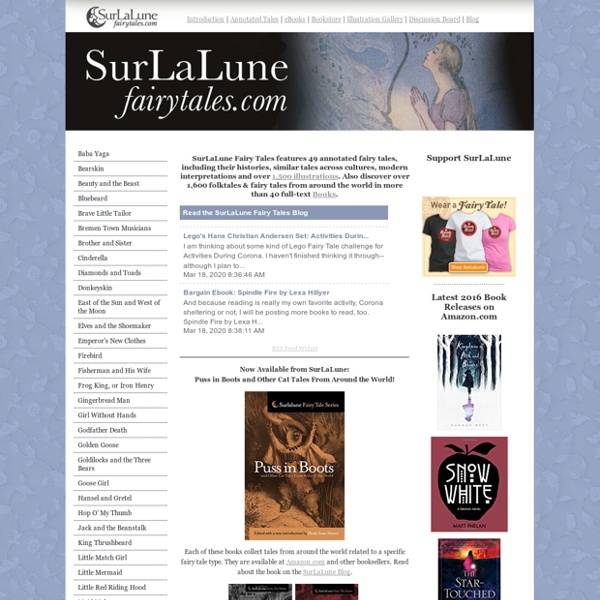 SurLaLune Fairy Tales features 49 annotated fairy tales, including their histories, similar tales across cultures, modern interpretations and over 1,500 illustrations. Also discover over 1,600 folktales & fairy tales from around the world in more than 40 full-text Books. Read the SurLaLune Blog where daily postings discuss fairy tales in popular culture and academia and more. Now Available from SurLaLune: Beauty and the Beast Tales From Around the World! Each of these books collect tales from around the world related to a specific fairy tale type. They are available at Amazon.com and other booksellers.

Themes & Things To Keep In Mind When Writing Fantasy Stories and Adventures « Daily Encounter This list is far from complete. It’s not even trying to be complete. It knows better than that. It just wants to be helpful and provide some inspiration here and there; you know, offer little suggestions that might lead to bigger ideas. (Especially by using the words offered as Wikipedia searches!) Folktexts: A library of folktales, folklore, fairy tales, and mythology, page 1 page 1 edited and/or translated by D.

Grace Coddington Ever since I saw "The September Issue", I've been fascinated by Grace Coddington. She truly tells a story every time she art directs a fashion shoot. In the December 2009 issue of American Vogue, you can see Graces interpretation of the fairy tale Hansel and Gretel. It stars one of my favorite models; Lily Cole, actor Andrew Garfield and popstar Lady GaGa. Can't wait to see the rest of the shoot in the issue. - pictures from Vogue The real Brothers Grimm were stranger than fiction Head over to Google's homepage on Thursday and you'll enjoy a scrollable comic strip telling the story of Little Red Riding Hood. The doodle celebrates the 200th anniversary of "Grimm's Fairy Tales," a compendium of European folk tales first published in 1812 by German brothers Jacob Ludwig Carl Grimm and Wilhelm Carl Grimm. Skip to next paragraph Subscribe Today to the Monitor

Resources Learning doesn't end at LHS when the main doors close.... Below are all the online database resources that are made available to all LHS students through the LHS CITGO Innovation Academy. Please feel free to utilize them in the off campus hours. Information on usernames and passwords have been emailed to all students and staff at the beginning of the 2018/19 school year; however, if you have any questions please use the button above to email the library staff and we will be happy to assist you. For all databases, please use the following to access:username: lemonths​password: flame Organized by country, content from this database helps users understand the unique characteristics of the world's nations and people in an increasingly globalized world.

Gnostic Society Library Almost all of the several dozen internet sites with collections of texts similar to our own obtained their material by directly or indirectly copying some files present at the Gnosis Archive. Ours was perhaps the first major collection of such texts to appear on "the web" in 1994, and thus has served as a source for others creating "their own" collections. Unfortunately transcription errors, typos, and primitive HTML formatting were present in the massive amount of material added to the Gnosis Archive in our first years; in a repeated process of "copying" they have been very widely propagated around the internet. Magical Fairytales - Eugenio Recuenco (10 photos) Eugenio Recuenco is an award-winning fashion photographer from Spain. His unique style has been referred to as "cinematographic" and "pictorial" and his work has been featured in magazines such as Vogue and Twill. Eugenio Recuenco

H.G. Wells H. G. Wells (1866-1946), English author, futurist, essayist, historian, socialist, and teacher wrote The War of the Worlds (1898); Get Tangled in These Mythical God Family Trees If a member of the royal family were coming to your home, you’d probably spruce it up a bit—maybe rearrange the furniture and plop some peonies into a vase. The king of Jaipur, however, went above and beyond what's expected of a host. In an effort to impress the Prince of Wales ahead of his state visit in 1876, it is widely believed that the king had the entire city painted pink. Nestled in the state of Rajasthan in northern India, Jaipur is about a one-hour flight from New Delhi. Today, this popular tourist site is affectionately known as the “Pink City,” but its streets weren’t always so rosy. Prior to a state visit from Prince Albert Edward—the eldest son of Queen Victoria and her consort, Prince Albert—Jaipur’s buildings were either white or a “sallow yellow,” according to The Rough Guide to India.

flavorwire Canadian photographer Lissy Laricchia riffs on fairy tales and children’s stories with a photo series depicting “characters who strive to stay in the real world,” with dirty feet and noses stuck in books. She photographs Belle, Alice, Wendy, Harry, and Arora suspended in a mid-air fantasy land, sucked in to their respective titles. The results — pairing ethereal photography with literature — is stunning.