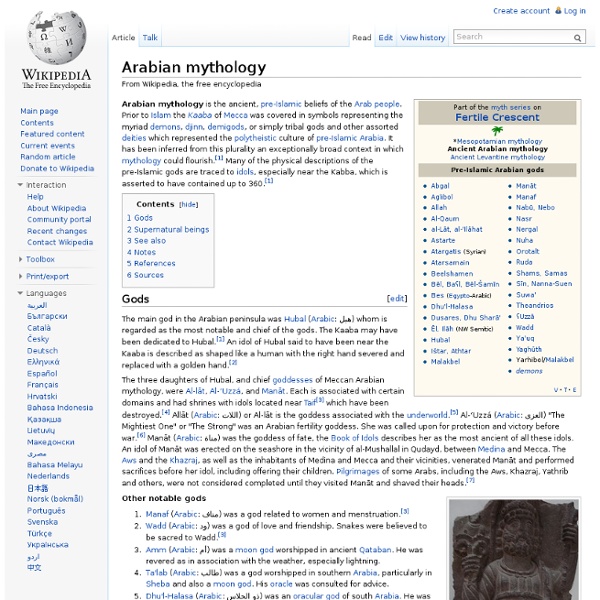 Arabian mythology is the ancient, pre-Islamic beliefs of the Arab people. Prior to Islam the Kaaba of Mecca was covered in symbols representing the myriad demons, djinn, demigods, or simply tribal gods and other assorted deities which represented the polytheistic culture of pre-Islamic Arabia. It has been inferred from this plurality an exceptionally broad context in which mythology could flourish.[1] Many of the physical descriptions of the pre-Islamic gods are traced to idols, especially near the Kaaba, which is asserted to have contained up to 360.[1] Gods[edit] The main god in the Arabian peninsula was Hubal (Arabic: هبل‎), who is regarded as the most notable and chief of the gods. An idol of Hubal said to have been near the Kaaba is described as shaped like a human with the right hand severed and replaced with a golden hand.[2] The three daughters of Hubal, and chief goddesses of Meccan Arabian mythology, were Al-lāt, Al-‘Uzzá, and Manāt. Other notable gods Supernatural beings[edit]

Jinn Imam Ali Conquers Jinn Unknown artist Ahsan-ol-Kobar 1568 Golestan Palace. Together, the jinn, humans and angels make up the three sapient creations of God. Like human beings, the jinn can be good, evil, or neutrally benevolent and hence have free will like humans and unlike angels.[3] Vedic mythology Vedic mythology refers to the mythological aspects of the historical Vedic religion and Vedic literature, alluded to in the hymns of the Rigveda. The central myth at the base of Vedic ritual surrounds Indra who, inebriated with Soma, slays the dragon (ahi) Vrtra, freeing the rivers, the cows and Dawn. It has directly[dubious ] contributed to the evolution and development of later Hinduism and Hindu mythology. Vedic mythology[edit] The Vedas in Puranic mythology[edit] The Vishnu Purana attributes the current arrangement of four Vedas to the mythical sage Vedavyasa.[2] Puranic tradition also postulates a single original Veda that, in varying accounts, was divided into three or four parts.

Armenian mythology Armenian mythology was strongly influenced by Zoroastrianism, with deities such as Aramazd, Mihr or Anahit, as well as Assyrian traditions, such as Barsamin, but there are fragmentary traces of native traditions, such as Hayk or Vahagn and Astghik. According to De Morgan there are signs which indicate that the Armenians were initially nature worshipers and that this faith in time was transformed to the worship of national gods, of which many were the equivalents of the gods in the Roman, Persian and Greek cultures. Georg Brandes described the Armenian gods in his book: “When Armenia accepted Christianity, it was not only the temples which were destroyed, but also the songs and poems about the old gods and heroes that the people sang.

Nasnas A nasnas (Arabic: نناسس‎ nasnās) is a monstrous creature in Arab folklore. According to Edward Lane, the 19th century translator of The Thousand and One Nights, a nasnas is "half a human being; having half a head, half a body, one arm, one leg, with which it hops with much agility". Robert Irwin The Arabian Nights: a Companion (Penguin, 1994)Jorge Luis Borges The Book of Imaginary Beasts (Penguin, 1974) Persian mythology Persian mythology are traditional tales and stories of ancient origin, all involving extraordinary or supernatural beings. Drawn from the legendary past of Iran, they reflect the attitudes of the society to which they first belonged - attitudes towards the confrontation of good and evil, the actions of the gods, yazats (lesser gods), and the exploits of heroes and fabulous creatures. Myths play a crucial part in Iranian culture and our understanding of them is increased when we consider them within the context of Iranian history. For this purpose we must ignore modern political boundaries and look at historical developments in the Greater Iran, a vast area covering parts of Central Asia well beyond the frontiers of present-day Iran. The geography of this region, with its high mountain ranges, plays a significant role in many of the mythological stories. Key texts[edit]

Hittite mythology Seated deity, late Hittite Empire (13th century BC) The understanding of Hittite mythology depends on readings of surviving stone carvings, deciphering of the iconology represented in seal stones, interpreting ground plans of temples: additionally, there are a few images of deities, for the Hittites often worshipped their gods through Huwasi stones, which represented deities and were treated as sacred objects. Gods were often depicted standing on the backs of their respective beasts, or may have been identifiable in their animal form.[3] Overview[edit] Priests and cult sites[edit] The liminal figure mediating between the intimately connected worlds of gods and mankind was the king and priest; in a ritual dating from the Hittite Old Kingdom period:

Bahamut Bahamut or Bahamoot (/bəˈhɑːmuːt/ bə-HAH-moot; Arabic: بهموت‎ Bahamūt) is a vast fish that supports the earth in Arabian mythology.[1][2] In some sources, Bahamut is described as having a head resembling a hippopotamus or elephant.[3] Overview[edit] In Arabic myth, Bahamut is a giant fish acting as one of the layers that supports the earth.[1] In Jorge Luis Borges' Book of Imaginary Beings, Bahamut is "altered and magnified"[2] from Behemoth, and described as so immense that a human cannot bear its sight; "[all] the seas of the world, placed in one of the fish's nostrils, would be like a mustard seed laid in the desert.

Hindu mythology Hindu mythology is a large body of traditional narratives related to Hinduism as contained in Sanskrit literature (such as the epics like Mahabharata and Ramayana, the Puranas, and the Vedas), Ancient Tamil literature (such as the Sangam literature and Periya Puranam), several other works, most notably the Bhagavata Purana, claiming the status of a Fifth Veda and other religious regional literature of South Asia. As such, it is a subset of Indian and Nepali culture. Rather than one consistent, monolithic structure, it is a range of diverse traditions, developed by different sects, people and philosophical schools, in different regions and at different times, which are not necessarily held by all Hindus to be literal accounts of historical events, but are taken to have deeper, often symbolic, meaning, and which have been given a complex range of interpretations.[1] Sources[edit] Vedas[edit] Itihasa and Puranas[edit]

Ishtar Ishtar (English pronunciation /ˈɪʃtɑːr/; Transliteration: DIŠTAR; Akkadian: 𒀭𒈹 ; Sumerian 𒀭𒌋𒁯) is the East Semitic Akkadian, Assyrian and Babylonian goddess of fertility, love, war, and sex.[1] She is the counterpart to the Sumerian Inanna, and is the cognate for the Northwest Semitic Aramean goddess Astarte. Characteristics[edit]

Classification of demons There have been various demonologies (classifications of demons) in Christian demonology and classical occultism and Renaissance magic. Classification systems are based on the nature of the demon, the sin with which they tempt people, the month in which their power was strongest, the saints that were their adversaries, or other characteristics. Classification by domain[edit] It can be noted that according to each author listed below, the domain of each demon is very different (with the exception of Francesco Maria Guazzo, who seem to have copied Michael Psellus with little difference).