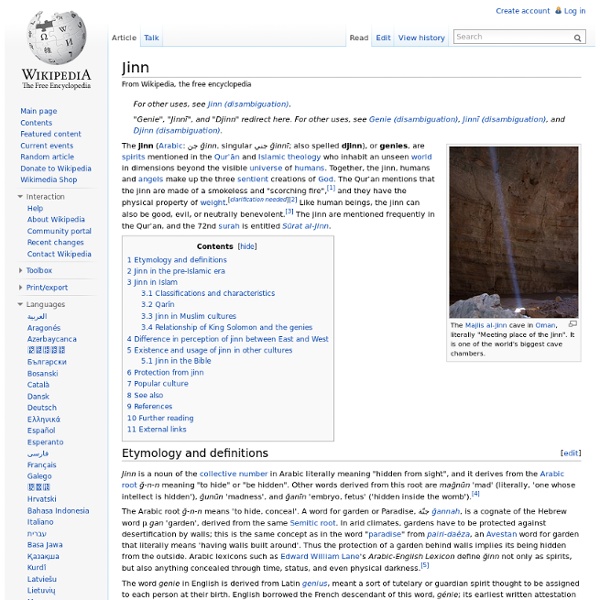 Imam Ali Conquers Jinn Unknown artist Ahsan-ol-Kobar 1568 Golestan Palace. Together, the jinn, humans and angels make up the three sapient creations of God. Like human beings, the jinn can be good, evil, or neutrally benevolent and hence have free will like humans and unlike angels.[3] Etymology and definitions[edit] Jinn is a noun of the collective number in Arabic literally meaning "hidden from sight", and it derives from the Arabic root j-n-n (pronounced: jann/ junn جَنّ / جُنّ) meaning "to hide" or "be hidden". In Arabic, the word jinn is in the collective number, translated in English as plural (e.g., "several genies"); jinnī is in the singulative number, used to refer to one individual, which is translated by the singular in English (e.g., "one genie"). In the pre-Islamic era[edit] Inscriptions found in Northwestern Arabia seem to indicate the worship of jinn, or at least their tributary status, hundreds of years before Islam. In Islam[edit] Classifications and characteristics[edit]

Klabautermann A Klabautermann on a ship, from Buch Zur See, 1885. A Klabautermann is a water kobold (or nix) who assists sailors and fishermen on the Baltic and North Sea in their duties. He is a merry and diligent creature, with an expert understanding of most watercraft, and an unsupressable musical talent. His image is of a small sailor in yellow with a tobacco pipe and woollen sailor's cap, often wearing a caulking hammer. Despite the positive attributes, there is one omen associated with his presence: no member of a ship blessed by his presence shall ever set eyes on him. More recently, the Klabautermann is sometimes described as having more sinister attributes, and blamed for things that go wrong on the ship. Klabautermann in fiction[edit] References[edit] Melville, F The Book of Faeries 2002 Quarto Publishing Jump up ^ Leander Petzoldt, Kleines Lexikon der Dämonen und Elementargeister, Becksche Reihe, 1990, p. 109.

Gargoyle Gargoyles of Notre-Dame de Paris Etymology[edit] The term originates from the French gargouille, which in English is likely to mean "throat" or is otherwise known as the "gullet";[2] cf. Latin gurgulio, gula, gargula ("gullet" or "throat") and similar words derived from the root gar, "to swallow", which represented the gurgling sound of water (e.g., Portuguese garganta, "throat"; gárgola, "gargoyle"). It is also connected to the French verb gargariser, which means "to gargle Legend of La Gargouille[edit] A French legend that sprang up around the name of St. History[edit] Many medieval cathedrals included gargoyles and chimeras. Both ornamented and unornamented water spouts projecting from roofs at parapet level were a common device used to shed rainwater from buildings until the early eighteenth century. Gargoyles and the Catholic Church[edit] Gargoyle representing a comical demon at the base of a pinnacle with two smaller gargoyles, Visby, Sweden Animal gargoyles[edit] Gallery[edit] Notes

Basilisk Accounts[edit] The basilisk is called "king" because it is reputed to have on its head a mitre- or crown-shaped crest. Stories of the basilisk show that it is not completely distinguished from the cockatrice. "There is the same power also in the serpent called the basilisk. Isidore of Seville defined the basilisk as the king of snakes, due to its killing glare and its poisonous breath. Theophilus Presbyter gives a long recipe in his book for creating a basilisk to convert copper into "Spanish gold" (De auro hyspanico). Albertus Magnus in the De animalibus wrote about the killing gaze of the basilisk, but he denied other legends, such as the rooster hatching the egg. Geoffrey Chaucer featured a basilicok (as he called it) in his Canterbury Tales. Stories gradually added to the basilisk's deadly capabilities, such as describing it as a larger beast, capable of breathing fire and killing with the sound of its voice. Origin[edit] Literary references[edit] See also[edit] References[edit]

Modern Times (1936) Norse funeral Norse funerals, or the burial customs of Viking Age North Germanic Norsemen (early medieval Scandinavians), are known both from archaeology and from historical accounts such as the Icelandic sagas, Old Norse poetry, and notably from the account of Ahmad ibn Fadlan. Throughout Scandinavia, there are many remaining tumuli in honour of Viking kings and chieftains, in addition to runestones and other memorials. Some of the most notable of them are at the Borre mound cemetery, in Norway, at Birka in Sweden and Lindholm Høje and Jelling in Denmark. A prominent tradition is that of the ship burial, where the deceased was laid in a boat, or a stone ship, and given grave offerings in accordance with his earthly status and profession, sometimes including sacrificed slaves. Afterwards, piles of stone and soil were usually laid on top of the remains in order to create a tumulus. Grave goods[edit] It was common to leave gifts with the deceased. Funerary monuments[edit] Rituals[edit] Human sacrifice[edit]

White Palace Death in Norse paganism The soul[edit] Funeral[edit] The grave goods had to be subjected to the same treatment as the body, if it was to accompany the dead person to the afterlife. It was common to burn the corpse and the grave offerings on a pyre, in which the temperature reached 1,400 degrees Celsius; much higher than modern crematorium furnaces attain. On the seventh day after the person had died, people celebrated the sjaund, or the funeral ale that the feast also was called since it involved a ritual drinking. Ancestor worship[edit] The grave is often described as an abode for the dead, and it was also the location of cultic rites. Afterlife[edit] Helgafjell[edit] Helgafjell, the "holy mountain" was one idea of the afterlife which appears in West Norse sources. Hel[edit] Valhalla[edit] Valhalla is an afterlife destination where half of those who die in battle gather as einherjar, a retinue gathered for one sole purpose: to remain fit for battle in preparation for the last great battle, Ragnarök. Fólkvangr[edit]