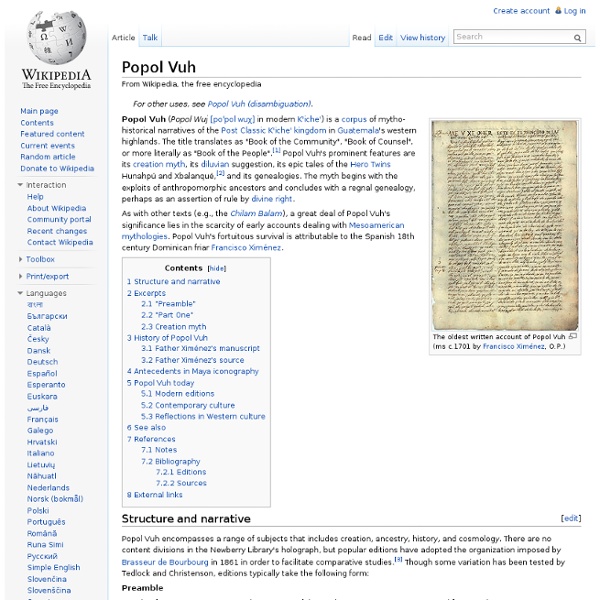 The oldest surviving written account of Popol Vuh (ms c.1701 by Francisco Ximénez, O.P.) Popol Vuh (Popol Wuj [poˈpol wuχ] in modern K'iche') is a corpus of mytho-historical narratives of the Post Classic K'iche' kingdom in Guatemala's western highlands. The title translates as "Book of the Community", "Book of Counsel", or more literally as "Book of the People".[1] Popol Vuh's prominent features are its creation myth, its diluvian suggestion, its epic tales of the Hero Twins Hunahpú and Xbalanqué,[2] and its genealogies. The myth begins with the exploits of anthropomorphic ancestors and concludes with a regnal genealogy, perhaps as an assertion of rule by divine right. As with other texts (e.g., the Chilam Balam), a great deal of Popol Vuh's significance lies in the scarcity of early accounts dealing with Mesoamerican mythologies. Structure[edit] Popol Vuh encompasses a range of subjects that includes creation, ancestry, history, and cosmology. Preamble Part 1 Part 2 Part 3 Part 4 Related:  mythology

The revival of an ancient science At the other end of the scientific spectrum of contemporary science an ancient science is being restored. For ages it has been preserved carefully. It is more or less an art form and it is called ‘sacred geometry’. Now why do we introduce sacred geometry in a book that is about contemporary and groundbreaking science? The archaic science of sacred geometry can be traced back to the Egyptian civilization but may well be a heritage from the civilisation of mythological Atlantis and we’ll provide sufficient clues in this book to sustain this claim. Surprisingly enough sacred geometry also shows up in many crop circles that have been appearing in the last two decades all over the world. What is far more interesting is that crop circles contain intelligent embedded geometry. In my opinion the significance of crop circles is that contemporary scientists are getting hints to seek for more understanding of geometry in physics in general and in the zero point field in particular. Platonic solids

- Lost Book of Thoth is Torah 2000 years of scholarly study of the bible and other scriptures and....No one noticed that To-Ra are the names of the Egyptian gods of Moon and sun? what else have 'they' missed? This entire website is dedicated to the author of the Torah a.k.a the lost book of Thoth This website is about how The god Thoth used the Word, letter combinations, programs, to create life. This is my Kabbalah, a linguistic prove that a creator god wrote all languages using hebrew letter and word meaning. But it seems that most people even those who profess to believe in god already have a different creator god, the one called evolution, a god who according to his followers did not plan life but somehow created billions of organisms and plants using trial and error, a god who is continuously creating by accidental changes of DNA programs. Finally, we need to keep in mind that the cell was created once 4 billion years ago, only half a billion years after earth was created and NEVER again!! Nature or god?

Opening of the mouth ceremony Priests of Anubis, the guide of the dead and the god of tombs and embalming, perform the opening of the mouth ritual The opening of the mouth ceremony (or ritual) was an ancient Egyptian ritual described in funerary texts such as the Pyramid Texts. Funerary magic[edit] The ceremony involved the symbolic animation of a statue or mummy by magically opening its mouth so that it could breathe and speak. The ancient Egyptians believed that in order for a person's soul to survive in the afterlife it would need to have food and water. The ceremony involved up to 75 "episodes" and, in its most complete version, included the following stages:[1] Episodes 1–9 Preliminary ritesEpisodes 10–22 Animation of the statueEpisodes 23–42 Meat offerings aligned with upper EgyptEpisodes 43–46 Meat offerings aligned with lower EgyptEpisodes 47–71 Funerary mealEpisodes 72–75 Closing rites The Book of the Dead also contains a spell for this process, which the deceased may use on themselves:[2] See also[edit]

The Wisdom of Thoth-Hermes: The Origin of Reason | Aquarian Philosophy “The lips of wisdom are closed, except to the ears of Understanding” — The Kybalion. As I work to complete my first book, “The Truth About Everything,” I have have begun to read many ancient texts and legends in order to uncover the ontological truths that, due to the obfuscation of the origin of man and our true history, has mainly survived through a type of veiled verbal symbolism, known as esotericism. The exoteric teachings are better known as the “outermost layer/surface level” that is taught as the verbatim “word of god”, which is the official way of preaching most of the world’s Judeo-Christian influenced theologies and is therefor not allowed to be challenged or questioned in anyway for it is not up to individual interpretation. Through the intentional changing of language throughout history, the origin of man has become just as veiled as the esoteric texts that are ascribed to them; take this into consideration while reading an excerpt from Manly P. The Book of Enoch

ANCIENT EGYPT : The Ten Keys of Hermes Trismegistos I, King Pepi, am THOTH, the mightiest of the gods ... Pyramid Texts, § 1237. I, said he, am POIMANDRES, the Mind of the Sovereignty. "Do You not know that You have become a God, and son of the One, even as I have ?" 1 The mental origin of the world and of man. 2 Corresponding harmonics. 3 Dynamics of alternation. 4 Bi-polarity and complementarity. 5 Cyclic repolarisation. 6 Cause and effect. 7 Gender. 8 The astrology of the Ogdoad. 9 The magic of the Ennead. 10 The alchemy of the Decad. "Content is Atum, father of the gods. With this great and might word, which issued from the mouth of THOTH for Osiris, the Treasurer of Life, Seal-bearer of the gods, Anubis, who claims hearts, claims Osiris King Pepi ... Hear O THOTH, in whom is the peace of the gods ... Abstract The religion of Ancient Egypt has been reconstructed by the Greeks (in the Hermetica), by the Abrahamic tradition (in their Scriptures) and by the Western Mystery Tradition (Hermeticism). Introduction

Ganymede Ganymede commonly refers to: Ganymede, Ganymed or Ganymedes may also refer to: Scriptorium - The Ogdoad The Ogdoad were the primeval forces of chaos in Egyptian mythology, represented as eight deities that existed before the creation of the sun god. The eight were considered as four couples, each embodying a different aspect of the primal world: Nun and Naunet, the god and goddess of the primordial waters; Kek and Keket, the deities of darkness; Amon and Amaunet representing invisible power; and Heh and Hehet representing infinity. Occasionally other couples were included in the Ogdoad, but eight was always the total number of deities involved. Between and from themselves, the Ogdoad created a mound that rose from the primeval waters, and on this they formed an egg from which the young sun god emerged. Thus they were sometimes depicted as baboons heralding the first sunrise, as in this papyrus (left) from around 1350BC, showing seven of the Ogdoad and Horus, the falcon form of the sun god Ra-Harakhty.

THE GREAT PAIR OF SCALES OF THE BOOK OF THE DEAD PAPYRUS CLOT BEY 9901 in The British Museum | Martin Otto-Keresztesi I Introduction1.1 CLOT BEY 9901The age, size and good condition of a papyrus in the British Museumwith the designation CLOT BEY 9901 are remarkable. In addition thelegibility of the writing is a special characteristic. The usualillegibility of many ancient Egyptian papyri requires muchorthographical research to be able to read them. Papyrus 9901 The Great Pair of Scales

River Styx Note to Submitters: As a result of our recent office move, the post office fire, funding concerns, and neighborhood rioting issues, we are a bit slower responding to submissions than usual. We are also currently spending a great deal of time responding to submission inquiries and withdrawals--time we don't have the staff for. If you sent us work before late October, it wasn't burned in the October post office fire. Guidelines for Writers Guidelines for Visual Artists To be considered, work must be received between September 1 and November 30. 5x7 or 8x10 photographs are preferred over slides, or we will consider links to online portfolios. Compensation River Styx is proud to be able to pay all of our contributors with a one-year subscription (3 issues, a $20 value), two contributor's copies, and cash payment (amount depending on our funding and the length of the work): a minimum of $25 per poem, $75 per prose piece, and $50 per illustration.