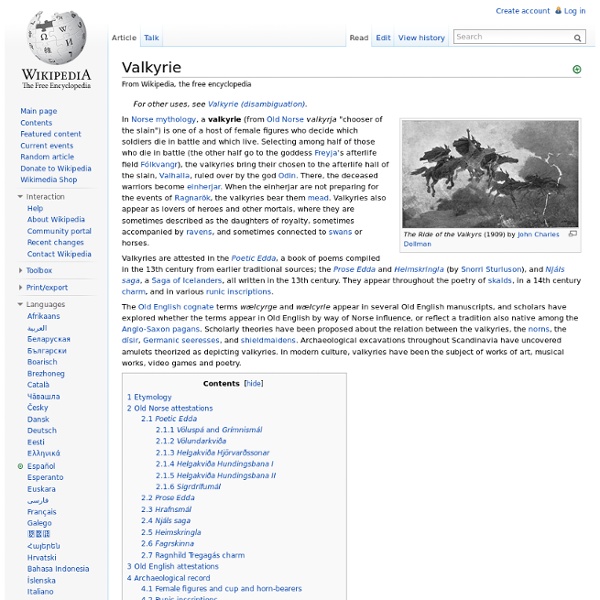 In Norse mythology, a valkyrie (from Old Norse valkyrja "chooser of the slain") is one of a host of female figures who decide which soldiers die in battle and which live. Selecting among half of those who die in battle (the other half go to the goddess Freyja's afterlife field Fólkvangr), the valkyries bring their chosen to the afterlife hall of the slain, Valhalla, ruled over by the god Odin. There, the deceased warriors become einherjar. When the einherjar are not preparing for the events of Ragnarök, the valkyries bear them mead. Valkyries also appear as lovers of heroes and other mortals, where they are sometimes described as the daughters of royalty, sometimes accompanied by ravens, and sometimes connected to swans or horses. Valkyries are attested in the Poetic Edda, a book of poems compiled in the 13th century from earlier traditional sources; the Prose Edda and Heimskringla (by Snorri Sturluson), and Njáls saga, a Saga of Icelanders, all written in the 13th century. Related:  Mythology • Asatru

Iku-Turso Description[edit] His appearance remains unclear, but he is described with several epithets: partalainen (the one who lives on the brink, or alternatively, the bearded one), Tuonen härkä (the ox of Tuoni, Death), tuhatpää (thousand-headed), tuhatsarvi (thousand-horned). It was sometimes said that he lived in Pohjola, but that may be because Pohjola was often perceived as the home of all evil. As a god of war[edit] Iku-Turso in Kalevala[edit] He is mentioned several times in the Finnish national epic, Kalevala. Later, Iku-Turso is summoned by Louhi, the Lady of the North, to stop the theft of the magical artefact Sampo. Two variants of tursaansydän (heart of Tursas), also known as mursunsydän (heart of walrus), an ancient Scandinavian symbol believed to bring good luck and protect from curses. Legacy[edit] One of the five submarines used by Finland in the Second World War was named after Iku-Turso. In popular culture[edit] See also[edit] Näkki [edit] Bibliography[edit]

Odin Etymology[edit] Odin's name is formed from "óðr" and the suffix "-inn". Old Norse had two different words spelled óðr, one an adjective and the other a noun. The adjective means "mad, frantic, furious, violent",[3] and is cognate with Old English wōd (hence the anglo-saxon Wōden).[4] The noun means "mind, wit, soul, sense" and "song, poetry".[5] Origin[edit] The 7th century Tängelgarda stone shows Odin leading a troop of warriors all bearing rings; Valknut symbols are drawn beneath his horse, which is depicted with four legs Originally, Odin was possibly considered mainly a shamanistic god and the leader of the war band. Parallels between Odin and the Celtic Lugus have often been pointed out. Adam of Bremen[edit] Written around 1080, one of the oldest written sources on pre-Christian Scandinavian religious practices is Adam of Bremen's Gesta Hammaburgensis ecclesiae pontificum. Poetic Edda[edit] Völuspá[edit] Lokasenna[edit] Hávamál[edit] The sacrifice of Odin (1895) by Lorenz Frølich

Freyja In Norse mythology, Freyja (; Old Norse for "(the) Lady") is a goddess associated with war, death, love, sex, beauty, fertility, gold, and seiðr. Freyja is the owner of the necklace Brísingamen, rides a chariot pulled by two cats, is accompanied by the boar Hildisvíni, and possesses a cloak of falcon feathers. By her husband Óðr, she is the mother of two daughters, Hnoss and Gersemi. Along with her brother Freyr, her father Njörðr, and her mother (Njörðr's sister, unnamed in sources), she is a member of the Vanir. Stemming from Old Norse Freyja, modern forms of the name include Freya, Freyia, and Freja. Freyja rules over her heavenly field, Fólkvangr, where she receives half of those who die in battle. Etymology and names[edit] The name Freyja transparently means (the) 'lady' and ultimately derives from Proto-Germanic *fraw(j)ōn. In addition to Freyja, Old Norse sources refer to the goddess by the following names: Attestations[edit] Poetic Edda[edit] The two go to see the beautiful Freyja.

Thor In Norse mythology, Thor (/θɔr/; from Old Norse Þórr) is a hammer-wielding god associated with thunder, lightning, storms, oak trees, strength, the protection of mankind, and also hallowing, healing and fertility. The cognate deity in wider Germanic mythology and paganism was known in Old English as Þunor and in Old High German as Donar (runic þonar ᚦᛟᚾᚨᚱ), stemming from a Common Germanic *Þunraz (meaning "thunder"). Ultimately stemming from Proto-Indo-European religion, Thor is a prominently mentioned god throughout the recorded history of the Germanic peoples, from the Roman occupation of regions of Germania, to the tribal expansions of the Migration Period, to his high popularity during the Viking Age, when, in the face of the process of the Christianization of Scandinavia, emblems of his hammer, Mjölnir, were worn in defiance and Norse pagan personal names containing the name of the god bear witness to his popularity. Name[edit] Attestations[edit] Roman era[edit] Post-Roman Era[edit]

Heimdallr Heimdallr brings forth the gift of the gods to mankind (1907) by Nils Asplund In Norse mythology, Heimdallr is a god who possesses the resounding horn Gjallarhorn, owns the golden-maned horse Gulltoppr, has gold teeth, and is the son of Nine Mothers. Heimdallr is attested as possessing foreknowledge, keen eyesight and hearing, is described as "the whitest of the gods", and keeps watch for the onset of Ragnarök while drinking fine mead in his dwelling Himinbjörg, located where the burning rainbow bridge Bifröst meets heaven. Heimdallr is attested in the Poetic Edda, compiled in the 13th century from earlier traditional material; in the Prose Edda and Heimskringla, both written in the 13th century by Snorri Sturluson; in the poetry of skalds; and on an Old Norse runic inscription found in England. Names and etymology[edit] Heimdallr also appears as Heimdalr and Heimdali. Heimdallr is attested as having three other names; Hallinskiði, Gullintanni, and Vindlér or Vindhlér. Attestations[edit]

norse-mythology The gods and other spiritual beings of Norse mythology are among the most wondrous and unique of any mythology. The Norse gods had very human-like personalities and frequently intervened in human affairs, but were larger-than-life and awe-inspiring in ways that decisively set them apart from mere humans. Their characters were often richly complex and multifaceted; one-dimensional epithets like “god of war” or “goddess of fertility” typically fail to describe anything more than one of their several aspects. The gods and goddesses weren’t the only spiritual entities the Vikings perceived and interacted with. The gods and other numinous creatures of the Norse world include: The Aesir gods and goddesses, the main tribe of deities. Finally, if you want to learn more about the Vikings’ conception of divinity in general – to go beyond who the gods were and take a look at what they were – then check out the article on Norse Theology.

Asgard In Norse religion, Asgard (Old Norse: ''Ásgarðr''; "Enclosure of the Æsir"[1]) is one of the Nine Worlds and home to the Æsir tribe of gods. It is surrounded by an incomplete wall attributed to a Hrimthurs riding the stallion Svaðilfari, according to Gylfaginning. Odin and his wife, Frigg, are the rulers of Asgard. One of Asgard's well known locations is Valhalla, in which Odin rules. Attestations[edit] In the Prose Edda, Gylfi, King of Sweden before the arrival of the Æsir under Odin, travels to Asgard, questions the three officials shown in the illumination concerning the Æsir, and is beguiled. The primary sources regarding Asgard come from the Prose Edda, written in the 13th century by Icelandic Snorri Sturluson, and the Poetic Edda, compiled in the 13th century from a basis of much older Skaldic poetry. Poetic Edda[edit] Völuspá, the first poem of the work, mentions many of the features and characters of Asgard portrayed by Snorri, such as Yggdrasil and Iðavöllr. Prose Edda[edit]

Hávamál Hávamál (English pronunciation: /ˈhɑːvəmɑːl/ HAH-və-mahl; "sayings of the high one") is presented as a single poem in the Poetic Edda, a collection of Old Norse poems from the Viking age. The poem, itself a combination of different poems, is largely gnomic, presenting advice for living, proper conduct and wisdom. The verses are attributed to Odin, much like the biblical Book of Wisdom is attributed to Solomon. The implicit attribution to Odin facilitated the accretion of various mythological material also dealing with Odin.[1] Textual history[edit] The only surviving source for Hávamál is the 13th century Codex Regius. To the gnomic core of the poem, other fragments and poems dealing with wisdom and proverbs accreted over time. Structure[edit] The Hávamál is edited in 165 stanzas by Bellows (1936). The poems in Hávamál is traditionally taken to consist of at least five independent parts, Stanzas 81-84 are in málaháttr, 85-88 in fornyrðislag. Contents[edit] Gestaþáttr[edit] you should look at,