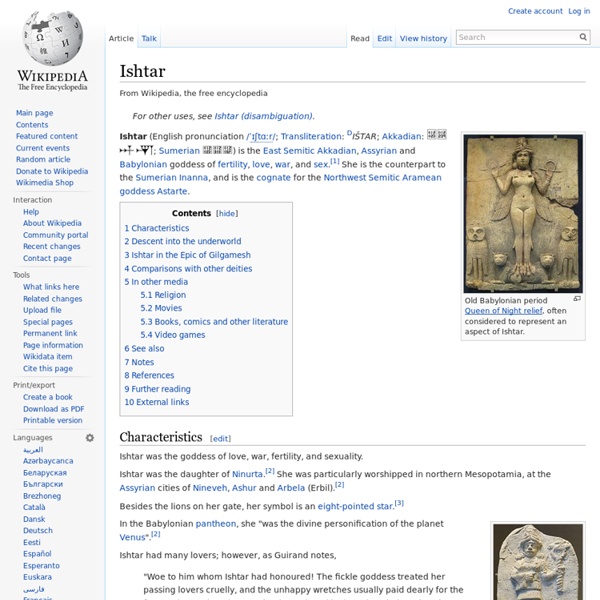 Ishtar (English pronunciation /ˈɪʃtɑːr/; Transliteration: DIŠTAR; Akkadian: 𒀭𒈹 ; Sumerian 𒀭𒌋𒁯) is the East Semitic Akkadian, Assyrian and Babylonian goddess of fertility, love, war, and sex.[1] She is the counterpart to the Sumerian Inanna, and is the cognate for the Northwest Semitic Aramean goddess Astarte. Characteristics[edit] Ishtar was the goddess of love, war, fertility, and sexuality. Ishtar was the daughter of Ninurta.[2] She was particularly worshipped in northern Mesopotamia, at the Assyrian cities of Nineveh, Ashur and Arbela (Erbil).[2] Besides the lions on her gate, her symbol is an eight-pointed star.[3] One type of depiction of Ishtar/Inanna Ishtar had many lovers; however, as Guirand notes, Descent into the underworld[edit] One of the most famous myths[5] about Ishtar describes her descent to the underworld. If thou openest not the gate to let me enter, I will break the door, I will wrench the lock, I will smash the door-posts, I will force the doors. In other media[edit]

Inanna Inanna (/ɪˈnænə/ or /ɪˈnɑːnə/; Cuneiform: 𒀭𒈹 DMUŠ3; Sumerian: Inanna; Akkadian: Ištar; Unicode: U+12239) is the Sumerian goddess of love, fertility, and warfare, and goddess of the E-Anna temple at the city of Uruk, her main centre. Part of the front of Inanna's temple from Uruk Origins[edit] Etymology[edit] Inanna's name derives from Lady of Heaven (Sumerian: nin-an-ak). Worship[edit] One version of the star symbol of Inanna/Ishtar Iconography[edit] Inanna's symbol is an eight-pointed star or a rosette.[10] She was associated with lions – even then a symbol of power – and was frequently depicted standing on the backs of two lionesses. Inanna as the star, Venus[edit] Inanna was associated with the celestial planet Venus. Inanna's Descent to the Underworld explains how Inanna is able to, unlike any other deity, descend into the netherworld and return to the heavens. Character[edit] Inanna is the goddess of love – but not marriage. Myths[edit] Enmerkar and the Lord of Aratta[edit]

Gaia (mythology) The Greek word γαῖα (transliterated as gaia) is a collateral form of γῆ[4] (gē, Doric γᾶ ga and probably δᾶ da)[5] meaning Earth,[6] a word of uncertain origin.[7] R. S. P. Beekes has suggested a Pre-Greek origin.[8] In Mycenean Greek Ma-ka (trans. as Ma-ga, "Mother Gaia") also contains the root ga-.[9][10] According to Hesiod, Gaia conceived further offspring with Uranus, first the giant one-eyed Cyclopes: Brontes ("Thunder"), Steropes ("Lightning") and Arges ("Bright");[16] then the Hecatonchires: Cottus, Briareos and Gyges, each with a hundred arms and fifty heads.[17] As each of the Cyclopes and Hecatonchires were born, Uranus hid them in a secret place within Gaia, causing her great pain. Because Cronus had learned from Gaia and Uranus, that he was destined to be overthrown by his own child, Cronus swallowed each of the children born to him by his Titan sister Rhea. With Gaia's advice[21] Zeus defeated the Titans. In classical art Gaia was represented in one of two ways.

Rhea (mythology) Rhea (or Cybele), after a marble, 1888. Then she hid Zeus in a cave on Mount Ida in Crete. According to varying versions of the story: Rhea only appears in Greek art from the fourth century BC, when her iconography draws on that of Cybele; the two therefore, often are indistinguishable;[10] both can be shown on a throne flanked by lions, riding a lion, or on a chariot drawn by two lions. In Roman religion, her counterpart Cybele was Magna Mater deorum Idaea, who was brought to Rome and was identified in Roman mythology as an ancestral Trojan deity. On a functional level, Rhea was thought equivalent to Roman Ops or Opis. Most often Rhea's symbol is a pair of lions, the ones that pulled her celestial chariot and were seen often, rampant, one on either side of the gateways through the walls to many cities in the ancient world. In Homer, Rhea is the mother of the gods, although not a universal mother like Cybele, the Phrygian Great Mother, with whom she was later identified.

Mother goddess Mother goddess is a term used to refer to a goddess who represents and/or is a personification of nature, motherhood, fertility, creation, destruction or who embodies the bounty of the Earth. When equated with the Earth or the natural world, such goddesses are sometimes referred to as Mother Earth or as the Earth Mother. Many different goddesses have represented motherhood in one way or another, and some have been associated with the birth of humanity as a whole, along with the universe and everything in it. Others have represented the fertility of the earth. Paleolithic figures[edit] The Venus of Dolní Věstonice, one of the earliest known depictions of the human body, dates to approximately 29,000–25,000 BC (Gravettian culture of the Upper Paleolithic era) Neolithic figures[edit] "Bird Lady" a Neolithic Egyptian ceramic, Naganda IIa Predynastic 3500-3400 BCE, Brooklyn Museum Old Europe[edit] Examples[edit] Egyptian[edit] Indigenous people of the Americas[edit] Aztec[edit] Anatolia[edit]

Artemis In the classical period of Greek mythology, Artemis (Ancient Greek: Ἄρτεμις) was often described as the daughter of Zeus and Leto, and the twin sister of Apollo. She was the Hellenic goddess of the hunt, wild animals, wilderness, childbirth, virginity and protector of young girls, bringing and relieving disease in women; she often was depicted as a huntress carrying a bow and arrows.[6] The deer and the cypress were sacred to her. In later Hellenistic times, she even assumed the ancient role of Eileithyia in aiding childbirth. Etymology Didrachm from Ephesus, Ionia, representing the goddess Artemis Silver tetradrachm of the Indo-Greek king Artemidoros (whose name means "gift of Artemis"), c. 85 BCE, featuring Artemis with a drawn bow and a quiver on her back on the reverse of the coin Artemis in mythology Leto bore Apollon and Artemis, delighting in arrows, Both of lovely shape like none of the heavenly gods, As she joined in love to the Aegis-bearing ruler. Birth Childhood Intimacy Actaeon