Ordering the Heavens: A Visual History of Mapping the Universe 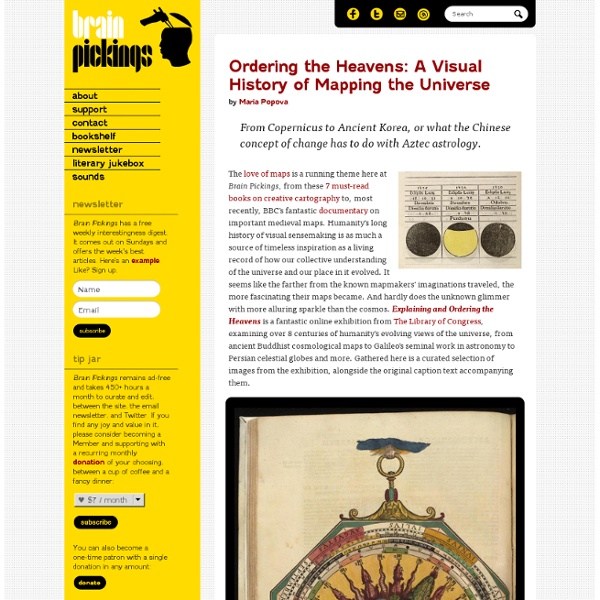 by Maria Popova From Copernicus to Ancient Korea, or what the Chinese concept of change has to do with Aztec astrology. The love of maps is a running theme here at Brain Pickings, from these 7 must-read books on creative cartography to, most recently, BBC’s fantastic documentary on important medieval maps. Humanity’s long history of visual sensemaking is as much a source of timeless inspiration as a living record of how our collective understanding of the universe and our place in it evolved. It seems like the farther from the known mapmakers’ imaginations traveled, the more fascinating their maps became. And hardly does the unknown glimmer with more alluring sparkle than the cosmos. The Emperor's Astronomy Petrus Apianus. The 'Emperor's Astronomy'(dedicated to the Holy Roman Emperor Charles V) elegantly depicts the cosmos and heavens according to the 1400-year-old Ptolemaic system, which maintained that the sun revolved around the earth. Popular Sixteenth-Century Scientific Work Related:  Liu Hui Pi • mythology • brainpickings

Development of Mathematics in Ancient China Development of Mathematics in Ancient China Chinese Math Texts The history of Chinese math and mathematicians was mostly lost or destroyed over the centuries. For example, the despotic emperor Shih Huang-ti of the Ch'in dynasty (221-207 B.C.) ordered the burning of books in 213 B.C. Scholars in the following Han period (206 B.C. to 220 A.D.) had to transcribe China's literary and scientifice traditions from memory or remaining fragments of scroll. Knowledge of astronomy and other areas was often handed down from father to son, and only later recorded in texts. Since the 16 century, Chinese math history has also been denied and ignored in the Western dominance of science and technology, both inside and outside China. However, there are several existing Chinese applied mathematics texts, which are collections of problems and solutions organized in chapters according to their practical applications. Chou Pei Chiu Chang Another 3rd century B.C. Other Texts

Family tree of the Greek gods Key: The essential Olympians' names are given in bold font. See also List of Greek mythological figures Notes External links Media related to Family trees of Greek mythology at Wikimedia Commons Built to Last: The Illustrated Secrets of Mankind's Greatest Structures by Maria Popova What gargoyles and mosques have to do with King Edward I and the secrets of Ancient Rome. Castles. Cathedrals. Mosques. A reference model for the ribs of the vaulting on the roof truss Laying out the drawing of the roof trusses A quick reference model for the roof trusses An early sketch of the flying buttresses and one gargoyle Sketch for the kitchen scene while making dinner fit for a king Macaulay modeling for the drawing of King Edward I. Whether the three building types in this book were built to last or simply to impress, they were certainly constructed with determination and care. Combining rigorous research, poetic illustration and the captivating human stories behind these architectural marvels, Built to Last is equal parts illuminating and inspirational, brimming with a kind of visceral curiosity that makes Macaulay’s timeless drawings spring to life. Brain Pickings has a free weekly newsletter and people say it’s cool. Share on Tumblr

Liu Hui | Liu Hui and his mathematic career Liu Hui (fl. 3rd century) was one of the most renowned mathematicians in ancient China (primarily account his fame to his method for approximating pi). (One version of portrait of Liu Hui) He solved all the problems on 九章算術 (which is more prevalently known as ‘The Nine Chapters on the Mathematical Art‘ (In ancient Chinese, arithmetics has the same meaning as ‘mathematical art’)) and made his own version of compilation out of it named 九章算術註 (‘Commentary on the Nine Chapters’). (image of ‘Nine Chapters on the Mathematical Art‘) Furthermore, Liu Hui also wrote and published his own book 海島算經 (‘Sea Island Mathematical Manual‘) in year 263 C.E.. (image of ‘Sea Island Mathematical Manual‘) Liu Hui devoted his whole life working on exploring the subject of mathematics, applied mathematics and surveying methodology. Liu Hui’s achievements on mathematics could be roughly categorized into two aspects: 1. a. b. c. (Liu Hui’s proof of Pythagorean Theorem) 2. a. b. (simulated model of ‘double box lid’)

Greek Gods Family Tree ludios.org Spomenik: Retrofuturistic Monuments of the Eastern Bloc by Maria Popova The ghosts of communism, or what alien architecture has to do with societal memory and Serbia’s mountains. Having grown up in the former Eastern Bloc, I vividly remember the bizarre and beautiful monuments commissioned by the communist leaders of the 1960s and 70s, which remained as retrofuturistic remnants after the fall of communism, like the undying ghosts of an era most sought to forget but would always remember. These are the subject of Spomenik — a peculiar book by contemporary Belgian photographer Jan Kempenaers, who took a laborious trek across former Yugoslavia and The Balkans to photograph the strikingly beautiful yet odd structures tucked away in the region’s mountains. The results are haunting and eerily powerful, evoking a felt sense of a fold in the space-time fabric of sociopolitical reality. Kempenaers did not set out as a documentary photographer, but first and foremost as an artist seeking to create a new image. Podgaric Kruševo Kozara Petrova Gora Kosmaj Niš

Liu Hui’s pi algorithm | Deconstructing Masculinities in South Korean Culture Cyclotomic method: Liu Hui used the area of n-gon inscribed in a circle (with n being the larger the better) to estimate the area of a circle. In his own word, he said that “The finer the circle being cut, the smaller error we get when we estimate; if we continue to cut until the polygon can’t be cut any more, then the area of this polygon yields the area of the circle”. It is worth noticing that his method coincides with the modern infinite series methodology of estimation. (Liu Hui’s approximation of pi using n-gon) (Details about Liu’s pi algorithm) The image below is an example of Liu’s method of calculating the area of 2n-gon inscribed in a circle. Basically we have already calculated the area of n-gon before, and the area of triangle AOB is 1/n of the area of the n-gon. We know that OA = OB = OC = r, while AB (side length of the n-gon, which is known) = l. We have that AG = GB = l/2, and that OG = sqrt(BO^2-BG^2) = sqrt(r^2-l^2/4). Thus CG = OC – OG = r – sqrt(r^2-l^2/4). Like this:

Who are the Happy Gods? Who are the happy gods?(if you are going to worship a god, it might as well be a happy one) Achelois (Greek goddess) Achelois means "she who drives away pain", and she was a Moon Goddess. Minor Greek Goddesses: A-E Aphrodite (Greek goddess) Aphrodite is the goddess of love, beauty and sexual rapture.She loved gaiety and glamour Goddesses and Gods Love and Sexuality Apollo (Greek god) Apollo is in many respects the paradigm of a Greek god. Ame-no-uzume (Japanese goddess) "The dance of the goddess Ame-no-Uzume grew wilder as she recalled a thousand orgasms she had enjoyed: her nipples stiffened and she felt her sex open when she remembered the phalluses of the countless lovers who had penetrated her. Anna Perenna (Roman goddess) Goddess of the New Year, provider of food. Bacchus (Roman god) God of Wine and Intoxication. Bastet (Egyptian goddess) A woman with the head of a domesticated cat, sometimes holding a sistrum. Baubo (Greek goddess) Baubo appears in the story of Demeter & Persephone.

The Lost Thing: A Whimsical Story about Belonging by Shaun Tan by Maria Popova What a bizarre, fantastical creature can teach us about human nature and social concerns. Last year, I raved about The Lost Thing, a lovely cross-platform gem by acclaimed Australian author and illustrator Shaun Tan. (Who recently gave an interview only in drawings.) What started out as an amusing nonsensical story soon developed into a fable about all sorts of social concerns, with a rather ambiguous ending. The film itself is an absolute treat, its sound effects alone a work of art: In addition to the book, The Lost Thing is available on DVD and iTunes, narrated by none other than the brilliant Tim Minchin. For a megadose of Tan’s genius, it doesn’t get better than Lost and Found — an anthology of three of his most beloved children’s stories: The Red Tree, The Lost Thing and The Rabbits. Brain Pickings has a free weekly newsletter and people say it’s cool. Share on Tumblr

Am I in Pi? Checking 1254543 digits of I found starting at this location in PI: This document will tell you where in PI your birthday first occurs.. E.G., If you were born Feb 20th 1969 search for: 22069 No spaces... For those that dont remember, PI is the big(*) number that begins with three. Thanks to Arthur Bebak (arthur@msm.com) for the idea... * It has been brought to my attention that PI is not really all that "big", per se -- 4 being given as an example of a number bigger than PI.

Baltic mythology Baltic mythology is the body of mythology of the Baltic people stemming from Baltic paganism and continuing after Christianization and into Baltic folklore. Baltic mythology ultimately stems from Proto-Indo-European mythology. The Baltic region was one of the last regions of Europe to be Christianized, a process that occurred from the 15th century and into at least a century after. While no native texts survive detailing the mythology of the Baltic peoples during the pagan period, knowledge of the mythology may be gained from Russian and German chronicles, later folklore, by way of etymology, and comparative mythology.[1] While the early chronicles (14th and 15th century) were largely the product of missionaries who sought to eradicate the native paganism of the Baltic peoples, rich material survives into Baltic folklore. See also[edit] Notes[edit] References[edit]