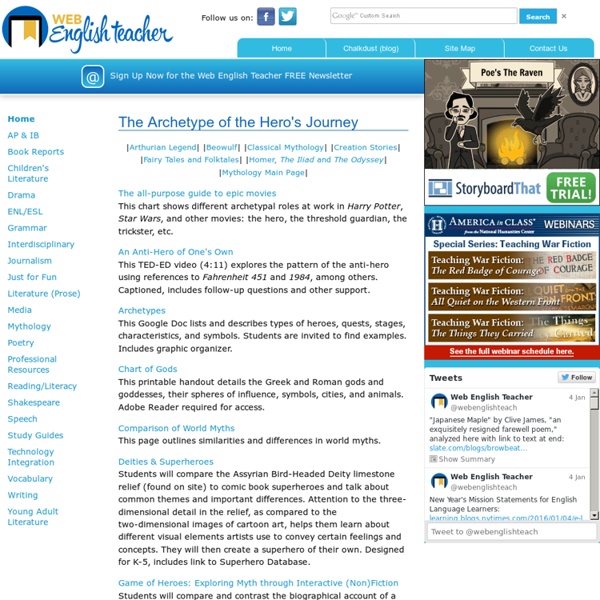 Beowulf and Star Wars BEOWULF AND STAR WARS with references to Episode III and Jung THE FOREMOST MYTHOLOGIST OF OUR DAY, JOSEPH CAMPBELL wrote a book called The Hero With a Thousand Faces, in which he noted that whatever the name or face: Achilles, Odysseus, Telemachus, Oedipus, Beowulf, Capts. Kirk, Picard, Janeway, Sisko or Luke Skywalker and even Darth Vader, the quest and the adventure is the same. The Hero must undergo a series of adventures that "make his day" and save the home, nation, planet or galaxy from destruction--in other words, confront evil and attempt to defeat it. By calling on key scenes from Beowulf and comparing them with Star Wars, we will see the transformation of the hero from a novice to one ready to confront his destiny, and in so doing we gain a modern insight into the problem of evil. George Lucas CREATOR OF STAR WARS Campbell, Joseph. IN MYTHOLOGY, the hero's journey begins with the "call to adventure." THE NEXT STEP IN THE HERO QUEST is a challenge to mortal combat.

U-M Fantasy and Science Fiction Website Welcome one and all to the University of Michigan Fantasy and Science Fiction Home Pages. We hope you find this page a valuable resource. These pages are dedicated to assisting scholars of all types all over the world. We are constantly striving to provide an extensive and useful location for all types of information and tools that will help us study fantasy and science fiction. Olaf Stapledon said it best when he wrote: "Did not our life issue daily as more or less firm threads of active living, and mesh itself into the growing web, the intricate, ever-proliferating pattern of mankind?" And with that, Fantasy and Science Fiction lovers at the University of Michigan and all over the world enter the next growing web of mankind - the World Wide Web! These pages are the result of a collaboration among several people over many years. This site has been named on of the top 5% of all the sites on the web by Point Communications Corporation. Site Index

13.01.11: Game of Heroes: Exploring Myth through Interactive (Non) Fiction Overview In this middle school unit on mythology, Joseph Campbell's Monomyth cycle will be the tool to analyze the hero's journey of both fictional and non fictional figures. Students will compare and contrast the biographical account of a real life hero with the mythical quest of a demigod; Theseus and Hercules can be studied side by side with Gandhi and Martin Luther King. Students will ultimately fuse their understandings of the metaphorical journey to view their own selves as heroes through their experiences of challenge and reward in the past and the potential opportunities and treasures of the future. Students will understand that the vast plethora of modern day superheroes, video game avatars, and movie stars, all form and inform our personal mythologies, or way of viewing and imagining the world, and that all of them follow the same general pattern. The final project of the unit will be the creation of a text based computer adventure game, or "interactive (non)fiction." 1. 2.

The Hero with a Thousand Faces The Hero with a Thousand Faces (first published in 1949) is a work of comparative mythology by Joseph Campbell. In this book, Campbell discusses his theory of the mythological structure of the journey of the archetypal hero found in world myths. Since the publication of The Hero with a Thousand Faces, Campbell's theory has been consciously applied by a wide variety of modern writers and artists. Filmmaker George Lucas acknowledged Campbell's theory in mythology, and its influence on the Star Wars films.[1] Summary[edit] Campbell explores the theory that mythological narratives frequently share a fundamental structure. A hero ventures forth from the world of common day into a region of supernatural wonder: fabulous forces are there encountered and a decisive victory is won: the hero comes back from this mysterious adventure with the power to bestow boons on his fellow man.[3] In laying out the monomyth, Campbell describes a number of stages or steps along this journey. Background[edit]

Jetters Visions About Shark Tank TV Show Series Shark Tank, the critically-acclaimed reality showthat has reinvigorated entrepreneurship in America, has also become a culturally defining series. The recipient of the 2014 Emmy Award for Outstanding Structured Reality Program, the business-themed show has returned to the ABC Television Network for its sixth season. The Sharks -- tough, self-made, multi-millionaire and billionaire tycoons -- continue their search to invest in the best businesses and products that America has to offer. The Sharks will once again give people from all walks of life the chance to chase the American dream, and potentially secure business deals that could make them millionaires. The Sharks are: billionaire Mark Cuban, owner and chairman of AXS TV and outspoken owner of the 2011 NBA championship Dallas Mavericks; real estate mogul Barbara Corcoran; "Queen of QVC" Lori Greiner; technology innovator Robert Herjavec; fashion and branding expert Daymond John; and venture capitalist Kevin O'Leary.

Hero's Journey The hero's journey is an ancient story pattern that can be found in texts from thousands of years ago or in newly released Hollywood blockbusters. This interactive tool will provide students with background on the hero's journey and give them a chance to explore several of the journey's key elements. Students can use the tool to record examples from a hero's journey they have read or viewed or to plan out a hero's journey of their own. Grades 6 – 8 | Lesson Plan | Standard Lesson Fantastic Characters: Analyzing and Creating Superheroes and Villains Students analyze characterization by creating their own superheroes or super-villains, complete with related gadgets and settings. Grades 7 – 12 | Calendar Activity | July 31 J.K. Students are encouraged to think about why people challenge Harry Potter books, do a Web Quest that allows them to research the issue, and decide whether the books should be banned from the public library. Grades 7 – 12 | Calendar Activity | January 3

Analemma In astronomy , an ( / ˌ æ n ə ˈ l ɛ m ə / ; from Greek ἀνάλημμα "pedestal of a sundial ") is a curve representing the changing angular offset of a celestial body (usually the Sun ) from its on the celestial sphere as viewed from another celestial body (usually the Earth). The term is used when the observed body appears, as seen from the viewing body, to move in a way that is repeated at regular intervals, such as once a year or once a day. The analemma is then a closed curve, which does not change. Because of the Earth's annual revolution around the Sun in an orbit that is elliptical and tilted relative to the plane of the equator, an observer at a fixed point on the Earth sees the Sun appear to move in an analemma around a mean position, taking a year to do so. The mean position appears to revolve around the Earth once every mean solar day , because of the Earth's rotation. This daily revolution is not considered to be averaged out to get the mean. [ edit ] Description Mars : teardrop

Home : Inform hero's journey "A Practical Guide to Joseph Cambell’s The Hero with a Thousand Faces" by Christopher Vogler © 1985 “There are only two or three human stories, and they go on repeating themselves as fiercely as if they had never happened before.” In the long run, one of the most influential books of the 20th century may turn out to be Joseph Campbell’s THE HERO WITH A THOUSAND FACES. The book and the ideas in it are having a major impact on writing and story-telling, but above all on movie-making. Filmmakers like John Boorman, George Miller, Steven Spielberg, George Lucas, and Francis Coppola owe their successes in part to the ageless patterns that Joseph Campbell identifies in the book. The ideas Campbell presents in this and other books are an excellent set of analytical tools. With them you can almost always determine what’s wrong with a story that’s floundering; and you can find a better solution almost any story problem by examining the pattern laid out in the book. There’s nothing new in the book.

Mythical Creatures List, Mythical Creatures A-Z Epic/ Epic Poem/ Epic Hero by Anna Aurand on Prezi Christopher Vogler's "Hero's Journey" (Revised July 2007) I spent nearly sixteen years avoiding reading anything of substance by (Hollywood) story theorists such as Syd Field, John Truby, Christopher Vogler, Robert McKee and others. As co-creator of the Dramatica theory of story, I didn't want to influence my development of Dramatica so I avoided direct interaction with competing theories. In 2006 I decided to lift my self-imposed ban. Originally written as a series of articles, I’ve reworked my findings into this single paper. There are dozens of “how to” books on story structure, especially in the screenwriting field. SYD FIELD: I watched Syd Field's video, "Screenwriting Workshop." Though the six non-Dramatica story paradigms I studied are different in their specifics, I was surprised to find that most more or less fit into one of two broad categories. By contrast, Dramatica does not fall neatly into either category. What bugged me was that there seemed to be some "Truth" to his observations about character and plot.

Greek Gods Family Tree Doing homework? Your teacher has already seen this. See Theoi; it has properly-sourced information. Known errors: Generally inconsistent sourcing. This chart was made in 2004, and Wikipedia was treated as a primary source.