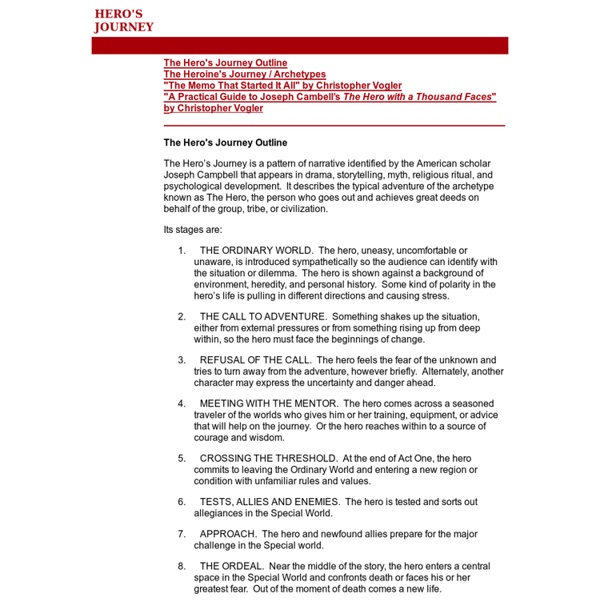 "A Practical Guide to Joseph Cambell’s The Hero with a Thousand Faces" by Christopher Vogler © 1985 “There are only two or three human stories, and they go on repeating themselves as fiercely as if they had never happened before.” In the long run, one of the most influential books of the 20th century may turn out to be Joseph Campbell’s THE HERO WITH A THOUSAND FACES. The book and the ideas in it are having a major impact on writing and story-telling, but above all on movie-making. Filmmakers like John Boorman, George Miller, Steven Spielberg, George Lucas, and Francis Coppola owe their successes in part to the ageless patterns that Joseph Campbell identifies in the book. The ideas Campbell presents in this and other books are an excellent set of analytical tools. With them you can almost always determine what’s wrong with a story that’s floundering; and you can find a better solution almost any story problem by examining the pattern laid out in the book. There’s nothing new in the book.

25 Ways To Plot, Plan and Prep Your Story I’m a panster at heart, plotter by necessity — and I always advocate learning how to plot and plan because inevitably someone on the business side of things is going to poke you with a pointy stick and say, “I want this.” Thus you will demonstrate your talent. Even so, in choosing to plot on your own, you aren’t limited to a single path. And so it is that we take a look at the myriad plotting techniques (“plotniques?”) you might use as Storyteller Extraordinaire to get the motherfucking job done. Let us begin.

Folktexts: A library of folktales, folklore, fairy tales, and mythology, page 1 page 1 edited and/or translated by D. L. Ashliman University of Pittsburgh hero's journey "A Practical Guide to Joseph Cambell’s The Hero with a Thousand Faces" by Christopher Vogler © 1985 “There are only two or three human stories, and they go on repeating themselves as fiercely as if they had never happened before.” In the long run, one of the most influential books of the 20th century may turn out to be Joseph Campbell’s THE HERO WITH A THOUSAND FACES. The book and the ideas in it are having a major impact on writing and story-telling, but above all on movie-making. Filmmakers like John Boorman, George Miller, Steven Spielberg, George Lucas, and Francis Coppola owe their successes in part to the ageless patterns that Joseph Campbell identifies in the book. The ideas Campbell presents in this and other books are an excellent set of analytical tools.

Savage Everything! So I've just finished Season 2 of The Walking Dead, and there are some things I think are worth updating regarding Clementine. This is our first character update, but I'll be leaving the text of the previous post below in case people are still interested. Note that this is not strictly character progression; I've altered several stats and levels from my original iteration to better match what she's shaped up to be able to do. It's also worth noting that I will stat her as I played her, simply for ease of Hindrances. Name: ClementineRace: HumanExperience: 70 (Heroic) Agility d8; Smarts d8; Spirit d8; Strength d4; Vigor d6 Pace 6; Parry 5; Charisma 0; Toughness 5Hindrances: Young, Loyal, Pacifist (m)Edges: Alertness, Great Luck, Elan, Common Bond, Marksman, ExtractionSkills: Climbing d6, Fighting d6, Healing d6, Intimidation d4, Notice d6, Persuasion d6, Shooting d8, Stealth d6, Survival d6Inventory: Hat, Jacket, Ice Pick (Str+d4), Hatchet (Str+d4), Pistol (2d6, AP 1, 12/24/48)

Notes and diagrams show how famous authors including J.K. Rowling and Sylvia Plath planned out their novels By Tara Brady Published: 13:33 EST, 18 May 2013 | Updated: 20:52 EST, 19 May 2013 Gathering your thoughts when writing a novel can be a tricky process. Which is why many of the greats made sure they planned their plots beforehand. A mini-collection of notes penned by writers including James Salter and J.K.

Gnostic Society Library Almost all of the several dozen internet sites with collections of texts similar to our own obtained their material by directly or indirectly copying some files present at the Gnosis Archive. Ours was perhaps the first major collection of such texts to appear on "the web" in 1994, and thus has served as a source for others creating "their own" collections. Unfortunately transcription errors, typos, and primitive HTML formatting were present in the massive amount of material added to the Gnosis Archive in our first years; in a repeated process of "copying" they have been very widely propagated around the internet. Over nearly two decades we have made many corrections to these texts. It appears that few of the sites copying material from this collection have taken the time to read, edit and correct the texts! This is of course exactly how the manuscript tradition has propagated errors in the past centuries, though with vastly different technologies of reproduction.

The Walking Dead: a tentacular transmedia success… Even if the figure of the zombie appeared only relatively recently in popular western culture (1), it has enjoyed almost continuous success since the 60s and the release of Night Of The Living Dead by Romero. A success that the series The Walking Dead is definitely being driven by, inspired by the series of comic books of the same name created by Robert Kirkman in 2003. With the help of the film director Frank Darabont, he also contributed towards its adaptation for the American channel AMC, which has been showing the series since September 2010 The plot of The Walking Dead revolves around the character Rick Grimes, a police officer who discovers when coming out of a prolonged coma that the majority of the human race has been transformed into zombies. Along with other survivors, he attempts to eke out an existence in the heart of an America that has been devastated and invaded by the hordes of the living dead. Even for the television, AMC does not simply show the episodes in the series.

Dungeon Dozen Fan Index After Zak S. mentioned that the totally sweet Dungeon Dozen posts were not organized in any way besides by date and a few tags right after I started reading the archives from the beginning, I decided I could do a good deed and organize stuff as I go. So, here it is. It is currently up to date, and I plan to keep it so as new posts are added. If I haven't for awhile, feel free to poke me. The Plot Skeleton: How to Write a Plot Outline Writing a novel is no easy task. One of the things that will likely help you get your plot organized, however, is a plot outline, or plot skeleton. There are many names for a plot outline; one of our favorites is the plot skeleton. Some people also call it "the universal plot," while others simply call it "basic structure."

Get Tangled in These Mythical God Family Trees If a member of the royal family were coming to your home, you’d probably spruce it up a bit—maybe rearrange the furniture and plop some peonies into a vase. The king of Jaipur, however, went above and beyond what's expected of a host. In an effort to impress the Prince of Wales ahead of his state visit in 1876, it is widely believed that the king had the entire city painted pink. Nestled in the state of Rajasthan in northern India, Jaipur is about a one-hour flight from New Delhi. Today, this popular tourist site is affectionately known as the “Pink City,” but its streets weren’t always so rosy. Fandom powered by Wikia “It is the ponderous collection of lies, damned lies, and half-truths from which the entire Halo Universe is constructed.” The Halo Story Bible, created by Bungie Studios, is the single most important object to the development of the Halo Universe. The Story Bible contains information on all the canon that has been developed. Background Edit

Meanwhile Back in The Dungeon... meanwhilebackinthedungeon: Armor Mechanic as Obvious Attempt to have Nude Characters in Game…If you wanna get some more of that tangy Appendix N flavor into your games, where nude magic users battle scantily-clad warriors in the grand Sword & Sorcery tradition of yore — I suggest adopting this simple modification to Armor or Defense Class:Skyclad CharactersEssentially, if a player is willing to have their character adventure in the buff, that character adds, or subtracts, their Charisma or appearance modifier to their Armor Class or Defense.But if you really wanna be encouraging, they could use double their charisma modifier as their Skyclad Bonus. Make Sense? illustration of Skyclad Human Sorceress by Frank Frazetta

Writing an Outline of Your Novel By Glen C. Strathy* The final stage of preparation - writing an outline for your novel - builds on everything you have done so far. So if you haven't yet read the following articles, you may want to do so before we go further: Part 1: Choosing an Idea.Part 2: Choosing a Story Goal.Part 3: Creating a Plot Outline in 8 Easy Steps.Part 4: Plot DevelopmentPart 5: Creating Archetypal Characters.Part 6: Making Characters Memorable and Believable.Part 7: Choosing Your Main Character and His/Her Essential CounterpartPart 8: Choosing a SettingPart 9: Choosing a Theme Naturally, you don't have to follow these articles step-by-step in order.

Snow Leopard ConservancySnow Leopard Conservancy By Dr. John Mock 2004 Pari are female supernatural denizens of the high mountains. People in Pakistan, Afghanistan, north India and throughout Central Asia are familiar with pari. The Wakhi ethnic population in northern Pakistan, China, Tajikistan and Afghanistan have their own word for pari: mergichan.