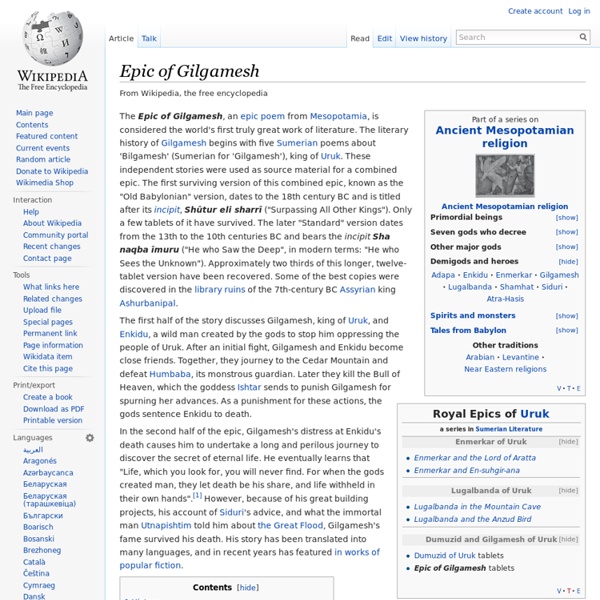 The Epic of Gilgamesh, an epic poem from Mesopotamia, is considered the world's first truly great work of literature. The literary history of Gilgamesh begins with five Sumerian poems about 'Bilgamesh' (Sumerian for 'Gilgamesh'), king of Uruk. These independent stories were used as source material for a combined epic. The first surviving version of this combined epic, known as the "Old Babylonian" version, dates to the 18th century BC and is titled after its incipit, Shūtur eli sharrī ("Surpassing All Other Kings"). Only a few tablets of it have survived. The first half of the story discusses Gilgamesh, king of Uruk, and Enkidu, a wild man created by the gods to stop him oppressing the people of Uruk. In the second half of the epic, Gilgamesh's distress at Enkidu's death causes him to undertake a long and perilous journey to discover the secret of eternal life. History[edit] Versions of the epic[edit] Standard Akkadian version[edit] Content of the standard version tablets[edit]

Chinese mythology Chinese mythology refers to those myths found in the historical geographic area of China: these include myths in Chinese and other languages, as transmitted by Han Chinese as well as other ethnic groups (of which fifty-six are officially recognized by the current administration of China).[1] Chinese mythology includes creation myths and legends, such as myths concerning the founding of Chinese culture and the Chinese state. As in many cultures' mythologies, Chinese mythology has in the past been believed to be, at least in part, a factual recording of history. Thus, in the study of historical Chinese culture, many of the stories that have been told regarding characters and events which have been written or told of the distant past have a double tradition: one which presents a more historicized and one which presents a more mythological version.[2] Historians have written evidence of Chinese mythological symbolism from the 12th century BC in the Oracle bone script. Major concepts[edit]

Mallie and the Trow - Scotland's Stories In the Shetland Isles the trows are strange and magical creatures. They’re capable of great kindness and also great mischief. Mallie, a young mother, had four wee bairns to feed and a husband lost at sea. She had reached rock bottom and needed help but no-one would help her. Then, as the night drew in, there was a knock at the door. It was a little man dressed in grey with a little grey hat on top of his head. What do you do when a weird small trow appears on your doorstep in the middle of the night? Would you invite him in and share what little you have? Or would you slam the door shut and hide under your bed? Thanks to Mallie’s kind heart and good nature her fortunes were about to change. Click on the image to view a larger version. Celtic mythology Overview[edit] Though the Celtic world at its apex covered much of western and central Europe, it was not politically unified nor was there any substantial central source of cultural influence or homogeneity; as a result, there was a great deal of variation in local practices of Celtic religion (although certain motifs, for example the god Lugh, appear to have diffused throughout the Celtic world). Inscriptions of more than three hundred deities, often equated with their Roman counterparts, have survived, but of these most appear to have been genii locorum, local or tribal gods, and few were widely worshipped. However, from what has survived of Celtic mythology, it is possible to discern commonalities which hint at a more unified pantheon than is often given credit. Celtic mythology is found in a number of distinct, if related, subgroups, largely corresponding to the branches of the Celtic languages: Historical sources[edit] Irish mythology[edit] Cuchulainn carries Ferdiad across the river

Irish Fairy Tales: Mongan's Frenzy Sacred Texts Sagas and Legends Celtic Index Previous The abbot of the Monastery of Moville sent word to the story-tellers of Ireland that when they were in his neighbourhood they should call at the monastery, for he wished to collect and write down the stories which were in danger of being forgotten. "These things also must he told," said he. In particular he wished to gather tales which told of the deeds that had been done before the Gospel came to Ireland. "For," said he, "there are very good tales among those ones, and it would be a pity if the people who come after us should be ignorant of what happened long ago, and of the deeds of their fathers." So, whenever a story-teller chanced in that neighbourhood he was directed to the monastery, and there he received a welcome and his fill of all that is good for man. The abbot's manuscript boxes began to fill up, and he used to regard that growing store with pride and joy. The abbot's eyes glistened when he heard that. Said Cairide': "Amen!"

Fengshen Yanyi Fengshen Yanyi, also known as Fengshen Bang, or translated as The Investiture of the Gods, is a 16th-century Chinese novel and one of the major vernacular Chinese works in the shenmo genre written during the Ming Dynasty (1368–1644).[1] Consisting of 100 chapters, it was first published in book form around the 1550s.[1] Plot[edit] The novel is a romanticised retelling of the overthrow of King Zhou, the last ruler of the Shang Dynasty, by King Wu, who would establish the Zhou Dynasty in place of Shang. The story integrates oral and written tales of many Chinese mythological figures who are involved in the struggle as well. These figures include human heroes, immortals and various spirits (usually represented in avatar form like vixens, and pheasants, and sometimes inanimate objects such as a pipa). Some well-known anecdotes[edit] Nüwa and King Zhou[edit] King Zhou visits the temple of the ancient Chinese goddess Nüwa to worship her. Daji and Boyi Kao[edit] Ji Chang and Jiang Ziya[edit]

Good Structures for Balsa Wood Towers Balsa wood is only the third lightest wood in the world, but it is strong. Engineering students build balsa wood towers (or bass wood towers) to learn how to build strong structures. It is an excellent exercise, and students learn a lot doing it. Four-Legged Towers Balsa wood towers with four legs are easier to build, but they are not usually as structurally sound as their three-legged counterparts. Three-Legged Towers Three-legged towers are harder to build because the angles are more difficult, but they tend to be stronger towers. Wood Grain The wood grain dictates the flexibility and rigidness of the wood as much as the density of the wood. The Design First draw the design on paper before you begin building a tower. More slideshows Ancient Egyptian religion Egyptian mythology is the collection of myths from ancient Egypt, which describe the actions of the Egyptian gods as a means of understanding the world. The beliefs that these myths express are an important part of ancient Egyptian religion. Myths appear frequently in Egyptian writings and art, particularly in short stories and in religious material such as hymns, ritual texts, funerary texts, and temple decoration. These sources rarely contain a complete account of a myth and often describe only brief fragments. The details of these sacred events differ greatly from one text to another and often seem contradictory. Egyptian myths are primarily metaphorical, translating the essence and behavior of deities into terms that humans can understand. Mythology profoundly influenced Egyptian culture. Origins[edit] The development of Egyptian myth is difficult to trace. Another possible source for mythology is ritual. Definition and scope[edit] Content and meaning[edit] Sources[edit]

Gilgamesh Gilgamesh (/ˈɡɪl.ɡə.mɛʃ/; Akkadian cuneiform: 𒄑𒂆𒈦 [𒄑𒂆𒈦], Gilgameš, often given the epithet of the King, also known as Bilgamesh in the Sumerian texts)[1] was the fifth king of Uruk, modern day Iraq (Early Dynastic II, first dynasty of Uruk), placing his reign ca. 2500 BC. According to the Sumerian King List he reigned for 126 years. In the Tummal Inscription,[2] Gilgamesh, and his son Urlugal, rebuilt the sanctuary of the goddess Ninlil, in Tummal, a sacred quarter in her city of Nippur. Cuneiform references[edit] In the Epic of Gilgamesh, Gilgamesh is credited with the building of the legendary walls of Uruk. Fragments of an epic text found in Me-Turan (modern Tell Haddad) relate that at the end of his life Gilgamesh was buried under the river bed. Later (non-cuneiform) references[edit] In the Qumran scroll known as Book of Giants (ca. 100 BC) the names of Gilgamesh and Humbaba appear as two of the antediluvian giants (in consonantal form), rendered as glgmš and ḩwbbyš.