The Annunaki and the Myth of a 12th Planet 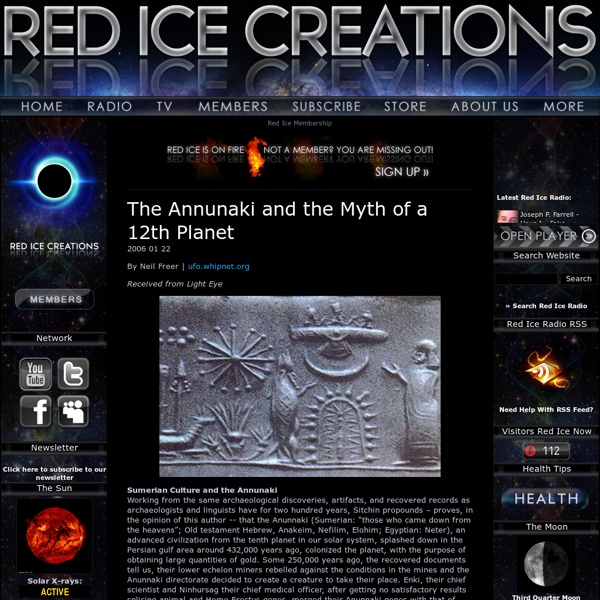 By Neil Freer | ufo.whipnet.org Received from Light Eye Sumerian Culture and the Annunaki Working from the same archaeological discoveries, artifacts, and recovered records as archaeologists and linguists have for two hundred years, Sitchin propounds – proves, in the opinion of this author -- that the Anunnaki (Sumerian: “those who came down from the heavens”; Old testament Hebrew, Anakeim, Nefilim, Elohim; Egyptian: Neter), an advanced civilization from the tenth planet in our solar system, splashed down in the Persian gulf area around 432,000 years ago, colonized the planet, with the purpose of obtaining large quantities of gold. Eventually, we became so numerous that some of us were expelled from the Anunnaki city centers, gradually spreading over the planet. Around 6000 years ago, they, probably realizing that they were going to phase off the planet, began, gradually, to bring humans to independence. What evidence supports the Sitchin thesis? Tombaugh discovered Pluto in 1930. Related:  Anunnaki

This Is Just Amazing! The Whole Anunnaki Story In Very Well Made Cartoons! BESbswyBESbswyBESbswy x Researchers May Have Found The Home Planet Of The Anunnaki Besides the general scientific community, fringe groups which include believers of the Annunaki and the lost planet of Nibiru have displayed their interest and joined in the discussion that the world might be enlightened by their views and knowledge. Is Planet X The Annunaki Planet Of Nibiru? Janet Sitchin, whose uncle Zecharia Sitchin was famous for the theory of the ancient planet Nibiru and the link to the Annunaki, stated: “It was very exciting to see scientists finding another planet in our solar system or evidence of it, ” She further lambasted sceptics when interviewed by FoxNews. Com: "It’s exciting because sceptics thought that such a large planet could not go unnoticed, these are mostly people who are not astronomers and do not know how big space really is.” Nibiru And The Annunaki The late Zecharia Sitchin, who passed from this world in 2010 at the age 90, once wrote a book about Nibiru titled "The 12th Planet" back in 1976. NASA On Planet X Image: Deviant Art

The Forbidden timeline of Earth's History according to the Anunnaki Based on numerous archaeological discoveries: artifacts, records and monuments found in the past by experts, it is believed that the Anunnaki (Sumerian: “those who came down from the heavens), an extremely advanced civilization from an elusive planet in our solar system, came to Earth, landing in the Persian Gulf some 432,000 years ago. In the last couple of decades, numerous controversial discoveries have been made which challenge mainstream researchers and their views on history and human evolution. Every time we write about the Ancient Anunnaki; we come across much discomfort from various sides of readers. While there are those who firmly believe the existence of the Anunnaki, and their arrival to Earth can explain many accounts which mainstream scholars cannot, there are those who believe that the ancient Anunnaki never existed, and that extremely advanced civilizations never existed on Earth. 430,000 Earth’s climate mellows. 300,000 The Anunnaki toiling in the gold mines mutiny.

Leaked video footage of a 12,000-year-old Anunnaki? – FerocesMente The recently uploaded video allegedly shows “footage of a 12,000-year-old Anunnaki God…” The tomb of the ‘Anunnaki’ is said to have been discovered by chance in 2008. If anyone has more info about it please let us know. Before everyone goes crazy about the title and the video, please watch it and let us know what you think. If anyone has more information about the video, please let us know. The video uploaded to YouTube by Temple Of Mystery states that the video footage is an actual (real) leaked video of a 12,000-year-old Anunnaki. The Ancient Anunnaki are probably the number one topic when it comes to the Ancient Alien theory and many people around the world remain skeptical when talking about the Anunnaki and their potential connection to the origins of mankind. According to statements on the video, the footage „…Is real and they discovered it in Iran in 2008, but they move it to Israel“. Users have rushed to YouTube to discuss the enigmatic video. One user wrote on YouTube:

Scientists have unlocked the power of gold atoms but is this technology new or ancient? For those who follow the stories of the ancient Sumerian tablets first discovered in the 1800s, you know that gold is central to the story. The Anunnaki, extraterrestrials from another planet, mined for precious gold in southern Africa when they arrived on Earth. The element has unique qualities that make it invaluable for many reasons; from jewelry to electrical components, to insulation used in space travel. Now, researchers from the University of Leeds in the U.K. have created the world’s “thinnest gold” only two atoms in thickness. “The previous reported thinnest unsupported 2D gold nanosheets have a minimum thickness of 3.6 nanometers,” Sunjie Ye, lead author of the study, told Newsweek. Newsweek noted that researcher Stephen Evan from Leeds supervised the study. “Gold is a highly effective catalyst. According to the article, the flexible 2D gold might be used to “develop artificial enzymes” for such technologies as water filtration and improved medical diagnostic tests.

Do Ancient Sumerian Scribes Really Describe Extraterrestrial Contact? Ancient history is full of documented oddities, ones that unfortunately we continue to ignore, but we’re getting better and the collective human mind is opening up to new explanations for the nature of reality, and a host of other topics, like human history, for example. A lot of ‘lore’ from our ancient world seems to be in the process of being re-discovered, a great example would be the correlations between ancient eastern spiritual beliefs and quantum physics, with its strong correlation and dependence on consciousness. Another example could be ancient health practices, commonly referred to today as naturopathic medicine. The example in this article deals with ancient lore of beings from other worlds, and it’s even more interesting because of the modern day UFO disclosure we’re seeing and the evidence suggesting that some of them could be extraterrestrial is quite fascinating, at least for those who’ve taken the time to look. The Tenth Planet “If the new evidence from the U.S.