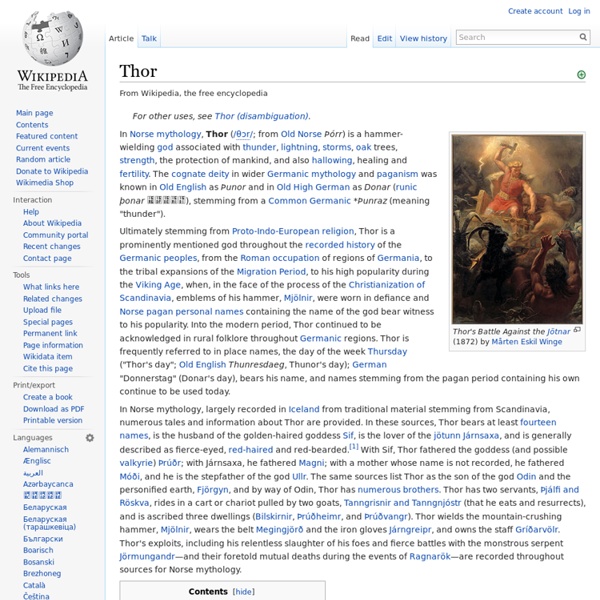 In Norse mythology, Thor (/θɔr/; from Old Norse Þórr) is a hammer-wielding god associated with thunder, lightning, storms, oak trees, strength, the protection of mankind, and also hallowing, healing and fertility. The cognate deity in wider Germanic mythology and paganism was known in Old English as Þunor and in Old High German as Donar (runic þonar ᚦᛟᚾᚨᚱ), stemming from a Common Germanic *Þunraz (meaning "thunder"). Ultimately stemming from Proto-Indo-European religion, Thor is a prominently mentioned god throughout the recorded history of the Germanic peoples, from the Roman occupation of regions of Germania, to the tribal expansions of the Migration Period, to his high popularity during the Viking Age, when, in the face of the process of the Christianization of Scandinavia, emblems of his hammer, Mjölnir, were worn in defiance and Norse pagan personal names containing the name of the god bear witness to his popularity. Name[edit] Attestations[edit] Roman era[edit] Post-Roman Era[edit]

Týr Týr (/ˈtɪər/;[1] Old Norse: Týr [tyːr]) is a god associated with law and heroic glory in Norse mythology, portrayed as one-handed. Corresponding names in other Germanic languages are Gothic Teiws, Old English Tīw and Old High German Ziu and Cyo, all from Proto-Germanic *Tīwaz. The Latinised name is Tius or Tio.[2] Name[edit] The earliest attestation for Týr's continental counterpart occurs in Gothic tyz "the t-rune" (𐍄) in the 9th-century Codex Vindobonensis 795.[4] The name is later attested in Old High German as Cyo in the A Wessobrunn prayer ms. of 814. Týr in origin was a generic noun meaning "god", e.g. West Germanic Ziu/Tiw/Tiwaz[edit] A gloss to the Wessobrunn prayer names the Alamanni Cyowari (worshipers of Cyo) and their capital Augsburg Ciesburc.[5] Tacitus also named the German "Mars" as the primary deity, along with the German "Mercury" (believed to be Odin), Hercules (believed to be Thor) and "Isis". North Germanic Tyr[edit] Tyr appears in the Eddic Poem Hymiskviða.

Yulin Naval Base Yulin Naval Base (榆林海军基地) is a naval base for nuclear submarines along the southern coast of Hainan Island, People's Republic of China.[1][2] This underground base has recently been reported by several agencies, especially Indian ones. The images collected by the Federation of American Scientists (FAS) in February 2008 shows that China constructed a large scale underground base for its naval forces.[3] Description[edit] The caverns are capable of hiding up to 20 nuclear submarines from spy satellites. Location[edit] The submarine base is located at the point in Chinese territory that is closest to the continental shelf. The submarine base is not in a remote location. Strategic importance[edit] More than half of the world's annual merchant fleet tonnage passes through the Strait of Malacca, Sunda Strait, and Lombok Strait, with the majority continuing on into the South China Sea. See also[edit] INS Varsha, an Indian nuclear submarine base References[edit] Coordinates:

Taranis Gundestrup cauldron, created between 200 BC and 300 AD, is thought to have a depiction of Taranis on the inner wall of cauldron on tile C The name as recorded by Lucan is unattested epigraphically, but variants of the name include the forms Tanarus, Taranucno-, Taranuo-, and Taraino-.[3][4] The name is continued in Irish as Tuireann, and is likely connected with those of Germanic (Norse Thor, Anglo-Saxon Þunor, German Donar) and Sami (Horagalles) gods of thunder. Taranis is likely associated with the Gallic Ambisagrus (likely from Proto-Celtic *ambi-sagros = "about-strength"), and in the interpretatio romana with Jupiter. Etymology[edit] Taranis, as a personification of thunder, is often identified with similar deities found in other Indo-European pantheons. Association with the wheel[edit] Votive wheels called Rouelles, thought to correspond to the cult of Taranis. See also[edit] [edit] Jump up ^ M. References[edit] External links[edit]

Kaʻahumanu Early life[edit] Kaahumanu was born in a cave called Puu Kauiki in Hāna on the Hawaiian Island of Maui. Her birth is 17 March 1768. Her siblings include Governor John Adamss Kuakini of Hawaii island, Queen Kalākua Kaheiheimālie,and Governor George Keʻeaumoku II of Maui.[2] Her father became an advisor and friend to Kamehameha I, eventually becoming royal governor of Maui. Queen Regent[edit] Kaʻahumanu was also the most powerful wife. In some ways Kaʻahumanu was ahead of her time and championed the rights of native Hawaiian women, although this was to her own advantage. Kaumualii of Kauai[edit] The island of Kauaʻi and its subject island Niʻihau had never been forcibly conquered by Kamehameha. Embracing Christianity[edit] In April 1819, Kaʻahumanu publicly acknowledged her embrace of Protestant Christianity and encouraged her subjects to be baptized into the faith. Establishing American relations[edit] Notes[edit] WikiMiniAtlas Ancestry[edit] References[edit] Daws, A. External links[edit]

Zeus Name The Chariot of Zeus, from an 1879 Stories from the Greek Tragedians by Alfred Church. The god's name in the nominative is Ζεύς Zeús /zdeús/. It is inflected as follows: vocative: Ζεῦ / Zeû; accusative: Δία / Día; genitive: Διός / Diós; dative: Διί / Dií. Diogenes Laertius quotes Pherecydes of Syros as spelling the name, Ζάς.[10] The earliest attested forms of the name are the Mycenaean Greek 𐀇𐀸, di-we and 𐀇𐀺, di-wo, written in the Linear B syllabic script.[14] Zeus in myth Zeus, at the Getty Villa, A.D. 1 - 100 by unknown. Birth When Zeus was about to be born, Rhea sought Gaia to devise a plan to save him, so that Cronus would get his retribution for his acts against Uranus and his own children. Infancy Rhea hid Zeus in a cave on Mount Ida in Crete. King of the gods Zeus and Hera Consorts and children 2The Charites/Graces were usually considered the daughters of Zeus and Eurynome but they were also said to be daughters of Dionysus and Aphrodite or of Helios and the naiad Aegle.

Victoria Kamāmalu Victoria Kamāmalu Kaʻahumanu IV (1838–1866), was Kuhina Nui of Hawaii and its crown princess. Although not agreed upon by most, she was arguably the first female to become the monarch of Hawaii, reigning for a day in November 30, 1863. Named Wikolia Kamehamalu Keawenui Kaʻahumanu-a-Kekūanaōʻa[3] and also named Kalehelani Kiheahealani,[3] she was mainly referred to as Victoria Kamāmalu or Kaʻahumanu IV,[4] when addressing her as the Kuhina Nui. Family[edit] Born at the Honolulu Fort, on November 1, 1838, she was the only daughter of Elizabeth Kīnaʻu, Kaʻahumanu II and her third husband Mataio Kekūanāoʻa. Through her mother she was granddaughter of King Kamehameha I, founder of the kingdom. Early life[edit] Victoria Kamāmalu and her father She was educated at Royal School along with all her cousins and brothers. Her father Kekūanāoʻa raised her. She was two months younger than the future queen Liliʻuokalani. Kuhina Nui[edit] Personal Flag of Princess Victoria Kamāmalu as Kuhina Nui

Sól (sun) Sól (Old Norse "Sun")[1] or Sunna (Old High German, and existing as an Old Norse and Icelandic synonym: see Wiktionary sunna, "Sun") is the Sun personified in Germanic mythology. One of the two Old High German Merseburg Incantations, written in the 9th or 10th century CE, attests that Sunna is the sister of Sinthgunt. In Norse mythology, Sól is attested in the Poetic Edda, compiled in the 13th century from earlier traditional sources, and the Prose Edda, written in the 13th century by Snorri Sturluson. In both the Poetic Edda and the Prose Edda she is described as the sister of the personified moon, Máni, is the daughter of Mundilfari, is at times referred to as Álfröðull, and is foretold to be killed by a monstrous wolf during the events of Ragnarök, though beforehand she will have given birth to a daughter who continues her mother's course through the heavens. In the Prose Edda, she is additionally described as the wife of Glenr. "Wodan Heals Balder's Horse" (1905) by Emil Doepler.

Jupiter (mythology) The consuls swore their oath of office in Jupiter's name, and honoured him on the annual feriae of the Capitol in September. To thank him for his help (and to secure his continued support), they offered him a white ox (bos mas) with gilded horns.[10] A similar offering was made by triumphal generals, who surrendered the tokens of their victory at the feet of Jupiter's statue in the Capitol. Some scholars have viewed the triumphator as embodying (or impersonating) Jupiter in the triumphal procession.[11] During the Conflict of the Orders, Rome's plebeians demanded the right to hold political and religious office. The augures publici, augurs were a college of sacerdotes who were in charge of all inaugurations and of the performing of ceremonies known as auguria. The role of Jupiter in the conflict of the orders is a reflection of the religiosity of the Romans. The first secession was caused by the excessive burden of debts that weighed on the plebs.