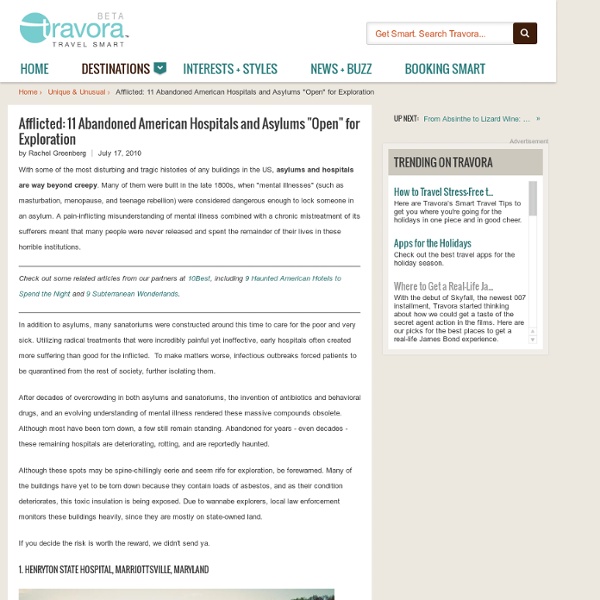 With some of the most disturbing and tragic histories of any buildings in the US, asylums and hospitals are way beyond creepy . Many of them were built in the late 1800s, when “mental illnesses” (such as masturbation, menopause, and teenage rebellion) were considered dangerous enough to lock someone in an asylum. A pain-inflicting misunderstanding of mental illness combined with a chronic mistreatment of its sufferers meant that many people were never released and spent the remainder of their lives in these horrible institutions. In addition to asylums, many sanatoriums were constructed around this time to care for the poor and very sick. Utilizing radical treatments that were incredibly painful yet ineffective, early hospitals often created more suffering than good for the inflicted. To make matters worse, infectious outbreaks forced patients to be quarantined from the rest of society, further isolating them. If you decide the risk is worth the reward, we didn’t send ya. 1. 2. 3. 4. 5.

Chris Jordan - In Katrina's Wake This series, photographed in New Orleans in November and December of 2005, portrays the cost of Hurricane Katrina on a personal scale. Although the subjects are quite different from those in my earlier Intolerable Beauty series, this project is motivated by the same concerns about our runaway consumerism. There is evidence to suggest that Katrina was not an entirely natural event like an earthquake or tsunami. Detroit in Ruins Detroit in ruins – The Decline of a major American City “Detroit in ruins“, a series of pictures taken by photographers Yves Marchand and Romain Meffre on the decline of a great American city. Breathtaking images that reflect the sad fate of some major U.S. cities… via / via / photos by Yves Marchand, Romain Meffre

The house that time forgot: Hundreds of antiquities discovered in country mansion where little has changed in 100 years Auctioneers discovered a treasure trove of antiques inside The HermitageThey discovered wine from 1914 and Champagne from 1919Also discovered family photographs spanning almost 100 yearsContents of the house will be auctioned in 1,500 lots By Anthony Bond Published: 16:00 GMT, 5 June 2013 | Updated: 21:41 GMT, 5 June 2013 Thousands of people have driven past this mansion over the years and looked at its impressive exterior. But few could have imagined the secrets which the 18th Century building holds inside.

How to take a broke-ass road trip There’s a saying that goes, ‘The coldest winter I ever spent was a summer in San Francisco’. It’s credited to Mark Twain, but that’s a lie; nobody really knows who said it. I wish I had. You know what else I wish I had? A friggin’ car! Don’t get me wrong, San Francisco is one of the true loves of my life, but I could really use some summer sunshine. The world without us: Chernobyl Nature has made a determined comeback In the 20 years since Chernobyl's reactor No. 4 turned a bustling Soviet city into a ghost town. The people are gone, and in their place are now thriving populations of deer, elk, wild boar, wolves, and even lynx. Trees are pushing up through Lenin Avenue and moss is clinging to the broken sidewalks and abandoned buildings throughout the 19-miles that make up the Exclusion Zone. Tim Mousseau of the University of South Carolina has been studying the effects of radiation on Chernobyl's wildlife, and told National Geographic that despite the higher levels of genetic abnormalities, "one of the great ironies of this particular tragedy is that many animals are doing considerably better than when the humans were there."

Abandoned Places: 10 Creepy, Beautiful Modern Ruins Abandoned Places: 10 Creepy, Beautiful Modern Ruins Abandoned Places | We humans are explorers by nature. The quest for discovery, both old and new, is part of what separates us from rest of the animal kingdom. Since the world we live in has been largely mapped and plotted, we urban adventurers turn our sights toward the relics of old and the ruins of the recent past. Skinny dipping hot spots Some things just have to be done. Like when the moon is full, the air warm and mother nature has swathed herself in the most exquisite of sparkly, velvet gowns - to find the closest body of natural water, expose your skin to the exotic night and take a dip. A skinny dip.

The Ruins of Detroit Posted Feb 07, 2011 Share This Gallery inShare850 Up and down Detroit’s streets, buildings stand abandoned and in ruin. Lost Richmond – Exploring Elko Tract, Richmond’s “Lost City” « You Guys Should Know Richmond is a town of history. Everything is historic… the streets, the buildings, the canals, the houses.. its almost overload to the point where there’s so much history no one really pays attention to it on a daily basis because its just there. About a decade ago, I began hearing stories out of Richmond East-enders about Richmond’s Lost City. Although no two stories were alike, the basic gist of it was that during World War II, Richmond created a fake city a few miles east of the airport and during potential air raids, they would blackout the actual city and airport and turn the lights on at the decoy in hopes that from the air, the bombers would unknowingly bomb the decoy and Richmond would be saved.

Battleship Island - Japan's rotting metropolis These days the only things that land on Hashima Island are the shits of passing seagulls. An hour or so’s sail from the port of Nagasaki, the abandoned island silently crumbles. A former coal mining facility owned by Mitsubishi Motors, it was once the most densely populated place on earth, packing over 13,000 people into each square kilometre of its residential high-risers. It operated from 1887 until 1974, after which the coal industry fell into decline and the mines were shut for good.

A dream treehouse · Sheepy Me I've always wanted a treehouse when I was a child but living in a city made it a little difficult. Instead, we would built forts, tents or just crawl under the bed to play. It's weird right now but back then we really loved having those hideouts where nobody could find us. We could stay there for as long as we wanted. Telling horror stories and feeling like these were the safest places to be.

The 33 Most Beautiful Abandoned Places In The World Many people doesn’t know, and didn’t even heard about these famous abandoned places. Many of these places are really something amazing, but they are also really sad when you take a closer look at them. On the folowing list, you can see abandoned planes, abandoned ships, as well as the abandoned houses, and so many other things, that are really amazing and magnificent. So, check out these amazing abandoned places photos. 1. WAG: Elko Tract: Exploring the Lost City There's three of us in the Toyota, and when we turn onto the back road, we cut the lights off and drift onto the shoulder. Outside, the woods are dark and, in the moonless stillness, they seem to form a single, impenetrable wall. The dirt road ten feet from the car is almost invisible, except for the silver ribbons of the telephone and electrical wires that run down its center.