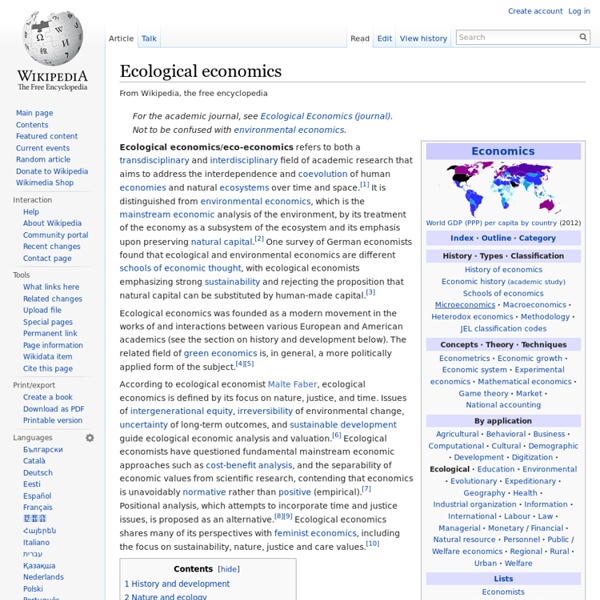 Ecological economics/eco-economics refers to both a transdisciplinary and interdisciplinary field of academic research that aims to address the interdependence and coevolution of human economies and natural ecosystems over time and space.[1] It is distinguished from environmental economics, which is the mainstream economic analysis of the environment, by its treatment of the economy as a subsystem of the ecosystem and its emphasis upon preserving natural capital.[2] One survey of German economists found that ecological and environmental economics are different schools of economic thought, with ecological economists emphasizing strong sustainability and rejecting the proposition that natural capital can be substituted by human-made capital.[3] Ecological economics was founded as a modern movement in the works of and interactions between various European and American academics (see the section on history and development below). History and development[edit] Nature and ecology[edit]

Civics Government[edit] On smaller scales, modern human development theory attempts to unify ethics and small-scale politics with the urban and rural economies of sustainable development. Notable theorists including Jane Jacobs and Carol Moore argue that political secession of either cities or distinct bio regions and cultures is an essential pre-requisite to applying any widely shared ethics, as the ethical views of urban and rural people, different cultures or those engaged in different types of agriculture, are irreconcilably different. This extreme advocacy of decentralization is hardly uncommon, and leads to the minimal theory of civics – anarchism. Civics refers not to the ethical or moral or political basis by which a ruler acquires power, but only to the processes and procedures they follow in actually exercising it. Recently, the concept of global civics has also been suggested as a way of applying civics in the highly interdependent and globalized world of the 21st century.

Circular economy A major argument in favour of the circular economy approach is that achieving a sustainable world does not require changes in the quality of life of consumers, nor does it require loss of revenues or extra costs for manufacturers and other economic agents. The argument is that circular business models can be as profitable as linear models and allow consumers to keep enjoying similar products and services.[citation needed] To achieve models that are economically and environmentally sustainable, the circular economy focuses on areas such as design thinking, systems thinking, product life extension, and recycling.[3][4] Origins[edit] As early as 1966 Kenneth Boulding already raised awareness of an "open economy" with unlimited input resources and output sinks in contrast with a "closed economy", in which resources and sinks are tied and remain as long as possible a part of the economy. Other early schools of thought include Professor Walter R. Moving away from the linear model[edit]

Progressive Era Presidents Theodore Roosevelt, 1901-09 (left), William Howard Taft, 1909-13 (center), and Woodrow Wilson, 1913-21 (right) are often referred to as the "Progressive Presidents"; their administrations saw intense social and political change in American society. Initially the movement operated chiefly at local levels; later it expanded to state and national levels. Progressives drew support from the middle class, and supporters included many lawyers, teachers, physicians, ministers and business people.[7] The Progressives strongly supported scientific methods as applied to economics, government, industry, finance, medicine, schooling, theology, education, and even the family. Political reform[edit] "The Awakening" Suffragists were successful in the West; their torch awakens the women struggling in the East and South in this cartoon by Hy Mayer in Puck Feb. 20, 1915 Exposing corruption[edit] Modernization[edit] The Progressives were avid modernizers. Women[edit] Woman suffrage[edit]

Giordano Bruno Giordano Bruno (Latin: Iordanus Brunus Nolanus; Italian: [dʒorˈdano ˈbruno]; 1548 – February 17, 1600), born Filippo Bruno, was an Italian Dominican friar, philosopher, mathematician, poet, and astrologer.[3] He is celebrated for his cosmological theories, which went even further than the then-novel Copernican model: while supporting heliocentrism, Bruno also correctly proposed that the Sun was just another star moving in space, and claimed as well that the universe contained an infinite number of inhabited worlds, identified as planets orbiting other stars. He was noteworthy in the 16th Century for promoting a pantheistic conception of God, to the dismay of the Catholic Church.[4] In addition to his cosmological writings, Bruno also wrote extensively on the art of memory, a loosely organized group of mnemonic techniques and principles. Life[edit] Early years, 1548–1576[edit] First years of wandering, 1576–1583[edit] In 1579 he arrived in Geneva. England, 1583–1585[edit]

Demographics of atheism Atheists comprised an estimated 2.01%, and non-religious a further 9.66% of the world population, according to The World Factbook in 2010.[1] In East Asia, atheists and the irreligious are the majority. Outside of East Asia and some European countries atheist or non-believer percentages are typically in the single digits. According to one study, the number of atheists is on the rise across the world, with religiosity generally declining.[2] However, another global study has concluded that atheism is on a global decline due to continuing steady increases in religiosity in China, which harbors the majority of atheists and non-religious people, and Eastern Europe which has had significant changes in religiosity after the fall of communism.[3] Scientific assessment of the extent of "atheism" in various populations is beset with a number of problems. Studies and statistics[edit] The demographics of atheism are substantially difficult to quantify. Statistical problems[edit] Prejudice[edit]

Criticism of atheism Criticism of atheism is criticism of the concepts, validity, or impact of atheism, including associated political and social implications. Criticisms include arguments based on theistic positions, arguments pertaining to morality or what are thought to be the effects of atheism on the individual, or of the assumptions, scientific or otherwise, that underpin atheism. Criticism of atheism is complicated by the fact that there exist multiple definitions and concepts of atheism (and little consensus among atheists), including practical atheism, theoretical atheism, negative and positive atheism, implicit and explicit atheism, and strong and weak atheism, with critics not always specifying the subset of atheism being criticized. Various agnostics and theists have criticised atheism for being an unscientific, or overly dogmatic and definitive position to hold, some with the argument that 'absence of evidence cannot be equated with evidence for absence'. Atheism and the individual[edit]