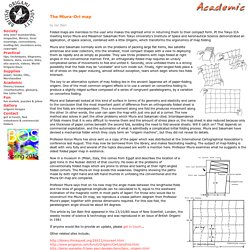 Pt the Tokyo ICA meeting Koryo Miura and Masamori Sakamaki from Tokyo University's Institute of Space and Aeronautical Science demonstrated an application, of space science, combined with a little Origami, which transforms the ergonomics of map folding. Miura and Sakamaki normally work on the problems of packing large flat items, like satellite antennae and solar collectors, into the smallest, most compact shapes with a view to deploying them as rapidly and as simply as possible. They saw three problems with naps folded at right angles in the conventional manner. The key to an alternative system of may folding lies in the ancient Japanese art of paper-folding, origami. Professor Koryo Miura has since sent us a copy of the paper which was distributed at the International Cartographical Association's conference last August.

Other related sites include; The Way of Origami: The Haga Theorems (Part I) Months ago, when I get envolved with Robert Lang's Miura Ken Rose I got the courage of writing him an email, to show him my humble solution of its CP (now its diagram was published on Origami USA 2007 Convention Book and 12th JOAS Convention) and his answer filled me with happiness, since he not only authorized me to put my doc online, but also gave me several suggestions and good advices. 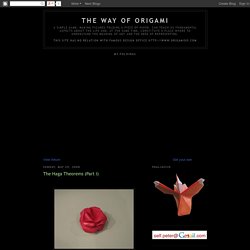 One of them was a "Junior" version of the Miura Ken, described by him as the construction of a grid with horizontal divisions of 12/54, 25/54, and 39/54, each one of them divided also in half, along with vertical divisions of 1/9ths. I've been faced then with the problem of generate these strange and kind of bizarre proportions of 1/54ths. But obviously is not like we need to fold halfs until reach 1/54, if we consider that 6/54 are 1/9 and that 2 times that makes the first of the suggested divisions . Then, how to create a 1/9th fold?

If the triangles are proportionals, Untitled. Origami expert, NASA researchers fold solar arrays for space - CNET. NASA has joined forces with an origami expert to meld art and technology in the creation of foldable solar structures that could one day go into space. 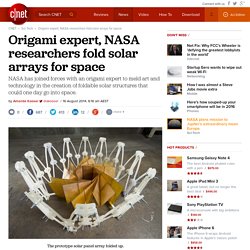 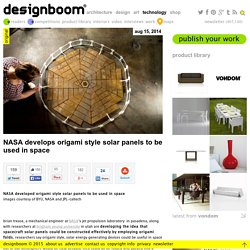 Untitled. Mathematics of paper folding. The art of origami or paper folding has received a considerable amount of mathematical study. 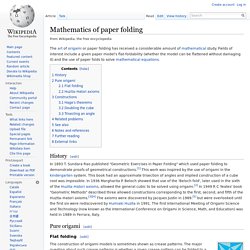 Fields of interest include a given paper model's flat-foldability (whether the model can be flattened without damaging it) and the use of paper folds to solve mathematical equations. History[edit] Origami: mathematics in creasing. Origami is the ancient Japanese art of paper folding. 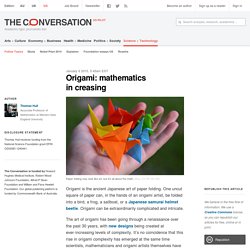 One uncut square of paper can, in the hands of an origami artist, be folded into a bird, a frog, a sailboat, or a Japanese samurai helmet beetle. Pasta by Design: A mathematical look at pasta. If your friend turned to you and said "let's do pasta" you might respond by telling them to boil the water or by asking what sauce to prepare. 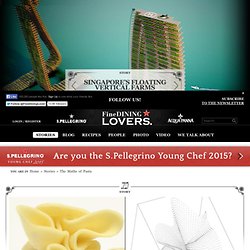 But when George L. Legendre's friend said "lets do pasta" late one evening - the phrase took on a whole new meaning. George is an architect and what his Italian friend Marco was offering was a new topic for him to analyze, a new angle for him to apply his mathematical knowledge, a new way to focus on something less conventional. Not buildings, structural analysis or the perfect maths required to build an arch - but plain and simple pasta. For the next two years that's exactly what George did - first he collected as many commercially available pasta shapes as possible, 92. Pasta by Design: A mathematical look at pasta. And now, the mathematics of pasta shapes. Have you ever wanted to know the mathematical formula for fusilli, or wondered about the geometric calculation for quadrefiore? 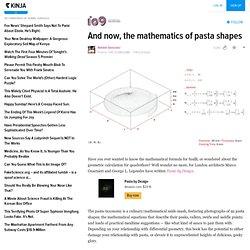 Pasta Geometries - Interactive Feature. Pasta Inspires Scientists to Use Their Noodle. Sander Huisman did, too — and then he wondered about what mathematical equation would describe the undulating shapes he was eating. 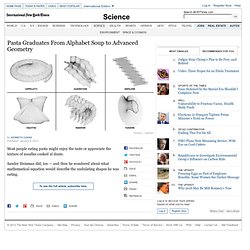 Mr. Huisman, a graduate student in physics at the University of Twente in the Netherlands, spends much of his days using Mathematica, a piece of software that solves complicated math problems and generates pretty pictures of the solutions. “I play around with Mathematica a lot,” he said. “We were eating pasta, and I was wondering how easy these shapes would be recreated” with the software. So that evening after dinner, Mr. Mathematics and art. Mathematics in art: Albrecht Dürer's copper plate engraving Melencolia I, 1514 Mathematics and art have a long historical relationship. 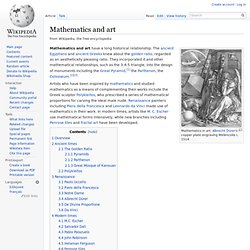 The ancient Egyptians and ancient Greeks knew about the golden ratio, regarded as an aesthetically pleasing ratio. They incorporated it and other mathematical relationships, such as the 3:4:5 triangle, into the design of monuments including the Great Pyramid,[1] the Parthenon, the Colosseum.[2][3] Mathematics and architecture. Mathematics and architecture are related. Architects intentionally or accidentally use mathematical proportions to shape buildings. In ancient Greece, the golden ratio may have been used to lay out some buildings. In Islamic architecture, geometrical shapes and tiling patterns are used. The pyramids of ancient Egypt have mathematical proportions including the golden ratio, for whatever reason. Hindu temples may have been laid out using the mathematics of astrology; they also have a fractal-like structure where parts resemble the whole.

In Renaissance architecture, symmetry and mathematical proportion were deliberately emphasized. In the twentieth century, styles such as modern architecture and Deconstructivism explored different geometries to achieve desired effects. Ancient times[edit] Maths IA – Maths Exploration Topics. Maths IA – Exploration Topics: 100+ ideas for investigations. (This list is for SL and HL students – if you are doing a Maths Studies IA then go to this page instead) The authors of the latest Pearson Mathematics SL and HL books – (which look excellent) have come up with 200 ideas for students doing their maths explorations. These topics touch a really large cross-section of mathematics. I’ve listed over 100 below. Explorations in Mathematics.

Exploration - High School Mathematics. Sheri.pdf. Origami Mathematics Page. These pages are an attempt to begin collecting information on the mathematics of paper folding.