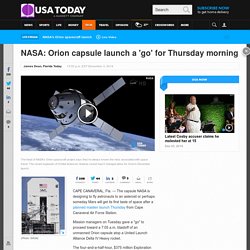 The recent explosion of Orbital Sciences' Antares rocket hasn't changed plans for Orion's December launch. CAPE CANAVERAL, Fla. — The capsule NASA is designing to fly astronauts to an asteroid or perhaps someday Mars will get its first taste of space after a planned maiden launch Thursday from Cape Canaveral Air Force Station. Mission managers on Tuesday gave a "go" to proceed toward a 7:05 a.m. blastoff of an unmanned Orion capsule atop a United Launch Alliance Delta IV Heavy rocket.

The four-and-a-half-hour, $375 million Exploration Flight Test-1 mission is a brief but high-profile early test of NASA's human exploration ambitions, at least seven years before astronauts are expected to climb in Orion. Search for extraterrestrial intelligence. NASA Might Give the Moon a Mini-Moon. Some Strange Things Are Happening To Astronauts Returning To Earth. NASA. NASA: Beautiful blood moon, when lunar eclipse comes Tuesday. On Tuesday, April 15, there will be a total lunar eclipse that will turn the moon a coppery red, NASA says. 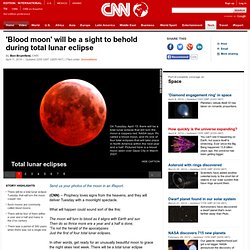 It's called a blood moon, and it's one of four total eclipses that will take place in North America within the next year and a half. Pictured here is a blood moon seen over Gaza City in March 2007. Moonhoax. By Donald E. 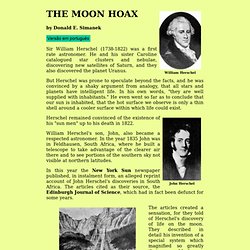 Simanek Sir William Herschel (1738-1822) was a first rate astronomer. He and his sister Caroline catalogued star clusters and nebulae, discovering new satellites of Saturn, and they also discovered the planet Uranus. But Herschel was prone to speculate beyond the facts, and he was convinced by a shaky argument from analogy, that all stars and planets have intelligent life. In his own words, "they are well supplied with inhabitants. " Herschel remained convinced of the existence of his "sun men" up to his death in 1822. 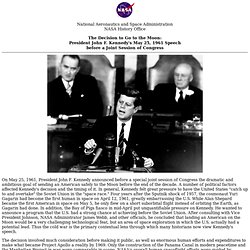 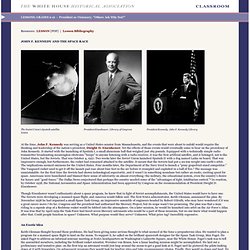 NASA President Eisenhower. Library of Congress President Kennedy. At the time, John F. Though Eisenhower wasn’t enthusiastic about a space program, he knew that in light of Soviet accomplishments, the United States would have to have one. An Exotic Idea Keith Glennan thought beyond these problems. Reality Check. Charles A. Lindbergh Quotes - 12 Science Quotes - Dictionary of Science Quotations and Scientist Quotes. Science Quotes by Charles A. 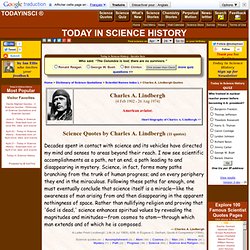 Lindbergh (11 quotes) Apollo 11 Moon Landing: How It Worked (Infographic) Launched from Earth on July 16, 1969, the three astronauts of Apollo 11 arrived in orbit of the moon on July 19. 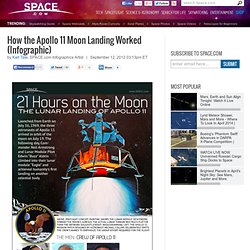 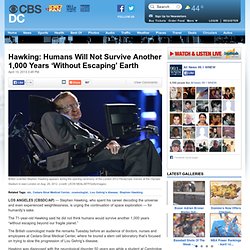 US won’t be returning to moon, NASA chief says. America won't be repeating that historic one small step anytime soon -- not according to NASA chief Charlie Bolden, anyway. 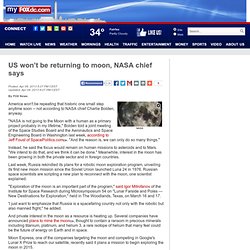 "NASA is not going to the Moon with a human as a primary project probably in my lifetime," Bolden told a joint meeting of the Space Studies Board and the Aeronautics and Space Engineering Board in Washington last week, according to Jeff Foust of SpacePolitics.com . "And the reason is, we can only do so many things. " Instead, he said the focus would remain on human missions to asteroids and to Mars. Hubble telescope takes stunning new nebula photo for 23rd birthday. This new Hubble image, captured and released to celebrate the telescopeâ ESA, and the Hubble Heritage Team (AURA/STScI),NASA NASA's Hubble Space Telescope has snapped a spectacular new image of an iconic nebula to celebrate its 23 years of peering deep into the heavens. 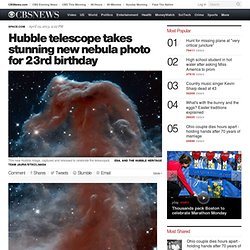 Human mission to Mars is no longer just a sci-fi dream. The new momentum, some space experts say, comes from the successful landing of the large rover Curiosity in a Martian crater last year, the growing eagerness of space entrepreneurs to mount and fund missions to Mars and encouraging new data about the radiation risks of such an expedition. NASA says it hopes to land astronauts on the planet within the next two decades, and the agency is developing a heavy-lift rocket and a new space capsule to achieve this goal. Gaia ° Luna. Space Exploration. Humans Visit Space. Silence in the sky—but why? Life on other planets could be far more widespread, study finds. (Phys.org) —Earth-sized planets can support life at least ten times further away from stars than previously thought, according to academics at the University of Aberdeen. A new paper published in Planetary and Space Science claims cold rocky planets previously considered uninhabitable may actually be able to support life beneath the surface.

The team, which included academics from the University of St Andrews, challenge the traditional 'habitable zone' – i.e. the area of space around a star, or sun, which can support life – by taking into consideration life living deep below the ground. The Voyager Mission and the Golden Record. Last September, the Times reported that Voyager 1, the hardy spacecraft launched in 1977, had exited the solar system and entered the interstellar void. Is an Adjacent Universe Causing the Dark Flow of Hundred of Millions of Stars at the Edge of the Observable Universe? Or, Might It Be Something Else. Theconversation. Top 5 Reasons We Might Live in a Multiverse. This Video Shows Every Star and Planet in Our Known Universe and It Will Blow Your Mind! The Size Of Space As Depicted Here Is Truly Mind-Blowing. Author: Jesse Herman of PowerfulPrimates The common understanding of physics, the universe, space travel and telescopes is not good.