Restoring the abandoned Maunsell Sea Forts. The Maunsell Forts are a series of armed towers in the Thames Estuary that operated as army and navy bases from 1942 to protect London from sea and air strikes. 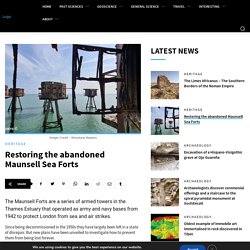 Since being decommissioned in the 1950s they have largely been left in a state of disrepair. But new plans have been unveiled to investigate how to prevent them from being lost forever. Leading structural engineering firm Structural Repairs has begun inspecting the forts to see how they may one day be restored to their former glory and brought into public use. Someone Took A Camera Inside A General Store Untouched Since 1963 And It's Like Exhuming A Time Capsule. There's No Place Quite like that Big Empty Mansion sitting on a Hilltop outside NYC. Brunswick Town – The Abandoned Colonial Town in North Carolina. Brunswick Town was a major colonial trading port in the Cape Fear region of North Carolina, that was abandoned during the on-set of the American Revolutionary War in 1775. 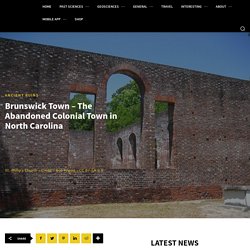 Prior to European settlement in the region, North Carolina was inhabited by tribes of Native Americans called the Cape Fear Indians (possibly called the Daw-hee). The Cape Fear Indians lived in coastal settlements along the Cape Fear River, but their population was decimated by smallpox spread from Spanish colonies in Florida to the Carolinas in the 16th century. The Cape Fear Indians migrated from their villages and settled inland near Charleston in what is now known as Williamsburg County, having sold the area of Cape Fear River and adjacent lands to the British colonist William Hilton. In 1725, 1,500 acres of land was granted to Colonel Maurice Moore by the Lord Proprietors, who founded Brunswick Town in June of 1726.

Header Image – St. My 18 Photos Show The Eerie Aftermath Of The Fukushima Nuclear Disaster. It was March 11th, 2011 in the Fukushima Prefecture of Japan. 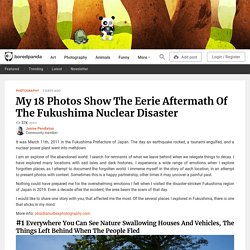 The day an earthquake rocked, a tsunami engulfed, and a nuclear power plant went into meltdown. I am an explorer of the abandoned world. I search for remnants of what we leave behind when we relegate things to decay. I have explored many locations with sad tales and dark histories. I experience a wide range of emotions when I explore forgotten places, as I attempt to document the forgotten world. 30 Eerie Pictures Of Abandoned Places, As Shared In This Online Community.

One thing that I firmly believe all human beings share is our inner yearning for adventure. 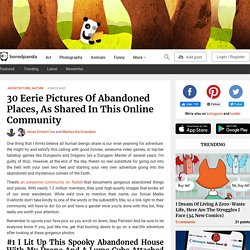 We might try and satisfy this calling with good movies, awesome video games, or top-tier tabletop games like Dungeons and Dragons (as a Dungeon Master of several years, I’m guilty of this). However, at the end of the day, there’s no real substitute for going out into the field with your own two feet and starting your very own adventure going into the abandoned and mysterious corners of the Earth. There’s an awesome community on Reddit that documents gorgeous abandoned things and places. A Beginner's Guide to Italian Ghost Towns Selling Houses for €1. Paddock – Churchill’s Secret Bunker. During WW2, a secret bunker complex codenamed “Paddock” and “CWR2” was constructed near Paddock Road on the site of the Post Office Research and Development Station in Dollis Hill London. 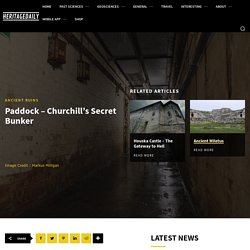 The purpose of the complex was to provide a reserve headquarters for the War Cabinet, and the Chief of Staff of the navy, air force, and land forces in the event that the adapted Cabinet War Room opposite St. James’s Park was no longer viable. Explore an abandoned research lab. American Cyanamid was a leading fertilizer company whose success broadened its horizons to a vast range of industrial and chemical products. 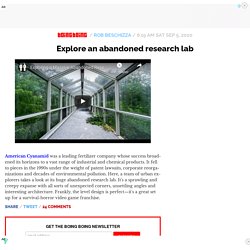 It fell to pieces in the 1990s under the weight of patent lawsuits, corporate reorganizations and decades of environmental pollution. Here, a team of urban explorers takes a look at its huge abandoned research lab. It's a sprawling and creepy expanse with all sorts of unexpected corners, unsettling angles and interesting architecture. Frankly, the level design is perfect—it's a great set up for a survival-horror video game franchise. Neuralink, Elon Musk's brain-computer biz, unveils pig with chip in brain "This is increasingly sounding like a Black Mirror episode"—Elon Musk, introducing Neuralink.

I Photographed This Beautiful Abandoned Palace In Poland (30 Pics) The Rzewuski Palace was built in the years 1921–1922. 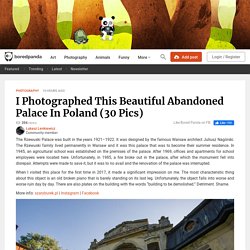 It was designed by the famous Warsaw architect Juliusz Nagórski. The Rzewuski family lived permanently in Warsaw and it was this palace that was to become their summer residence. In 1945, an agricultural school was established on the premises of the palace. After 1969, offices and apartments for school employees were located here. Photographer Explores A Perfectly Preserved 19th Century Cottage, That Even Has A Newspaper Reporting The Titanic Sinking. Here’s a question. 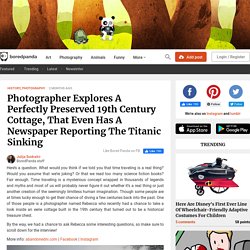 What would you think if we told you that time traveling is a real thing? Would you assume that we’re joking? Or that we read too many science fiction books? Fair enough. Time traveling is a mysterious concept wrapped in thousands of legends and myths and most of us will probably never figure it out whether it’s a real thing or just another creation of the seemingly limitless human imagination. By the way, we had a chance to ask Rebecca some interesting questions, so make sure to scroll down for the interview! More info: abandonedni.com | Facebook | Instagram. Nearly 50 Years On, a Forbidden Seaside Ghost Town is about to Re-Open. 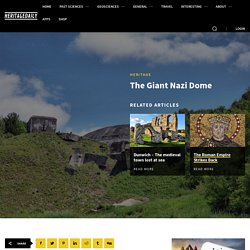 The bunker was an ambitious project to construct a permanent V-2 launch installation in the side of a disused chalk quarry, capped by an immense concrete dome. The V-2 (German: Vergeltungswaffe 2, “Retribution Weapon 2”) was the world’s first long-range guided ballistic missile, designed to attack Allied cities in retaliation for the Allied bombings against German cities. James kerwin reveals beirut's derelict architecture in 'a paradise lost' Following world war II, beirut became known as ‘the paris of the middle east’ due to its french-colonial architecture and vibrant culture, which drew tourists, intellectuals and investors to the lebanese capital. however, this boom period ended in 1975 with the outbreak of civil war and since then the country has been further marked by various conflicts. after researching the country’s complex history, photographer james kerwin embarked on a trip to lebanon to document the derelict, yet beautiful buildings that have been left behind. 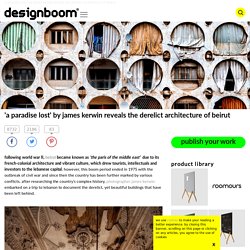 ‘triple bypass | derelict mansion’ high ceilings were born from the need to cool rooms during lebanon’s hot summers all images © james kerwin. This Abandoned Movie Set in Iceland Looks Like an Old Viking Village. This Is Hands-Down the Creepiest House in the United States. It wouldn't have been pleasant to live in Carleton Villa in those days, but imagine what it's like now. Other than the occasional urban spelunker, the house has been virtually abandoned ever since.

Its tower is now long gone, torn down when it began to threaten the rest of the structure. But perhaps not all hope is lost. In Wünsdorf, Germany, the 'Forbidden City' is an echo of the Soviet past. Wünsdorf, Germany (CNN) — Deep inside a pine forest in eastern Germany, a statue of Lenin keeps watch over a lemon-colored building that has housed everyone from the Kaiser Willhelm II, to the Nazis, and the Soviets.

The abandoned military complex -- known as the Forbidden City -- sits behind a hefty padlocked gate in the quiet neighborhood of Wünsdorf. It has been empty since the last remaining Russian soldiers left 25 years ago, following the fall of the Iron Curtain. It wasn't always like this. The site was once home to around 40,000 Soviet soldiers, earning it the nickname "Little Moscow in East Germany," says tour guide Werner Borchert. 14 Historic Places That Are Now Abandoned. America's abandoned towns falling into ruin. Laver Ruins – Älvsbyn V, Sweden. When Laver was constructed in the 1930s, it was the most modern town in Sweden.

45 Times Nature Won The Battle Against Civilization (New Pics) My 22 Pics Show A Post-Soviet Amusement Park In Elektrenai, Lithuania. Exploring closed Chernobyl-like Amusement Park in Elektrėnai, Lithuania. The Park was built during the Soviet Era as a part of the modern borough. More info: ctdots.eu Prologue for amusement When you try to imagine a post-apocalyptic world – what imagery comes to your mind?

Perhaps some movies like Mad Max, Waterworld, Stalker, Twelve Monkeys or my personal favorite The Road? I Visited A Soviet Nuclear Missile Base In Lithuania (22 Pics) Abandoned Luten Arch Bridge – Summerville, Georgia. Ruins of Aleister Crowley's Cursed House on Loch Ness for Sale. Rob Hackman - Photography. So in Albania, the Number of Abandoned Bunkers is Kind of a Problem. Nature strikes back in "The Beauty of Decay" photographic series. World War II battlefield Tarawa Kiribati is about to disappear forever.

As Close as You Can Get To Red Dead In Real Life – Architectural Afterlife. Scariest Ghost Towns in America. Is This the Spookiest Place in North America? Atlasobscura. British island fort up for sale, needs work before move in day. Located off the coast of Milford Haven, south Wales, Stack Rock Fort has an interesting history. English statesman Thomas Cromwell originally proposed a fort on the site back in 1539, shortly before losing his head to Henry VIII. It was eventually built in 1852 and served in a chain of fortifications to protect against invasion from France under Napoleon III. These photos of abandoned malls and golf courses reveal a new era for the American suburb. Inside Chicago's shuttered Lincoln Mall.Seph Lawless. Atlasobscura. Of all the abandoned hotels that photographer Shane Thoms captured for his book Haikyo: The Modern Ruins of Japan, the one he finds most compelling is the Royal Hotel.

A vast, ornate, crumbling structure on the volcanic Hachijo Island, it has everything Thoms wants from a ruin. “Exploring this marvelous, massive and haunting structure was just like stepping into a Tim Burton film set,” he says. Site that's been abandoned since World War II gets its only visitors of the year. By Anthony Bond Updated: 12:59 BST, 2 January 2012 Up and down rural England, many villages are shadows of their former selves as local amenities like post offices and pubs struggle to survive. Massacres, deceit, and treasure still haunt this notorious Route 66 ghost town. Route 66 wasn’t all family road trips and kitschy neon… surprisingly, the famed Mother Road has a darker side as well. 9 Strange and Mysterious Ghost Towns to Visit—If You Dare. Atlasobscura. The small village near Trinity Bay, Newfoundland, was once a charming place to live. A quaint, centuries-old fishing village, that overlooked the sea, with winding lanes, asymmetrical “saltbox” family homes, and quiet streets filled with a post office, church, and a graveyard.