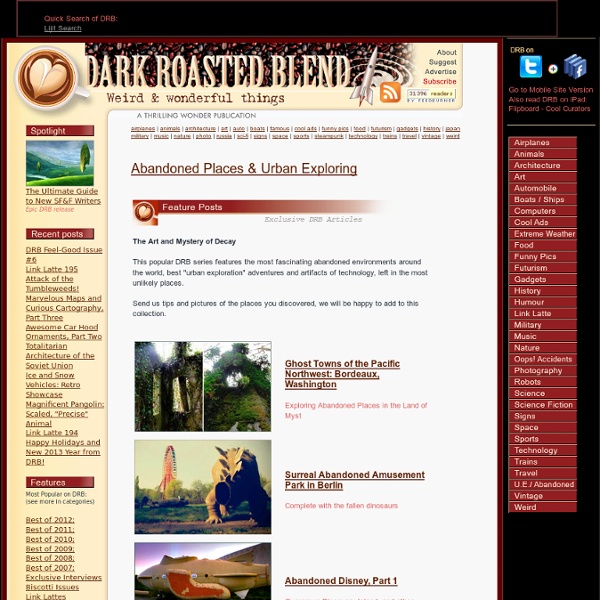 Photovisi - Photo Collage Maker abandoned places Abandoned Amusement Parks in Asia "QUANTUM SHOT" #523Link - by A. Abrams Spirited Away, or Spirited for Good? They may be closed, but they're still a lot of fun! We've already covered a couple of parks close to Seoul. (image credit: Olivier Malosse) French urban explorer Olivier Malosse visited the once-famous "Koga Family Land" Park in Shiga Prefecture, Japan. Sad toys hang around - and a bunch of ferocious rabbits haunts the premises: Spectacularly overgrown roller coaster - and "Okutama Ropeway" still offers great view from the cabins: (images copyright and courtesy Olivier Malosse) Rust in the Mist - "Takakanonuma Greenland" Park Another highly evocative location is actually quite famous among urban explorers - the images are well-known, but still worth seeing. Here is a misty ride 250km north of Tokyo (for those who want coordinates - 37°49'02.16"N 140°33'05.78"E): (images credit: Spiral) Would you trust these rusty rails with another ride? (image credit: JensofJapan, via) (images credit: Spiral) (images credit: Wesley) ...

How To Make Digital Photos Look Like Lomo Photography A Post By: Darren Rowse The following tip on getting digital images to look like Lomo Images was submitted by DPS reader – Frank Lazaro. You can see his photography at his Flickr page and see some of his Lomo shots here NB: most of the shots in this post can be enlarged by clicking them. update: once you’ve read this tutorial and had an experiment with the technique head to our Forum to share some of your results. From the first time I saw a photo that looked like this, I wanted to shoot one of my own. But, for the longest time I couldn’t figure it out how people took photos look like this. Low and behold I went out and bought 2 of these babies. I searched and searched and after trying several different Photoshop methods, I finally came up with my own using a mix of different techniques. Get Free Weekly Digital Camera Tips via Email Here is my step by step on how I take a digital photo and make it Lomoified. Getting Started – Creating a Vignette Now you have a vignette.

25 Websites To Have Fun With Your photos - Photofunia | Online photo editor | Shareittips.com There’re some really great sites out there that allows you to add effects to your photo by using their existing effect-templates. Here’s a collection of 25 Sites To Have Fun With Your Photos. 1.) PhotoFunia One of the hottest site with tons of creative backgrounds to play around with. 2.) If you don’t get what you want from PhotoFunia, you reallly need to check out this site. 3.) Create a photo mosaic of your choice for free online. 4.)Hairmixer Choose a photo for the left and right side and start mixing their hairs up. 5.)Photo505 We’d say, with Photo505, Photofunia and Fun Photo Box, you’ll be buzy for days. 6.)Yearbook Yourself Turn your face photo into yearbook alike black & white old school photo. 7.)Loonapic Make funny photos by embedding your face from the photo to the various templates. 8.)Magmypic Create different fake magazine covers from your photos. 9.)Your Own Wired Cover Powered by Xerox, this service allows you to create your own Wired magazine cover. 10.)Hollywood Hair Makeover

The Kingston Lounge Captured: The Ruins of Detroit Posted Feb 07, 2011 Share This Gallery inShare850 Up and down Detroit’s streets, buildings stand abandoned and in ruin. French photographers Yves Marchand and Romain Meffre set out to document the decline of an American city. Their book “The Ruins of Detroit“, a document of decaying buildings frozen in time, was published in December 2010. From the photographers’ website: Ruins are the visible symbols and landmarks of our societies and their changes, small pieces of history in suspension. The state of ruin is essentially a temporary situation that happens at some point, the volatile result of change of era and the fall of empires. Photography appeared to us as a modest way to keep a little bit of this ephemeral state. William Livingstone House # Michigan Central Station # Atrium, Farwell Building # 18th floor dentist cabinet, David Broderick Tower # Bagley-Clifford Office of the National Bank of Detroit # Ballroom, American Hotel # Melted clock, Cass Technical High School # Detroit?