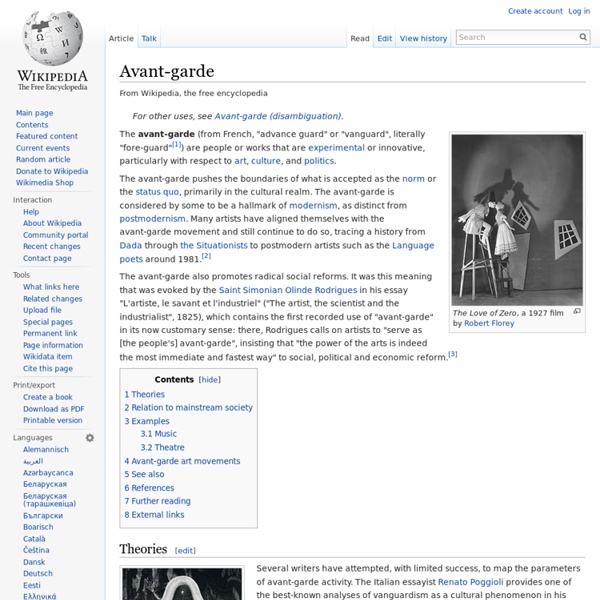 The avant-garde (from French, "advance guard" or "vanguard", literally "fore-guard"[1]) are people or works that are experimental or innovative, particularly with respect to art, culture, and politics. The avant-garde also promotes radical social reforms. It was this meaning that was evoked by the Saint Simonian Olinde Rodrigues in his essay "L'artiste, le savant et l'industriel" ("The artist, the scientist and the industrialist", 1825), which contains the first recorded use of "avant-garde" in its now customary sense: there, Rodrigues calls on artists to "serve as [the people's] avant-garde", insisting that "the power of the arts is indeed the most immediate and fastest way" to social, political and economic reform.[3] Theories[edit] Several writers have attempted, with limited success, to map the parameters of avant-garde activity. Bürger's essay also greatly influenced the work of contemporary American art-historians such as the German Benjamin H. Relation to mainstream society[edit]

Pablo Picasso Picasso, Henri Matisse and Marcel Duchamp are regarded as the three artists who most defined the revolutionary developments in the plastic arts in the opening decades of the 20th century, responsible for significant developments in painting, sculpture, printmaking and ceramics.[4][5][6][7] Picasso demonstrated extraordinary artistic talent in his early years, painting in a realistic manner through his childhood and adolescence. During the first decade of the 20th century, his style changed as he experimented with different theories, techniques, and ideas. His work is often categorised into periods. While the names of many of his later periods are debated, the most commonly accepted periods in his work are the Blue Period (1901–1904), the Rose Period (1904–1906), the African-influenced Period (1907–1909), Analytic Cubism (1909–1912), and Synthetic Cubism (1912–1919). Early life Pablo Picasso and his sister Lola, c.1889 Picasso showed a passion and a skill for drawing from an early age. Fame

Expressionism Expressionism was a modernist movement, initially in poetry and painting, originating in Germany at the beginning of the 20th century. Its typical trait is to present the world solely from a subjective perspective, distorting it radically for emotional effect in order to evoke moods or ideas.[1][2] Expressionist artists sought to express meaning[3] or emotional experience rather than physical reality.[3][4] Origin of the term[edit] In 1905, a group of four German artists, led by Ernst Ludwig Kirchner, formed Die Brücke (the Bridge) in the city of Dresden. This was arguably the founding organization for the German Expressionist movement, though they did not use the word itself. A few years later, in 1911, a like-minded group of young artists formed Der Blaue Reiter (The Blue Rider) in Munich. "View of Toledo" by El Greco, 1595/1610 has been indicated to have a particularly striking resemblance to 20th-century expressionism. Expressionist-Visual artists[edit] In other arts[edit] Dance[edit]

Cubism A primary influence that led to Cubism was the representation of three-dimensional form in the late works of Paul Cézanne, which were displayed in a retrospective at the 1907 Salon d'Automne.[3] In Cubist artwork, objects are analyzed, broken up and reassembled in an abstracted form—instead of depicting objects from one viewpoint, the artist depicts the subject from a multitude of viewpoints to represent the subject in a greater context.[4] Conception and origins[edit] Pablo Picasso, 1909-10, Figure dans un Fauteuil (Seated Nude, Femme nue assise), oil on canvas, 92.1 x 73 cm, Tate Modern, London Cubism began between 1907 and 1911. Pablo Picasso's 1907 painting Les Demoiselles d'Avignon has often been considered a proto-Cubist work. Georges Braque's 1908 Houses at L’Estaque (and related works) prompted the critic Louis Vauxcelles to refer to bizarreries cubiques (cubic oddities). John Berger identifies the essence of Cubism with the mechanical diagram. "M. Cubism before 1914[edit]