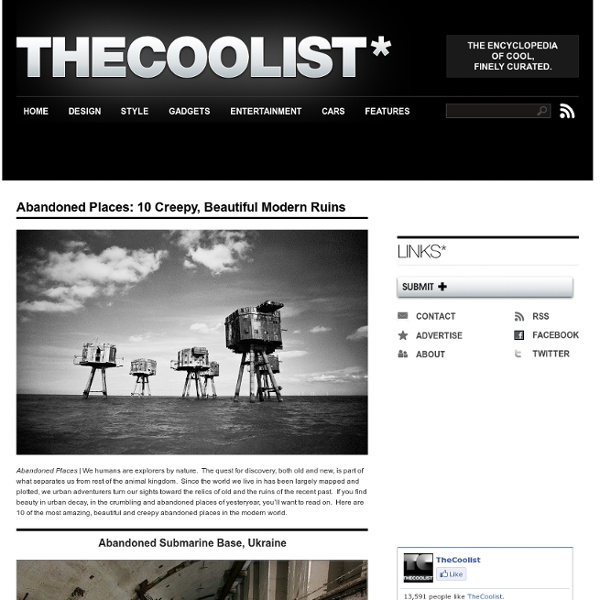 Abandoned Places: 10 Creepy, Beautiful Modern Ruins Abandoned Places | We humans are explorers by nature. The quest for discovery, both old and new, is part of what separates us from rest of the animal kingdom. Since the world we live in has been largely mapped and plotted, we urban adventurers turn our sights toward the relics of old and the ruins of the recent past. If you find beauty in urban decay, in the crumbling and abandoned places of yesteryear, you’ll want to read on. Here are 10 of the most amazing, beautiful and creepy abandoned places in the modern world. Abandoned Submarine Base, Ukraine In a bay on the northern shores of the Black Sea, the Soviet army maintained an elaborate submarine base throughout much of the Cold War. Abandoned Submarine Base Gallery The Ruins of Detroit by Marchand and Meffre In the United States, few cities have felt the burn of urban decay more than Detroit. Ruins of Detroit Gallery Beelitz Military Hospital, Berlin Beelitz Military Hospital Gallery

Abandoned Six Flags Hurricane Katrina killed this clown. According to the photographer, “An abandoned Six Flags amusement park, someone spray painted ‘Six Flags 2012 coming soon’ on the wall above the downed head. But they were clownin.’ Six Flags will never rebuild here.” That’s sad, but much of New Orleans has not been restored to her former glory. This defunct amusement park on the cityâ€™s eastern edge must surely serve as a constant reminder that Katrina tried to wash them off the map. 22 Incredible Photos of Faraway Places Thailand Chances are you already know Steve McCurry as the man who took one of the most iconic photos of our time. It was of a 12-year-old Afghan refugee girl who's piercing green eyes told us her harrowing story. The image itself was named "the most recognized photograph" in the history of the National Geographic magazine and her face became famous as the cover photograph on their June 1985 issue.

Human bones take part in an artistic project against violence The skeleton bones you see in these pictures are real human bones, believe it or not. Francois Robert purchased some old metal lockers several years ago at an auction, and one of the lockers contained real human bones, so he figured out that he had to use them in some way. The result was to make different shapes that are 6 feet wide by using the bones – a project he called “Stop the Violence” that will make others aware of the violence caused by wars. The shapes are mostly inspired by war and ideologies, and they are everything from guns and bombs to the signs of the different religions.

Improve your photography with clasical art. Adjusting your photographs to get the color 'just right' can be a chore. Think about this: The Old Masters of painting spent years of their lives learning about color. Why let all their effort go to waste on the walls of some museum when it could be used to give you a hand with color correction? Battleship Island - Japan's rotting metropolis These days the only things that land on Hashima Island are the shits of passing seagulls. An hour or so’s sail from the port of Nagasaki, the abandoned island silently crumbles. A former coal mining facility owned by Mitsubishi Motors, it was once the most densely populated place on earth, packing over 13,000 people into each square kilometre of its residential high-risers.

The List Blog Ford Strikers Riot Photographer: Milton Brooks Year: 1942 Pulitzer Ford Strikers Riot was taken during the 1941 workers' strike at a Fordmanufacturing plant. The picture shows a worker beating a strikebreaker,who is trying to protect himself by pulling his coat over his head and face.Describing the circumstances surrounding the photo, Milton Brooks said, "Itook the picture quickly, hid the camera under my coat and ducked into thecrowd. A lot of people would have liked to wreck that picture."

How to Suck at Facebook All artwork and content on this site is Copyright © 2015 Matthew Inman. Please don't steal. TheOatmeal.com was lovingly built using CakePHP 50 Incredible Photography Techniques and Tutorials Advertisement Over the recent months we’ve been presenting various showcases of photography – while many readers hated the showcases, most readers found them inspirational and perfect for a lousy workday’s morning. However, what we should have done in the inspirational posts is not just provide you with some inspiration for your work, but also present useful photographic techniques which can help you to achieve optimal pictures for your designs. And as requested by many of you, now it’s time to correct our mistake. In this post we present useful photographic techniques, tutorials and resources for various kinds of photography. You’ll learn how to set up the perfect environment and what techniques, principles and rules of thumbs you should consider when shooting your next perfect photo.