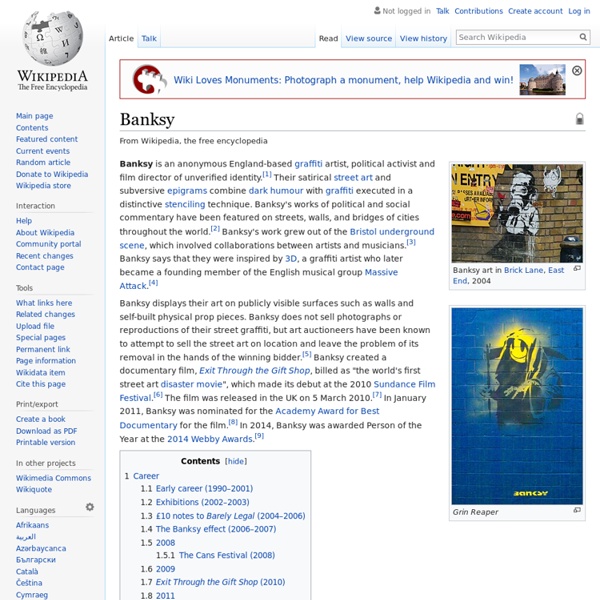 Banksy is an anonymous England-based graffiti artist, political activist and film director of unverified identity.[1] Their satirical street art and subversive epigrams combine dark humour with graffiti executed in a distinctive stenciling technique. Banksy's works of political and social commentary have been featured on streets, walls, and bridges of cities throughout the world.[2] Banksy's work grew out of the Bristol underground scene, which involved collaborations between artists and musicians.[3] Banksy says that they were inspired by 3D, a graffiti artist who later became a founding member of the English musical group Massive Attack.[4] Banksy displays their art on publicly visible surfaces such as walls and self-built physical prop pieces. Career Early career (1990–2001) Banksy's stencils feature striking and humorous images occasionally combined with slogans. Exhibitions (2002–2003) £10 notes to Barely Legal (2004–2006) The Banksy effect (2006–2007) Banksy[29] The Cans Festival (2008)

Graffiti art to boost your inspiration - StumbleUpon Graffiti (or spray paint) often regarded by others as unsightly damage or unwanted vandalism. But some times, the boring wall is supplied with a true piece of graffiti art, making it a joy for the eyes. A new game from Atari, Getting Up, is based on tagging. I made a collection of pictures showing these fine spray paint creations. By looking at them and studying the details, you could boost your (Photoshop) design inspiration. Please take note that I'm not showing any graffiti tags or space spray paint in this article. Beautiful graffiti art Click on the images to enlarge. Sources Actually, the last one indeed is a tag. I still can't believe some of them are actually graffiti. Tags: graffiti art photoshop design inspiration Interested in this topic?