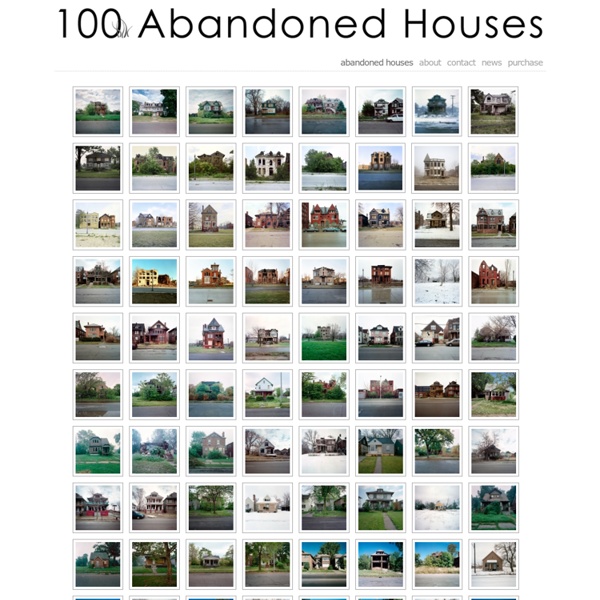 Urban Explorer and Photographer Dan Marbaix Takes Stunning Photographs of Abandoned Buildings Photographer Dan Marbaix is what is known as an "urban explorer." He travels from city to city, exploring abandoned houses, asylums, churches, state buildings and much, much more. He has been arrested over 20 times for his trespassing - and even held at gunpoint - but he refuses to give up his search for things that exist outside of the mundane. You'll see why. Dan wasn't supposed to be in ANY of these places, but you'll be glad he was. Above is an abandoned house in Germany.

atlasobscura Thirty miles off the southern coast of Cuba lies La Isla de la Juventud, the “Isle of Youth.” It is covered in lush vegetation and pine forests, and about half of the island falls under a “special municipality” designation, which prevents access except for those who have the proper permit from the Cuban government. The island is also home to the great ruin of an unusual and historic prison. Beds covered in moss, rubble strewn floors, crumbling German hotel left to rot for more than two decades Inhospitable: London photographer Andre Govia visited the abandoned hotel to capture the decay in a series of haunting pictures Dated: Time seems to have stood still inside the abandoned Plaza Hotel, located in Germany Its majestic dome still directed toward the heavens, now covered in graffiti and left to rust - inside the stunning abandoned astronomical observatory atop a Spanish mountain. Standing 2,605m above sea level in the region of Andalucia, the Mohon del Trigo observatory has been empty for nearly 40 years. The observatory at Mohsn del Trigo was built in 1902 after planners judged the clear skies of the isolated Sierra Nevada mountains to be perfect for stargazing.

atlasobscura The small village near Trinity Bay, Newfoundland, was once a charming place to live. A quaint, centuries-old fishing village, that overlooked the sea, with winding lanes, asymmetrical “saltbox” family homes, and quiet streets filled with a post office, church, and a graveyard. It would be an idyllic, country scene, apart from the fact there are no people. A Rich Woman Abandoned This Apartment In 1942. What They Just Found Inside Is Incredible. Madame de Florian was a French socialite and actress who fled to the south of France during World War II. She kept her apartment in Paris on the Right Bank near the Opéra Garnier, though, in case she wanted to return. However, she never went back to it after the war. Since 1942, the apartment has been sitting untouched, until recently when an auctioneer entered her apartment.

9 Strange and Mysterious Ghost Towns to Visit—If You Dare Ghost towns are a fascinating part of the history of the United States. Dotted across the American landscape, these relics from the past lie abandoned, slowly being reclaimed by nature. Once bustling with bars, brothels, and bandits, today these towns are eerily desolate and so perfectly preserved that you’d think they’d been abandoned overnight. 30 Pics That Show Mother Nature Reclaiming What Was Once Hers. This Is Kinda Creepy... Chernobyl Power Plant: In 1986, a nuclear disaster required that people flee Chernobyl. The first photo was taken in 1990, and the bottom one in 2013.

Massacres, deceit, and treasure still haunt this notorious Route 66 ghost town Route 66 wasn’t all family road trips and kitschy neon… surprisingly, the famed Mother Road has a darker side as well. No better place embodies the seedy side of Route 66 quite like the former tourist town of Two Guns, Arizona. Pretty appropriate name, huh? 6 Forgotten Places, Rediscovered Visiting these rooms, businesses, and homes is like traveling back in time. 1. The Old Operating Theatre Wikimedia Commons In 1822, there was no surgical anesthesia.