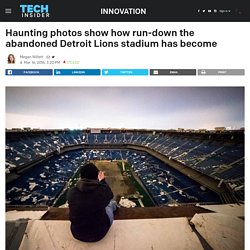 The massive building cost $55.7 million to build when it was first constructed back in 1975. It hosted Super Bowl XVI in 1982, a Michael Jackson Victory Tour concert in 1984, and the 1994 FIFA World Cup. But by 2002, the Detroit Lions had moved into Ford Field in downtown Detroit and the Silverdome was abandoned. Since then, it's been used only sporadically and suffered major damage after a 2013 winter storm destroyed its inflatable roof.

Photographer Johnny Joo gained access to the Silverdome back in 2014 and 2015. Detroiturbex.com - Locations. Since 2005, Detroit has closed more than 100 of its schools. 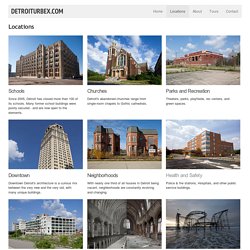 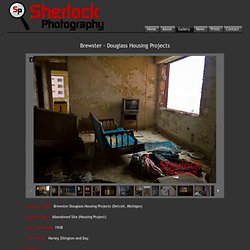 In 1952, the Frederick Douglass Apartment towers were completed, making Brewster-Douglass the largest housing project owned by the City of Detroit. In 1991 the low-rise apartment blocks were razed and replaced by 250 townhomes, now known as the New Brewster Homes. Sources. Brewster and Me: Photo Essay Exploring One of Detroit's Notorious Abandoned Housing Projects. This year marks the sixtieth anniversary of the Brewster-Douglass housing projects of Detroit Michigan and there is nothing to celebrate. 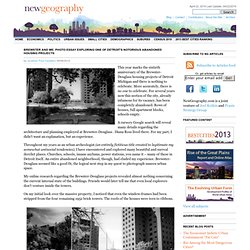 More accurately, there is no one to celebrate. For several years now this section of the city, already infamous for its vacancy, has been completely abandoned. Rows of houses, full apartment blocks, schools empty. A cursory Google search will reveal many details regarding the architecture and planning employed at Brewster-Douglass . Diana Ross lived there. Throughout my years as an urban archeologist (an entirely fictitious title created to legitimate my somewhat antisocial tendencies), I have encountered and explored many beautiful and surreal derelict places. My online research regarding the Brewster-Douglass projects revealed almost nothing concerning the current internal state of the buildings. On my initial look over the massive property, I noticed that even the window-frames had been stripped from the four remaining 1952 brick towers. 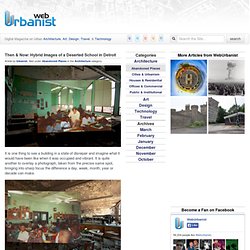 It is one thing to see a building in a state of disrepair and imagine what it would have been like when it was occupied and vibrant. It is quite another to overlay a photograph, taken from the precise same spot, bringing into sharp focus the difference a day, week, month, year or decade can make. DetroitUrbex takes documentation to new depths (and heights) in this series of collages that show historical use and present conditions in abandoned structures through the lens of students and teachers overlaid with the haunting shots of an urban explorer.

Detroit's amazing transformation captured on camera after it loses ONE MILLION residents in 60 years. By Daily Mail Reporter Published: 01:28 GMT, 2 October 2012 | Updated: 20:28 GMT, 3 October 2012 When it comes to embattled cities, Detroit has suffered more than most - with a dramatically declining population, crumbling industries and homes and buildings abandoned. 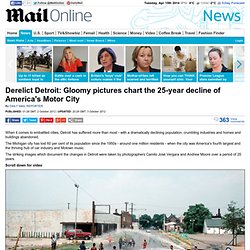 The Michigan city has lost 60 per cent of its population since the 1950s - around one million residents - when the city was America's fourth largest and the thriving hub of car industry and Motown music. The striking images which document the changes in Detroit were taken by photographers Camilo José Vergara and Andrew Moore over a period of 25 years. Scroll down for video Dancing in the streets: East Palmer Street towards Chene Street in Detroit as the temperature hit 95 degrees in 1995 Green shoots: Graffiti on disused buildings along East Palmer Street, Detroit, earlier this year Once busy streets have been turned over to farmland and bustling shopfronts lie empty but brightened up with graffiti. Detroit – Now And Then. 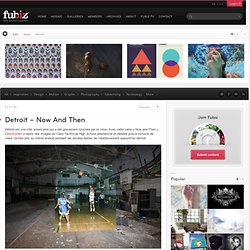