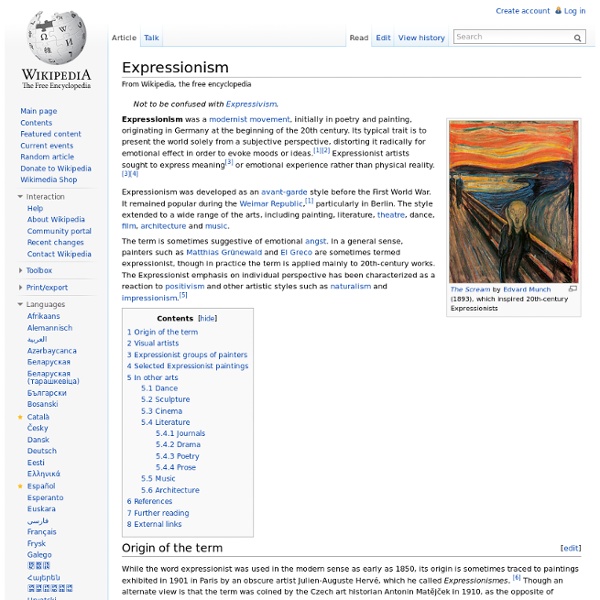 Expressionism was a modernist movement, initially in poetry and painting, originating in Germany at the beginning of the 20th century. Its typical trait is to present the world solely from a subjective perspective, distorting it radically for emotional effect in order to evoke moods or ideas.[1][2] Expressionist artists sought to express meaning[3] or emotional experience rather than physical reality.[3][4] Origin of the term[edit] In 1905, a group of four German artists, led by Ernst Ludwig Kirchner, formed Die Brücke (the Bridge) in the city of Dresden. "View of Toledo" by El Greco, 1595/1610 has been indicated to have a particularly striking resemblance to 20th-century expressionism. Expressionism has been likened to Baroque by critics such as art historian Michel Ragon [16] and German philosopher Walter Benjamin.[17] According to Alberto Arbasino, a difference between the two is that "Expressionism doesn't shun the violently unpleasant effect, while Baroque does. In other arts[edit]

Cubism A primary influence that led to Cubism was the representation of three-dimensional form in the late works of Paul Cézanne, which were displayed in a retrospective at the 1907 Salon d'Automne.[3] In Cubist artwork, objects are analyzed, broken up and reassembled in an abstracted form—instead of depicting objects from one viewpoint, the artist depicts the subject from a multitude of viewpoints to represent the subject in a greater context.[4] Conception and origins[edit] Pablo Picasso, 1909-10, Figure dans un Fauteuil (Seated Nude, Femme nue assise), oil on canvas, 92.1 x 73 cm, Tate Modern, London Cubism began between 1907 and 1911. By 1911 Picasso was recognized as the inventor of Cubism, while Braque’s importance and precedence was argued later, with respect to his treatment of space, volume and mass in the L’Estaque landscapes. John Berger identifies the essence of Cubism with the mechanical diagram. Technical and stylistic aspects[edit] "M. Cubism before 1914[edit]

Pablo Picasso Picasso, Henri Matisse and Marcel Duchamp are regarded as the three artists who most defined the revolutionary developments in the plastic arts in the opening decades of the 20th century, responsible for significant developments in painting, sculpture, printmaking and ceramics.[4][5][6][7] Picasso demonstrated extraordinary artistic talent in his early years, painting in a realistic manner through his childhood and adolescence. During the first decade of the 20th century, his style changed as he experimented with different theories, techniques, and ideas. Exceptionally prolific throughout the course of his long life, Picasso achieved universal renown and immense fortune for his revolutionary artistic accomplishments, and became one of the best-known figures in 20th-century art. Early life Pablo Picasso and his sister Lola, c.1889 Picasso showed a passion and a skill for drawing from an early age. Career beginnings Before 1900 Picasso's training under his father began before 1890. Blue Period

Sigmund Freud Sigmund Freud (/frɔɪd/;[2] German pronunciation: [ˈziːkmʊnt ˈfʁɔʏ̯t]; born Sigismund Schlomo Freud; 6 May 1856 – 23 September 1939) was an Austrian neurologist, now known as the father of psychoanalysis. Freud qualified as a doctor of medicine at the University of Vienna in 1881,[3] and then carried out research into cerebral palsy, aphasia and microscopic neuroanatomy at the Vienna General Hospital.[4] Upon completing his habilitation in 1895, he was appointed a docent in neuropathology in the same year and became an affiliated professor (professor extraordinarius) in 1902.[5][6] Psychoanalysis remains influential within psychotherapy, within some areas of psychiatry, and across the humanities. Biography[edit] Early life and education[edit] Freud's birthplace, a rented room in a locksmith's house, Příbor, Czech Republic Freud (aged 16) and his beloved[12] mother, Amalia, in 1872 In 1859, the Freud family left Freiberg. Freud entered the University of Vienna at age 17. Early followers[edit]

Special relativity Special relativity implies a wide range of consequences, which have been experimentally verified,[2] including length contraction, time dilation, relativistic mass, mass–energy equivalence, a universal speed limit, and relativity of simultaneity. It has replaced the conventional notion of an absolute universal time with the notion of a time that is dependent on reference frame and spatial position. Rather than an invariant time interval between two events, there is an invariant spacetime interval. Combined with other laws of physics, the two postulates of special relativity predict the equivalence of mass and energy, as expressed in the mass–energy equivalence formula E = mc2, where c is the speed of light in vacuum.[3][4] A defining feature of special relativity is the replacement of the Galilean transformations of classical mechanics with the Lorentz transformations. Postulates[edit] Lack of an absolute reference frame[edit] Relativity theory depends on "reference frames". where we get

Impressionism Impressionism is a 19th-century art movement that originated with a group of Paris-based artists. Their independent exhibitions brought them to prominence during the 1870s and 1880s, in spite of harsh opposition from the conventional art community in France. The name of the style derives from the title of a Claude Monet work, Impression, soleil levant (Impression, Sunrise), which provoked the critic Louis Leroy to coin the term in a satirical review published in the Parisian newspaper Le Charivari. Overview[edit] Radicals in their time, early Impressionists violated the rules of academic painting. Impressionism emerged in France at the same time that a number of other painters, including the Italian artists known as the Macchiaioli, and Winslow Homer in the United States, were also exploring plein-air painting. Beginnings[edit] In the middle of the 19th century—a time of change, as Emperor Napoleon III rebuilt Paris and waged war—the Académie des Beaux-Arts dominated French art.

Pre-Raphaelite Brotherhood The Pre-Raphaelite Brotherhood (also known as the Pre-Raphaelites) was a group of English painters, poets, and critics, founded in 1848 by William Holman Hunt, John Everett Millais and Dante Gabriel Rossetti. The three founders were joined by William Michael Rossetti, James Collinson, Frederic George Stephens and Thomas Woolner to form the seven-member "brotherhood". The group's intention was to reform art by rejecting what it considered the mechanistic approach first adopted by Mannerist artists who succeeded Raphael and Michelangelo. Beginnings[edit] Illustration by Holman Hunt of Thomas Woolner's poem "My Beautiful Lady", published in The Germ, 1850 Early doctrines[edit] The brotherhood's early doctrines were expressed in four declarations: First exhibitions and publications[edit] Public controversy[edit] Christ In the House of His Parents, by John Everett Millais, 1850 Later developments and influence[edit] After 1850, Hunt and Millais moved away from direct imitation of medieval art.

Industrial Revolution Iron and Coal, 1855–60, by William Bell Scott illustrates the central place of coal and iron working in the industrial revolution and the heavy engineering projects they made possible. The Industrial Revolution was the transition to new manufacturing processes in the period from about 1760 to sometime between 1820 and 1840. This transition included going from hand production methods to machines, new chemical manufacturing and iron production processes, improved efficiency of water power, the increasing use of steam power, and the development of machine tools. It also included the change from wood and other bio-fuels to coal. The Industrial Revolution marks a major turning point in history; almost every aspect of daily life was influenced in some way. Etymology Some historians, such as John Clapham and Nicholas Crafts, have argued that the economic and social changes occurred gradually and the term revolution is a misnomer. Important technological developments Textile manufacture Chemicals

Surrealism Surrealism is a cultural movement that began in the early 1920s, and is best known for its visual artworks and writings. The aim was to "resolve the previously contradictory conditions of dream and reality." Artists painted unnerving, illogical scenes with photographic precision, created strange creatures from everyday objects and developed painting techniques that allowed the unconscious to express itself and/or an idea/concept.[1] Surrealist works feature the element of surprise, unexpected juxtapositions and non sequitur; however, many Surrealist artists and writers regard their work as an expression of the philosophical movement first and foremost, with the works being an artifact. Leader André Breton was explicit in his assertion that Surrealism was, above all, a revolutionary movement. Surrealism developed out of the Dada activities during World War I and the most important center of the movement was Paris. Founding of the movement[edit] Surrealist Manifesto[edit] Expansion[edit]