The Ruins of Detroit 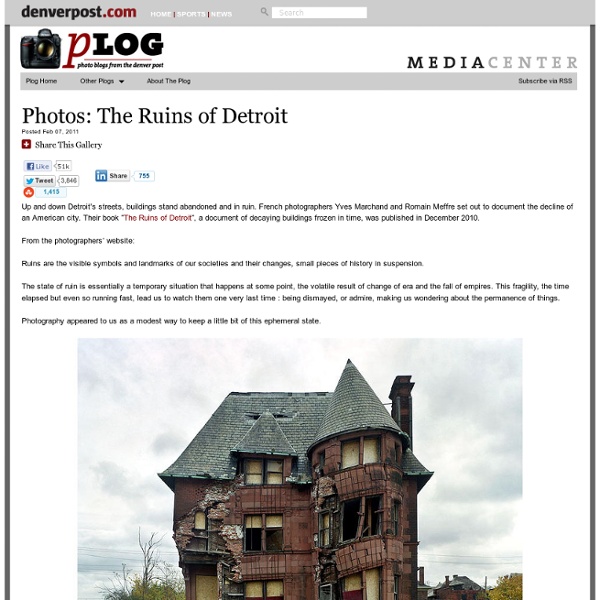 Posted Feb 07, 2011 Share This Gallery inShare850 Up and down Detroit’s streets, buildings stand abandoned and in ruin. French photographers Yves Marchand and Romain Meffre set out to document the decline of an American city. Their book “The Ruins of Detroit“, a document of decaying buildings frozen in time, was published in December 2010. From the photographers’ website: Ruins are the visible symbols and landmarks of our societies and their changes, small pieces of history in suspension. The state of ruin is essentially a temporary situation that happens at some point, the volatile result of change of era and the fall of empires. Photography appeared to us as a modest way to keep a little bit of this ephemeral state. William Livingstone House # Michigan Central Station # Atrium, Farwell Building # 18th floor dentist cabinet, David Broderick Tower # Bagley-Clifford Office of the National Bank of Detroit # Ballroom, American Hotel # Melted clock, Cass Technical High School # Detroit?

The world without us: Chernobyl Nature has made a determined comeback In the 20 years since Chernobyl's reactor No. 4 turned a bustling Soviet city into a ghost town. The people are gone, and in their place are now thriving populations of deer, elk, wild boar, wolves, and even lynx. Trees are pushing up through Lenin Avenue and moss is clinging to the broken sidewalks and abandoned buildings throughout the 19-miles that make up the Exclusion Zone. Tim Mousseau of the University of South Carolina has been studying the effects of radiation on Chernobyl's wildlife, and told National Geographic that despite the higher levels of genetic abnormalities, "one of the great ironies of this particular tragedy is that many animals are doing considerably better than when the humans were there." Radiation levels are still too high for long term exposure, but the Ukraine has opened up the nearby city of Pripyat to daytrippers looking to catch a glimpse of what an urban center would look like after 20 years without a human footprint.

22 Incredible Photos of Faraway Places Thailand Chances are you already know Steve McCurry as the man who took one of the most iconic photos of our time. It was of a 12-year-old Afghan refugee girl who's piercing green eyes told us her harrowing story. The image itself was named "the most recognized photograph" in the history of the National Geographic magazine and her face became famous as the cover photograph on their June 1985 issue. Beyond just that one photo, McCurry has shot over a million images spanning 35 years. More than anything, he is one of a few that has that amazing ability to capture stories of our shared human experience. How to make gift bags from newspaper When I bought something at a store recently, the clerk handed me my purchase in a bag made from a newspaper. I liked it very much and had to make some more—thus today's DIY recycled newspaper project: gift bags made from the Wall Street Journal. You can vary the dimensions, of course, but here's what I used to create a bag that's 5" tall, 4.5" wide, and 3" deep.

The most memorable photos from the Iraq War Posted Dec 30, 2011 Share This Gallery inShare21 After nearly nine years in Iraq, the final combat troops continue to arrive back in the U.S. Skellig Michael – Mysterious Monastery in the Atlantic Nine miles off the coast of County Kerry in the west of Ireland there are two small rocky islands peeking out of the Atlantic Ocean. The larger of the two, Skellig Michael, is home to something quite extraordinary – a 1400 year old monastery which only a handful of people get to see each year. As you approach the island there is little, seemingly, to notice. Yet closer inspection reveals the tell tale criss-cross of manmade paths.

Chris Jordan - In Katrina's Wake This series, photographed in New Orleans in November and December of 2005, portrays the cost of Hurricane Katrina on a personal scale. Although the subjects are quite different from those in my earlier Intolerable Beauty series, this project is motivated by the same concerns about our runaway consumerism. There is evidence to suggest that Katrina was not an entirely natural event like an earthquake or tsunami. The 2005 hurricane season's extraordinary severity can be linked to global warming, which America contributes to in disproportionate measure through our extravagant consumer and industrial practices. Carved Book Landscapes by Guy Laramee (click images for detail) For the better part of three decades multidisciplinary artist Guy Laramee has worked as a stage writer, director, composer, a fabricator of musical instruments, a singer, sculptor, painter and writer. Among his sculptural works are two incredible series of carved book landscapes and structures entitled Biblios and The Great Wall, where the dense pages of old books are excavated to reveal serene mountains, plateaus, and ancient structures. Of these works he says: So I carve landscapes out of books and I paint Romantic landscapes.

The Book Surgeon (15 pieces) Using knives, tweezers and surgical tools, Brian Dettmer carves one page at a time. Nothing inside the out-of-date encyclopedias, medical journals, illustration books, or dictionaries is relocated or implanted, only removed. Dettmer manipulates the pages and spines to form the shape of his sculptures. He also folds, bends, rolls, and stacks multiple books to create completely original sculptural forms. "My work is a collaboration with the existing material and its past creators and the completed pieces expose new relationships of the book’s internal elements exactly where they have been since their original conception," he says.

Corbis - XX Century in Black and White Photos BBC Men in Hats Watching the Sky Coco Chanel Robert Kennedy Conversing WithEdward Kennedy Buddhist Monk Committing RitualSuicide Famous Guests at the "Crescendo" Bomb Drill Abandoned Technology Scattered Across The Globe What would we do without technology? Often though, whether from disaster or lack of funding, celebrated technology becomes obsolete and is abandoned. Decay sets in to rust the disused places and objects which were once invaluable to us. 11 Abandoned American Hospitals and Asylums With some of the most disturbing and tragic histories of any buildings in the US, asylums and hospitals are way beyond creepy . Many of them were built in the late 1800s, when “mental illnesses” (such as masturbation, menopause, and teenage rebellion) were considered dangerous enough to lock someone in an asylum. A pain-inflicting misunderstanding of mental illness combined with a chronic mistreatment of its sufferers meant that many people were never released and spent the remainder of their lives in these horrible institutions. In addition to asylums, many sanatoriums were constructed around this time to care for the poor and very sick. Utilizing radical treatments that were incredibly painful yet ineffective, early hospitals often created more suffering than good for the inflicted.

Amazing Places To Experience Around The Globe (Part 1) Preachers Rock, Preikestolen, Norway Blue Caves - Zakynthos Island, Greece Skaftafeli - Iceland Plitvice Lakes – Croatia Crystalline Turquoise Lake, Jiuzhaigou National Park, China Sans Parapluie Turns Old Wardrobes into Pieces of Art Photos: SansParapluie.com Funny how with a touch of creativity, an old piece of furniture can not only come back to life, but also become a valuable work of art. This is the goal of Sans Parapluie, a line by Argentine artist Lucas Rise.We've seen many pieces of furniture refurbished with excellent taste before, even in Argentina: Livin Pop and Raval Warehouse are some examples. But Lucas Rise's work goes far from that: it's not just about recycling, but about creating a whole new universe for the object. 'Nigeria' model.