Pluto's distance from Earth makes its in-depth study and exploration difficult. On 14 July 2015, NASA's New Horizons space probe flew through the Pluto system, which will provide much information about it. 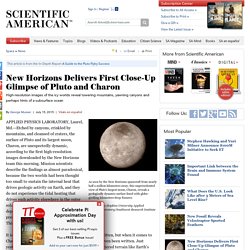 —Etched by canyons, crinkled by mountains, and cleansed of craters, the surface of Pluto and its largest moon, Charon, are unexpectedly dynamic, according to the first high-resolution images downloaded by the New Horizons team this morning. Mission scientists describe the findings as almost paradoxical, because the two worlds had been thought too small to sustain the internal heat that drives geologic activity on Earth, and they do not experience the tidal heating that drives such activity elsewhere in the outer solar system.

“The team has been abuzz,” deputy project scientist Cathy Olkin told a press briefing. “Look at this! Look at that! It is tempting to say that textbooks will need to be rewritten, but when it comes to Charon, so little was known that textbooks had barely even been written. Already, theories are emerging about the mysterious heat sources within Pluto's and Charon's interiors. NASA Set To Release New Images & Scientific Findings From New Horizons Today. 3 days ago, NASA made history. 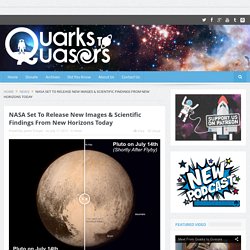 The New Horizons spacecraft, which left Earth nearly a decade ago, finally came, saw and conquered the dwarf planet, Pluto. However, we’ve yet to see more than mere glimpses of its cache of images and scientific data—the vast majority of said images have yet to be seen by any living person. But that will soon change Today, at precisely 1 p.m. Summer of Science - The Latest New Horizons Photos From Pluto: What to Expect. New Horizons encounter plus one week: Weird and wonderful images from the Pluto system. Posted By Emily Lakdawalla Topics: trans-neptunian objects, New Horizons, pretty pictures, Pluto, Charon, dwarf planets beyond Neptune So many new goodies from the Pluto system! 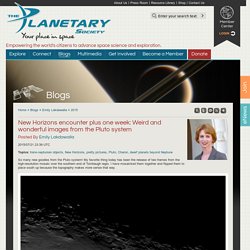 My favorite thing today has been the release of two frames from the high-resolution mosaic over the southern end of Tombaugh regio. I have mosaicked them together and flipped them to place south up because the topography makes more sense that way. NASA / JPL / JHUAPL / SwRI / Emily Lakdawalla The Mountains of Tombaugh Regio A mosaic of two images taken during New Horizons' flyby of Pluto covers the southernmost portion of Tombaugh regio, Pluto's "heart.

Connect With Us. Rendezvous with Pluto. View timeline Tiny, far-flung Pluto is about to have a visitor — at least for a few hours. 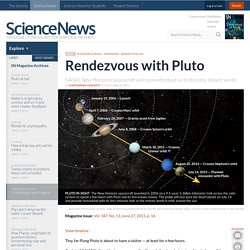 On July 14, NASA’s New Horizons spacecraft will reach the dwarf planet and try to learn all it can about Pluto and its five known moons. Then the probe will leave Pluto behind, vanishing into the frigid darkness beyond the planets. In its wake, New Horizons will introduce Earth to the last of the “classical planets.” Probes have flown past, orbited, crashed into or landed on every other world that orbits the sun. “This is the last picture show,” says Alan Stern, the mission’s leader.

Pluto is the doorway to the solar system’s “third zone,” the Kuiper belt, an icy junkyard beyond Neptune. An image taken 75 million kilometers from Pluto (bottom) shows hints of details not visible in 1930. Lowell Observatory (top), NASA, JHUAPL, SwRI (bottom) New Horizons has been traveling for 9.5 years across nearly 5 billion kilometers to take a hard, if quick, look at Pluto and its icy neighbors. An odd little world. NASA’s New Horizons Uncovers Hidden Secrets of Pluto’s Atmosphere. 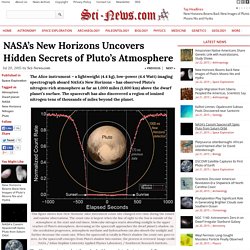 The spacecraft has also discovered a region of ionized nitrogen tens of thousands of miles beyond the planet. This figure shows how New Horizons’ Alice instrument count rate changed over time during the sunset and sunrise observations. The count rate is largest when the line of sight to the Sun is outside of the atmosphere at the start and end times. Molecular nitrogen starts absorbing sunlight in the upper reaches of Pluto’s atmosphere, decreasing as the spacecraft approaches the dwarf planet’s shadow.

As the occultation progresses, atmospheric methane and hydrocarbons can also absorb the sunlight and further decrease the count rate. “This is only the beginning for Pluto atmospheric science. Observation.