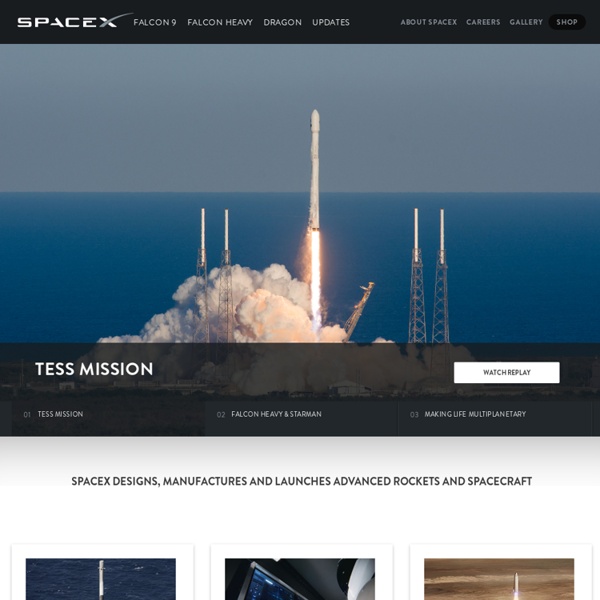 Science fact: Sci-fi inventions that became reality Image copyright Getty Images The story of a 14-year-old girl who won a landmark legal battle to be preserved cryogenically has many people wondering how such technology actually works - for many of us, it seems like something straight out of science fiction. But sci-fi has a long history of becoming science fact, as outlandish creations inspire real research. Anne’s Astronomy News November 30, 2012 SNR 0509-67.5, a supernova remnant in the LMC Image Credit: X-ray: NASA/CXC/SAO/J.Hughes et al, Optical: NASA/ESA/Hubble Heritage Team (STScI/AURA) SNR 0509-67.5 (SNR 0509 for short) is the remnant of a supernova explosion in the Large Magellanic Cloud, located some 160,000 light-years away in the constellation of Dorado.

Two Suns? Twin Stars Could Be Visible From Earth By 2012 By Dean Praetorius | HuffingtonPost.com Earth could be getting a second sun, at least temporarily. Dr. Brad Carter, Senior Lecturer of Physics at the University of Southern Queensland, outlined the scenario to news.com.au. ESMD New and Improved Antimatter Spaceship for Mars Missions Most self-respecting starships in science fiction stories use antimatter as fuel for a good reason – it’s the most potent fuel known. While tons of chemical fuel are needed to propel a human mission to Mars, just tens of milligrams of antimatter will do (a milligram is about one-thousandth the weight of a piece of the original M&M candy). SpaceX oddity: how Elon Musk sent a car towards Mars It takes a beat or two for the brain to compute. The image is startling, incongruous, barmy. A car floats in space. At the wheel is a spacesuit, seatbelt on.

Rise of the human exoskeletons On the outskirts of Pisa in a back room of a modern block, a machine is waiting for its operator. The device has arms and legs and is suspended by ropes from a metal frame. Its only other tether is a thick umbilical cable plugged into its back. After a few final checks, research engineer Gianluca approaches the machine, turns, and puts his feet on its feet and buckles them in. He straps himself in across his chest and puts his arms into its arms. With a finger he then presses a button, and the machine jolts into life, lights flashing and joints whirring as he cautiously steers his body suit across the floor.

Galleries - NASA Solar System Exploration National Aeronautics andSpace Administration Solar System Exploration beta Galleries Higgs boson: Have they found it? › News in Science (ABC Science) News in Science Monday, 12 December 2011 ABC/Reuters Zeroing in There are loud rumours that scientists at the CERN physics research centre in Europe have seen the first strong signs of a particle vital to support Einstein's ideas on the working of the universe. While warning there would be no announcement of a full scientific discovery, scientists say even confirmation that something like the long-sought Higgs boson had been spotted would point the way to major advances in knowledge of the cosmos. "I am feeling quite a level of excitement," says Dr Oliver Buchmueller, a senior member of one of the two teams seeking the particle amid vast volumes of data gathered in CERN's Large Hadron Collider (LHC) this year. And science bloggers with close contacts among the tight-lipped front-line research groups, known as ATLAS and CMS, say their understanding was that both had found signals that look very much like the Higgs.

Catalog Page for PIA01907 Click on the image forSpirit's Winter Panorama Labeled Version Since April of 2006, NASA's Mars Exploration Rover Spirit has been sojourning in a place called "Winter Haven," where the robotic geologist spent several months parked on a north-facing slope in order to keep its solar panels pointed toward the sun. During that time, while the rover spent the daylight hours conducting as much scientific research as possible, science team members assigned informal names to rock outcrops, boulders, and patches of soil commemorating exploration sites in Antarctica and the southernmost islands of South America. Antarctic bases are places where researchers, like the rovers on Mars, hunker down for the winter in subzero temperatures.