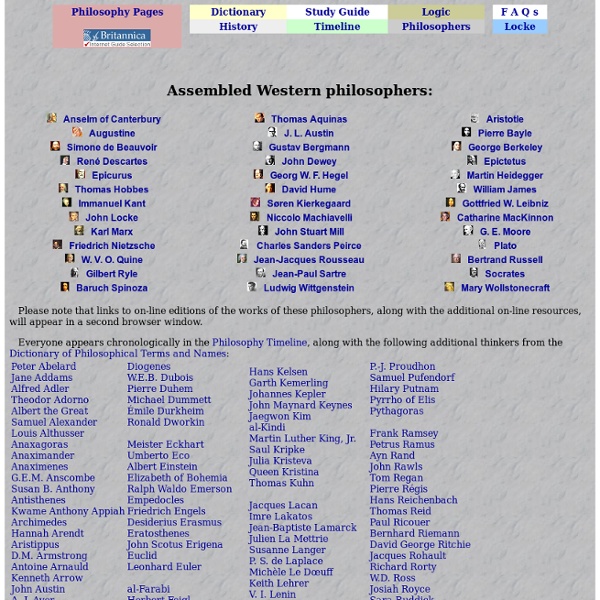 200 Free eBooks: Download Great Classics for Free Download 800 free eBooks to your Kindle, iPad/iPhone, computer, smart phone or ereader. Collection includes great works of fiction, non-fiction and poetry, including works by Asimov, Jane Austen, Philip K. Dick, F. Philosophy: Guide to Happiness We tend to accept that people in authority must be right. It's this assumption that Socrates wanted us to challenge by urging us to think logically about the nonsense they often come out with, rather than being struck dumb by their aura of importance and air of suave certainty. This six part series on philosophy is presented by popular British philosopher Alain de Botton, featuring six thinkers who have influenced history, and their ideas about the pursuit of the happy life. Socrates on Self-Confidence (Part 1) - Why do so many people go along with the crowd and fail to stand up for what they truly believe?

Force Field Analysis (Forcefield Analysis) - Decision-Making Skills Training from MindTools Analyzing the Pressures For and Against Change How to use Force Field Analysis, with James Manktelow & Amy Carlson. Force Field Analysis is a useful decision-making technique. It helps you make a decision by analyzing the forces for and against a change, and it helps you communicate the reasoning behind your decision. You can use it for two purposes: to decide whether to go ahead with the change; and to increase your chances of success, by strengthening the forces supporting change and weakening those against it. About the Tool

Philosophical Quotes, Thought-Provoking Sayings Related Quotes Hmmm Philosophy Truth Wise Words We are more often treacherous through weakness than through calculation. ~François VI de la Rochefoucault A man with one watch knows what time it is; a man with two watches is never quite sure. ~Lee Segall Philosophy Free Audio Sort by Titles Per Page 1 - 10 of 476 Titles by Plato Available on: Audio Download | Podcast Taxonomy of the Logical Fallacies How to Use the Taxonomy | Main Menu Acknowledgments: Thanks to David Goodey and Kent Gustavsson for pointing out missing links. PHILOSOPHY POSTERS by Max Temkin Philosophy is the study of general and fundamental problems, such as those connected with existence, knowledge, values, reason, mind, and language. Philosophy is distinguished from other ways of addressing such problems by its critical, generally systematic approach and its reliance on rational argument. The word “philosophy” comes from the Greek φιλοσοφία (philosophia), which literally means “love of wisdom“. In this case, Max Temkin, the artist, wanted to create posters with quotes that motivated people to think ‘different‘. More about Max Temkin’s philosophy posters

Guide to Philosophy on the Internet (Suber) Welcome to my collection of online philosophy resources. If you are stuck in a frame, click here to escape. If you are a frequent visitor, press reload or refresh on occasion to be sure that you are viewing the most recent version of the page, not the version cached on your hard drive from your last visit. I've marked recommended sites with a red star

Graphing the history of philosophy « Drunks&Lampposts A close up of ancient and medieval philosophy ending at Descartes and Leibniz If you are interested in this data set you might like my latest post where I use it to make book recommendations. This one came about because I was searching for a data set on horror films (don’t ask) and ended up with one describing the links between philosophers. To cut a long story very short I’ve extracted the information in the influenced by section for every philosopher on Wikipedia and used it to construct a network which I’ve then visualised using gephi