Teenage girl is dogs best friend. While most teenage girls are busy doing their nails and downloading the latest music, Faye Carey is helping re-home dozens of abandoned dogs. 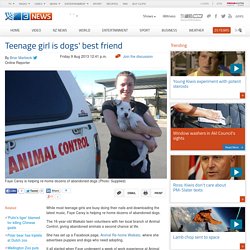 The 16-year-old Waikato teen volunteers with her local branch of Animal Control, giving abandoned animals a second chance at life. She has set up a Facebook page, Animal Re-home Waikato, where she advertises puppies and dogs who need adopting. It all started when Faye underwent a week of work experience at Animal Control last November.

"We picked up a puppy in the pound the first day I went to Animal Control and then on my last day he was still there and I felt really sorry for him," she says. "So I advertised him on TradeMe and he got a lot of interest and he went to a lovely home in Auckland. " The idea for the Facebook page came when Faye was trying to re-home a litter of abandoned kittens, and needed a free way to advertise. Animal Homelessness Is a Community Challenge  Our relationships with the animals we keep are highly personal. 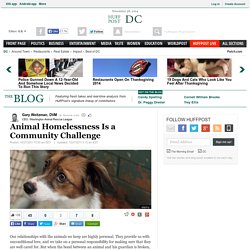 They provide us with unconditional love, and we take on a personal responsibility for making sure that they are well cared for. But when the bond between an animal and his guardian is broken, as when an animal is lost, abandoned, or surrendered to a shelter, who then has responsibility for the animal and his care? Most people would say it's the local animal shelter's responsibility. And that's true. We take on the function of caring for animals other people don't want or can't care for.

That's because we can't do this work by ourselves. In fact, just a few weekends ago we had an amazing adoption event -- a real example of community partnership. This private veterinary hospital, the largest in the nation's capital, understands the need for community involvement in animal welfare. With the help of that hospital, we made a lot of new friends and found many new homes. Teens Help Animal Shelter. Printer friendly SPARTA â€” During recessions and natural disasters animal shelters get overwhelmed with the number of animals dropped off at facilities. 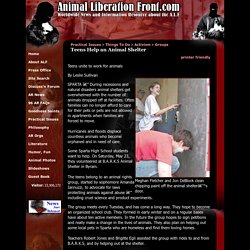 Often families can no longer afford to care for their pets or pets are not allowed in apartments when families are forced to move. Hurricanes and floods displace countless animals who become orphaned and in need of care. Some Sparta High School students want to help. On Saturday, May 23, they volunteered at B.A.R.K.S Animal Shelter in Byram. The teens belong to an animal rights group, started by sophomore Amanda Iannuzzi, to advocate for laws protecting animals against abuse â€” including cruel science and product experiments. Teen star making a difference for shelter animals - National Dogs. Lou Wegner is more than your typical teen. 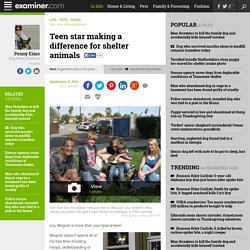 Wegner doesn't spend all of his free time shooting hoops, skateboarding or texting his friends - he has more important activities to engage in - lifesaving endeavors. This inspiring young man is a singer, actor, swordsman, and animal activist. In 2009, Wegner founded "Kids Against Animal Cruelty" - a Facebook page created as a place for kids to come together to fight for the rights of animals. Wegner wanted to reach out to other teens to let them know that millions of cats and dogs are dying inside of our nation's shelters. He wants teens to understand the importance of responsible pet ownership - especially the importance of spay/neuter.

He hopes that he can motivate teens to adopt rather than shop - teaching these young adults that wonderful, worthy pets are waiting at shelters for a home. Teens are more apt to listen to a peer - someone who isn't lecturing about "what is right". These Teens Made a Difference: Ayna Agarwal. Ayna Agarwal (left) and Patrick Pedraja and are teens making a differnce. 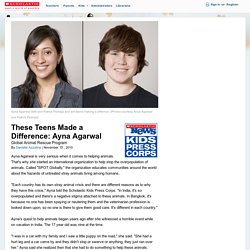 (Photos courtesy Anya Agarwal and Patrick Pedraja) Ayna Agarwal is very serious when it comes to helping animals. That's why she started an international organization to help stop the overpopulation of animals. Called "SPOT Globally," the organization educates communities around the world about the hazards of untreated stray animals living among humans. "Each country has its own stray animal crisis and there are different reasons as to why they have this crisis," Ayna told the Scholastic Kids Press Corps. Ayna's quest to help animals began years ago after she witnessed a horrible event while on vacation in India.

"I was in a car with my family and I saw a little puppy on the road," she said. At first, Ayna's efforts weren't taken seriously because she was so young. Now, her international organization is drawing lots of attention. Her biggest reward, however, has been actually making a difference. The Peace Summit. Activist Profile: Bianca V., Animal Advocate Extraordinaire. 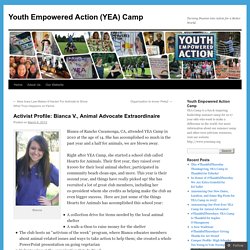 She has accomplished so much in the past year and a half for animals, we are blown away. Right after YEA Camp, she started a school club called Hearts for Animals. Their first year, they raised over $1000 for their local animal shelter, participated in community beach clean-ups, and more. Animal Shelters: another chance at life or death.

An animal shelter, by definition, is: an establishment, especially one supported by charitable contributions, that provides a temporary home for dogs, cats, and other animals that are offered for adoption. 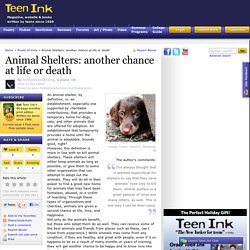 An establishment that temporarily provides a home until the animal is adoptable. Sounds good, right? However, this definition is more in line with no kill animal shelters. These shelters will either keep animals as long as possible, or give them to some other organization that can attempt to adopt out the animals.

They will do all in their power to find a great new home for animals that may have been homeless, abused, or a victim of hoarding.