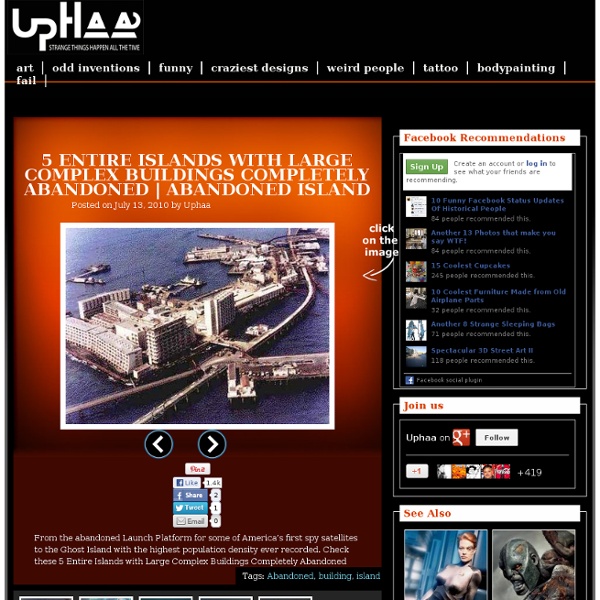 Abandoned Places Houses Gone Wild We think of feral dogs as dangerous, foreboding and to-be-avoid – but wild houses have a strange allure despite (or likely because) they are abandoned abodes, deserted homes gone from domestic spaces slowly back to nature. As photographer James D Griffioen muses, the Latin root refers both to while beasts but also to something that belongs to the dead, gone back to the Earth. Some of his shots capture this process at an incredibly late stage, such as the house above which is entirely camouflaged by the greenery that has grown to cover it – only discernible because the branches and vines conform to the shape of the structure. Others photos catch the domestic devolution at intermediate stages, snapshots of partial overgrowth where there is still some strange balance of building and nature – one could almost imagine someone still occupying this structure and simply never leaving it.

Abandoned Mega-Machines | Mega-machines are quite simply the largest man-made mechanical objects ever built, designed to carry out tasks that even a century ago would have seemed like fantasy. From ferrying hundreds or thousands of passengers and cargo by air and sea, clearing thousands of tons of earth with apparent ease, or transporting vast payloads bound for space, mega-machines have redefined the course of modern industry. But when they become surplus to requirements, removing their immense bulk swiftly from the landscape becomes a task almost as challenging as their inception. Many thus remain abandoned for years, as illustrated by these six varied examples from around the world. {*style:<b> We’ve seen mighty 747s converted into backpacker hostels and even houses , but this dejected Jumbo Jet in Namyangju-Si near Seoul, South Korea, was probably the only one to become a restaurant. {*style:<b> To many, the SS America was the most beautiful liner to fly the American flag. {*style:<b> {*style:<b> {*style:<b>

Abandoned Buildings Berlin Photo Tours Expired products still sit in the cafeteria at the abandoned Meat Factory. The glass crunches underneath my shoes with every step I take, the stairway is dimly lit by diffused daylight on this wintery day. A cold blast of air blows through the broken window sending a thin layer of snow swirling on the stairs as I continue to walk to the top level. The paint on the walls and ceiling is peeled and cracking. There is a faint smell of smoked meat that still oozes out of the building and I’m nervously aware that I’m the only one here. Every door in the hallway is open and this is about the time that some maniacal murderer in a hockey mask should be jumping out at me brandishing his pointy claws or bloody saw. Situated in old East Berlin, the Alte Fleischfabrik (Old Meat Factory) was owned by the Konsumgenossenschaft (KGB), a consumer association, and was established in 1899. The Meat Factory on a snowy, cold, dark day – fitting. Graffiti framed by destruction. More information:

eric holubow: urban exploration photographer Abandoned Six Flags Hurricane Katrina killed this clown. According to the photographer, “An abandoned Six Flags amusement park, someone spray painted ‘Six Flags 2012 coming soon’ on the wall above the downed head. But they were clownin.’ Six Flags will never rebuild here.” That’s sad, but much of New Orleans has not been restored to her former glory. This defunct amusement park on the cityâ€™s eastern edge must surely serve as a constant reminder that Katrina tried to wash them off the map. Welcome to Zombie Land kids! Chained dreams of fun at Six Flags New Orleans, abandoned Jazzland – that’s what Six Flags opened as “Jazzland” in 2000. Some photographers can see past the lifeless amusement park’s decay and desolation, showing us that there is still a chance the place could be cheery and not cheerless. Like a Bad Dream. Just in case you don’t know the scoop on what Hurricane Katrina did to New Orleans and Six Flags, this photo is of New Orleans, LA, on Sept. 14, 2005. No lines for dead rides.

Spooky Abandoned Hospitals and Asylums (PHOTOS) St. John’s Hospital, Lincolnshire, England Next Once clean and sterile, these abandoned hospitals and asylums are now portraits of urban decay, left in crumbling ruins and exposed to the elements. Some people find these places creepy, others find them beautiful, but all agree that these now-silent structures, many of them historic, have a haunting, eerie appeal. (Note: Most of these sites are on private property and may be covered by trespass laws.) More than a hundred years of history are contained in the decaying walls of St. NEXT: A hospital that treated Hitler lies in ruins Infiltration Abandoned Places: 10 Creepy, Beautiful Modern Ruins Abandoned Places: 10 Creepy, Beautiful Modern Ruins Abandoned Places | We humans are explorers by nature. The quest for discovery, both old and new, is part of what separates us from rest of the animal kingdom. Abandoned Submarine Base, Ukraine In a bay on the northern shores of the Black Sea, the Soviet army maintained an elaborate submarine base throughout much of the Cold War. Abandoned Submarine Base Gallery The Ruins of Detroit by Marchand and Meffre In the United States, few cities have felt the burn of urban decay more than Detroit. Ruins of Detroit Gallery Beelitz Military Hospital, Berlin It is rare that a ruin like this should decay so gracefully and without the marks of vandalism. Beelitz Military Hospital Gallery City Hall Subway Station, NYC Under the busy streets of New York City rests a perfectly preserved monument to that city’s transportation history. City Hall Subway Station Gallery Ryugyung Hotel, Pyongyang, North Korea Ryugyung Hotel Gallery Pripyat, Ukraine Gallery

The Strange History of the Sunflower You may not think that there is much to know about the sunflower. After all, the plant is virtually everywhere. Yet it has something more than a simple, straightforward history and is more of a globe trotter than you may imagine. Its story has the historical and continental sweep of a Hollywood epic, from the pre-European Americas to Tsarist Russia and back again. Sunflowers originate from North America but would travel to the Old World and back – and back again - in their centuries old journey to become the plant we know today. It has been suggested that the sunflower was even domesticated before corn. Yet no one would have guessed what the future of the sunflower held – and the travels it would endure. As today, the sunflower seed was cracked and snacked on - something you can eat between meals without ruining your appetite - albeit a much healthier snack than many we eat today. Russia was awash with the giant flowers, growing over two million acres a year. That’s right.