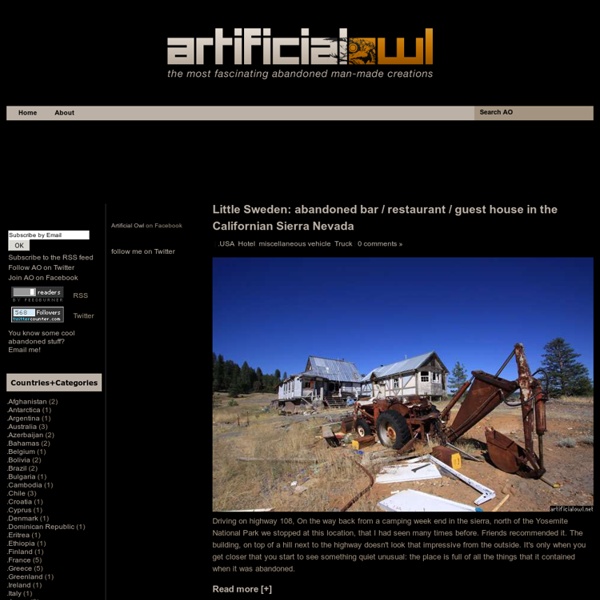 Oranjemund, Namibia. It seems to be the largest diamond mine vehicle graveyard, and yet there are barely any pictures of it. Satellite photos of the area could let you guess how big it is. The mine owned by De Beers is reputed to have the largest private earthmoving fleet in the world. From the texts I have found here and there, my understanding is that that people are not allowed to visit those the area for safety reasons, hence the lack of available photos. This tank was last used in industry, not war; after World War II, the diamond miners of Oranjemund used surplus tanks to bulldoze sand.

Comic Book Style Graphic Design  We have often been asked the process by which we create our illustrated flyers and posters. I will try to give you a clear tutorial on how we create our illustrations and turn them into flyers or posters. Our end product will be this flyer which was created for our recent Go Media Inc. art show: Before I go into an insane amount of details I want to give you a quick snap-shot of the process: Draw with Pencil on Paper.Ink your penciled artwork.Scan your artwork at 300 dpi.Create a second copy of the artwork at 150 dpi.Create a color layer just under the artwork (set your artwork layer to multiply)Color your artwork.Delete the artwork layer, and return the color layer to 300dpiOpen the original 300dpi artwork and paste it above the color layer.Flatten the image and save it.Import the image into your design softwareAdd text and graphicsExport the final design.

Inventors, Innovators, Innovations, Inventions Past Present and Future CBS asks for more money from a declining Time-Warner Cable, while customers can get it nearly free online or via an antenna. Before Google Glass' latest patch, a picture could have been worth a thousand hacks. It might be the technology of the future — but not of the present, judging by the simplistic and surprisingly expensive items offered so far. Bigger isn't always better. Two roboticists weigh in on just what it would take to make a giant robot—and why humanity should probably look elsewhere for defense against alien invaders. A new exhibit at the Design Museum in London features 3D-printing robots, carbon fiber looms, biodegradable sneakers and more.

24 Clever Print Ads In print advertising world, agencies are bound to reflect their message solely with an image and they generally count on intelligence to accomplish this. Smart ideas on great visuals attract audience’s attention easily and they become a kind of art in the end. Here are some of the latest creations, each of which are virtual proof of what we’ve stated so far. MATERIAL WORLD (in progress) : Photography by David Welch Material World takes influence from the Marxist concept “Objectification”. This concept marks a transformative relationship between humankind and nature where individuals manifest their activities into materially existing forms. To Marx, these forms serve as mirrors for self-understanding through contemplation and reflection, progressive steps towards our enhanced capacity as human beings.

3D Character Model Resource 3DSMax Maya XSI Lightwave Character Model Sets ES3DStudio's unrivalled library of high-detail/low-impact characters are ready to fit into your projects. If it's for interactive simulations, games, training aids, military visualizations, or high-detail pre-rendered animations we have what you need pre-rigged and animated in Character Studio. We are your project's head start.

Fun With Words > The Wordplay Web Site The Book Surgeon (15 pieces) Using knives, tweezers and surgical tools, Brian Dettmer carves one page at a time. Nothing inside the out-of-date encyclopedias, medical journals, illustration books, or dictionaries is relocated or implanted, only removed. Dettmer manipulates the pages and spines to form the shape of his sculptures. He also folds, bends, rolls, and stacks multiple books to create completely original sculptural forms. "My work is a collaboration with the existing material and its past creators and the completed pieces expose new relationships of the book’s internal elements exactly where they have been since their original conception," he says.

PIETER HUGO - Photographer Defunct Fashion #sketching and watching #TheGreatGatsby. Perfect way to spend a #rain filled #Saturday. Finding my #creativity again. Court Dress | c. 1860-65 The combination of court dress and the 1860s crinoline makes for a most splendid garment. Dress worn to court was the most elaborate and expensive ensemble in a lady’s wardrobe. Retro Futurism Retro Futurism Frank R. Paul was an illustrator of US pulp magazines in the science fiction field. He was born in Vienna, Austria… Frank R. Paul was influential in defining what both cover art and interior illustrations in the nascent science fiction pulps of the 1920s looked like.

Urban Explorer and Photographer Dan Marbaix Takes Stunning Photographs of Abandoned Buildings Photographer Dan Marbaix is what is known as an "urban explorer." He travels from city to city, exploring abandoned houses, asylums, churches, state buildings and much, much more. He has been arrested over 20 times for his trespassing - and even held at gunpoint - but he refuses to give up his search for things that exist outside of the mundane. You'll see why. Dan wasn't supposed to be in ANY of these places, but you'll be glad he was. Above is an abandoned house in Germany.

The 33 Most Beautiful Abandoned Places In The World ×Imgur needs your help to win the Webby Award for best social entertainment site! browse your computer drag and drop here Abandoned Suitcases Reveal Private Lives of Insane Asylum Patients If you were committed to a psychiatric institution, unsure if you’d ever return to the life you knew before, what would you take with you? That sobering question hovers like an apparition over each of the Willard Asylum suitcases. From the 1910s through the 1960s, many patients at the Willard Asylum for the Chronic Insane left suitcases behind when they passed away, with nobody to claim them.