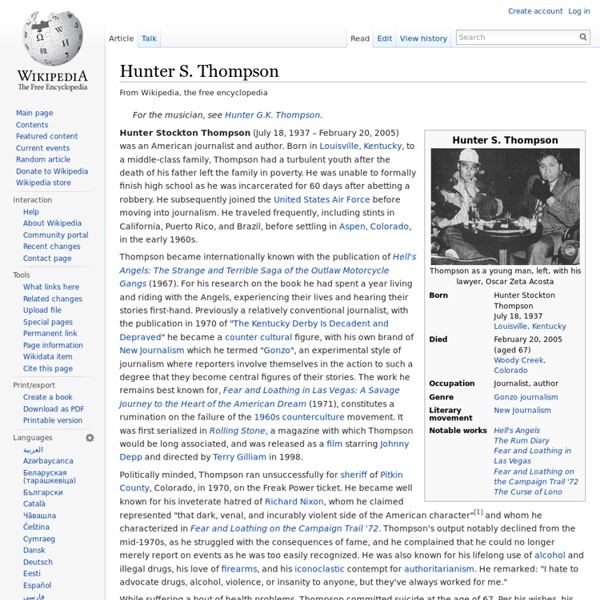 Hunter Stockton Thompson (July 18, 1937 – February 20, 2005) was an American journalist and author. Born in Louisville, Kentucky, to a middle-class family, Thompson had a turbulent youth after the death of his father left the family in poverty. He was unable to formally finish high school as he was incarcerated for 60 days after abetting a robbery. He subsequently joined the United States Air Force before moving into journalism. He traveled frequently, including stints in California, Puerto Rico, and Brazil, before settling in Aspen, Colorado, in the early 1960s. Politically minded, Thompson ran unsuccessfully for sheriff of Pitkin County, Colorado, in 1970, on the Freak Power ticket. While suffering a bout of health problems, Thompson committed suicide at the age of 67. Early life[edit] Education[edit] Interested in sports and athletically inclined from a young age, Thompson co-founded the Hawks Athletic Club while attending I. Military service[edit] Early journalism career[edit] "...

Moonchild Moonchild or Moon child may refer to: Film[edit] Music[edit] Artists[edit] Albums[edit] Songs[edit] List of works by Aleister Crowley Wikipedia list article Libri[edit] Many of the important works of Aleister Crowley are in the form of Libri (lit. "books"), which are usually short documents consisting of core teachings, methodologies, practices, or Thelemic scripture.

Moon Child Illsutrated : Aleister Crowley : 9798556695863 We use cookies to give you the best possible experience. By using our website you agree to our use of cookies. Share Moonchild is a novel written by the British occultist Aleister Crowley in 1917. Joe Heaney Irish traditional singer Musical artist Joe Heaney (AKA Joe Éinniú; Irish: Seosamh Ó hÉanaí) (1 October 1919[1] – 1 May 1984) was an Irish traditional (sean nós) singer from County Galway, Ireland. He spent most of his adult life abroad, living in England, Scotland and New York City, in the course of which he recorded hundreds of songs. Biography[edit]

Arthur Arthur is a very common Welsh masculine given name. Its etymology is disputed, but its popularity derives from it being the name of the legendary hero King Arthur. Diminutive forms of the name include Art and Artie. A common spelling variant used in many Slavic, Romance, and Germanic languages is Artur. Etymology[edit] Make Room! Make Room! Set in a future August 1999, the novel explores trends in the proportion of world resources used by the United States and other countries compared to population growth, depicting a world where the global population is seven billion people, plagued with overcrowding, resource shortages and a crumbling infrastructure. The plot jumps from character to character, recounting the lives of people in various walks of life in New York City, population 35 million. The novel was the basis of the 1973 science fiction movie Soylent Green, although the film changed much of the plot and theme and introduced cannibalism as a solution to feeding people.[2] Plot summary[edit] Make Room!

Rubaiyat of Omar Khayyam Persian-English quatrains translations by Edward Fitzgerald Although commercially unsuccessful at first, FitzGerald's work was popularised from 1861 onward by Whitley Stokes, and the work came to be greatly admired by the Pre-Raphaelites in England. FitzGerald had a third edition printed in 1872, which increased interest in the work in the United States. By the 1880s, the book was extremely popular throughout the English-speaking world, to the extent that numerous "Omar Khayyam clubs" were formed and there was a "fin de siècle cult of the Rubaiyat".[1]

Barbara Thiering Australian historian, theologian, and Biblical exegete (1930-2015) Barbara Elizabeth Thiering (15 November 1930 – 16 November 2015) was an Australian historian, theologian, and Biblical exegete specialising in the origins of the early Christian Church.[1] In books and journal articles, she challenged Christian orthodoxy, espousing the view that new findings present alternative answers to its supernatural beliefs. Her analysis has been rejected by both New Testament scholars and scholars in Judaism. Background[edit] Born in Sydney, Australia, as Barbara Houlsby, she married Barry Thiering in the late 1940s.

The Manual Library : Free Texts : Free Download, Borrow and Streaming This is a large collection of manuals for home console games, dedicated machines for entertainment created since the 1970s. The International Tool Catalog Library includes manufacturer's and dealer's catalogs, advertisements, and related literature of tools of all trades. The emphasis is on hand tools, portable power tools, and tool-making.

Widow's Island : L A Larkin : 9781800194380 Someone knows your secret. And they're coming to find you... Stephanie Miller is an average working mom. She isn't perfect, but when her war hero husband dies and her work as a scientist puts her in news headlines, her past laid bare for all to see, she's determined to make a new life for herself and teenage daughter, Amy. But she fears it's only a matter of time before the biggest mistake of her life is revealed. As Stephanie and Amy take refuge on a remote island in Washington, it feels like they're learning how to live again. Security Degree of resistance to, or protection from, harm Security is freedom from, or resilience against, potential harm (or other unwanted coercive change) caused by others. Beneficiaries (technically referents) of security may be of persons and social groups, objects and institutions, ecosystems or any other entity or phenomenon vulnerable to unwanted change. Refugees fleeing war and insecurity in Iraq and Syria arrive at Lesbos Island, supported by Spanish volunteers, 2015