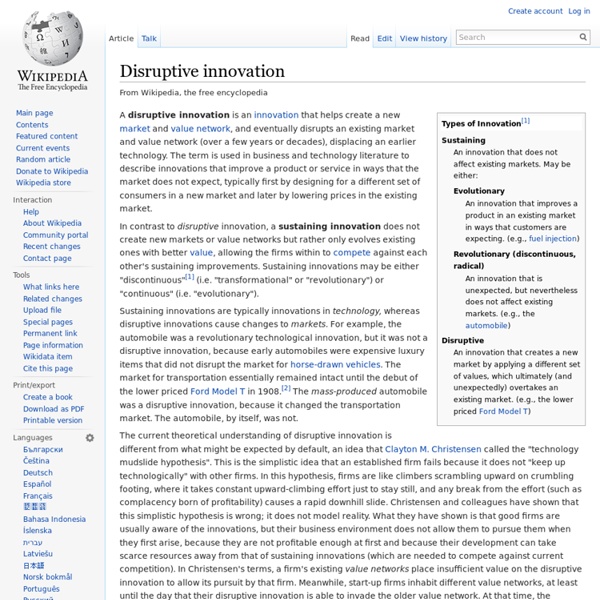 3D television An example of 3D television 3D television (3DTV) is television that conveys depth perception to the viewer by employing techniques such as stereoscopic display, multi-view display, 2D-plus-depth, or any other form of 3D display. Most modern 3D television sets use an active shutter 3D system or a polarized 3D system, and some are autostereoscopic without the need of glasses. According to DisplaySearch, 3D televisions shipments have totaled 41.45 million units in 2012, compared with 24.14 in 2011 and 2.26 in 2010.[1] History[edit] Technologies[edit]

Henry David Thoreau Henry David Thoreau (see name pronunciation; July 12, 1817 – May 6, 1862) was an American author, poet, philosopher, abolitionist, naturalist, tax resister, development critic, surveyor, and historian. A leading transcendentalist,[2] Thoreau is best known for his book Walden, a reflection upon simple living in natural surroundings, and his essay Resistance to Civil Government (also known as Civil Disobedience), an argument for disobedience to an unjust state. Thoreau's books, articles, essays, journals, and poetry total over 20 volumes. Among his lasting contributions are his writings on natural history and philosophy, where he anticipated the methods and findings of ecology and environmental history, two sources of modern-day environmentalism. Name pronunciation and physical appearance[edit]

Paradigm shift A paradigm shift (or revolutionary science) is, according to Thomas Kuhn, in his influential book The Structure of Scientific Revolutions (1962), a change in the basic assumptions, or paradigms, within the ruling theory of science. It is in contrast to his idea of normal science. According to Kuhn, "A paradigm is what members of a scientific community, and they alone, share" (The Essential Tension, 1977). Julian Assange and the Computer Conspiracy; “To destroy this invisible government” « zunguzungu ( en Español ) ( auf Deutsch ) ( in het nederlands ) The Writings of Henry D. Thoreau By Elizabeth Witherell, with Elizabeth Dubrulle When I wrote the following pages, or rather the bulk of them, I lived alone, in the woods, a mile from any neighbor, in a house which I had built myself, on the shore of Walden Pond, in Concord, Massachusetts, and earned my living by the labor of my hands only. I lived there two years and two months. (Walden, 3) With these words, Henry David Thoreau began the tale of his experiment of simple living at Walden Pond. Over the course of the next three hundred-odd pages, Thoreau outlined his philosophy of life, politics, and nature, laying the foundation for a secure place in the canon of great American writers.

‘Walden’ for the 21st century Can a man who once refused the gift of a doormat — because, as he wrote, “It’s best to avoid the beginnings of evil” — continue to inspire people in how to live simply? The answer is yes, but with stipulations, said scholar Lawrence Buell at a Harvard lecture last week (March 25). Buell, Powell M. Cabot Professor of American Literature, explored the continuing significance of Henry David Thoreau’s seminal “Walden,” the 1854 book that chronicles the author’s two-and-a-half year experiment with simple living in the woods of Concord, Mass., near Walden Pond. Internet of Things The Internet of Things (IoT) is the network of physical objects or "things" embedded with electronics, software, sensors and connectivity to enable it to achieve greater value and service by exchanging data with the manufacturer, operator and/or other connected devices. Each thing is uniquely identifiable through its embedded computing system but is able to interoperate within the existing Internet infrastructure. The term “Internet of Things” was first documented by a British visionary, Kevin Ashton, in 1999.[1] Typically, IoT is expected to offer advanced connectivity of devices, systems, and services that goes beyond machine-to-machine communications (M2M) and covers a variety of protocols, domains, and applications.[2] The interconnection of these embedded devices (including smart objects), is expected to usher in automation in nearly all fields, while also enabling advanced applications like a Smart Grid.[3] Early history[edit] In its original interpretation,[when?]

Need theory Need for achievement[edit] People who are achievement-motivated typically prefer to master a task or situation. They prefer working on tasks of moderate difficulty, prefer work in which the results are based on their effort rather than on anything else, and prefer to receive feedback on their work. Achievement based individuals tend to avoid both high risk and low risk situations. Low risk situations are seen as too easy to be valid and the high risk situations are seen as based more upon the luck of the situation rather than the achievements that individual made.[3] This personality type is motivated by accomplishment in the workplace and an employment hierarchy with promotional positions.[4] Need for affiliation[edit]

What’s the next disruptive idea for collaboration? I am indebted to a reader, Pierre-Alexandre Losson of Brussels-based Telio, who asked me a very interesting question about innovation: “In my opinion all vendors are more or less providing the same toolchain, using the same techniques. What would be in your opinion the next disruptive idea that could or should be pushed in the coming years?” Over the past decade, we have seen some different technologies come and go, and different terminologies applied (I was reminded about application service provision on Tuesday, for example – ASP is hardly mentioned now that SaaS is more widely used and understood). Some of the changes have been slow and strategic.

7 Ways To Disrupt Your Industry Massive disruption is coming, and the only question is whether your firm is going to cause it or fall victim to it. Disruption is not easy--either to create or to confront. We have no illusions about that. But in the spirit of helping established firms best serve their customers, we offer seven ways your firm could disrupt its own industry, raising the standards of customer experience and creating new opportunities for growth: 1) Totally eliminate your industry’s persistent customer pain points. 7 Ways to Outsmart Your Brain And Be More Innovative You are alive today. You were alive yesterday. You were alive the day before that.