No, no one ever lived in here :) It was p… Google Image Result. Images Website for this image Put Something Meaningful Here. 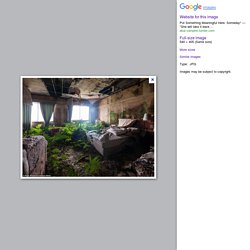 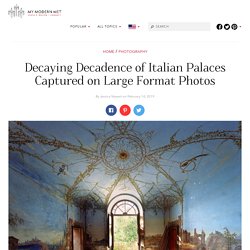 Using an analog, large format camera, Jorion immortalizes these vestiges of the past for a series he calls Veduta. Through his lens, we're given a haunting look at the former glory of these decaying palaces. Haunting Urban Decay of Abandoned Buildings Across Europe. German photographer Michael Schwan passes his time in search of abandoned spaces where he's able to document the slow decay wrought over years of neglect. 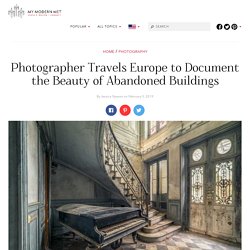 Traveling across Europe, he visits castles, villas, theaters, hotels, and universities that have been deserted and left behind. The results are a somewhat romantic look at what occurs when humans move forward, leaving their past behind. Stunning Photos Highlight the Beauty of Abandoned Churches. Some photographers take pleasure in capturing pristine environments. 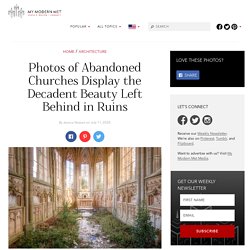 But for others, their creativity is sparked by photographing the beauty of what once was. This is particularly true for Roman Robroek, who merges his love of photography, travel, architecture, cultural heritage, and adventure by seeking out abandoned buildings. Vàíshàlí Rúmñà - This is how earth will look if human... A Compendium of Abandoned Greenhouses. 45 Times Nature Successfully Took Back What's Hers. Abandoned library with tree. (4) Facebook. Beautiful Photos of Nature in Abandoned Places Around the World. Haunting Urban Decay of Abandoned Buildings Across Europe. Nerede bilmiyorum ama şahane fotoğraf - Arkeoloji Dünyası.

Roseng.Art - * Titelbild * Abandoned.. on Pinterest. 19 Eerie Photos That Put America's Problems In Plain Sight. Seeing an abandoned home can be a bit creepy. 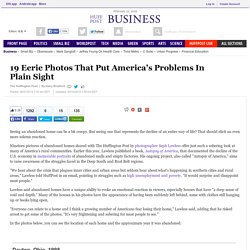 But seeing one that represents the decline of an entire way of life? That should elicit an even more solemn reaction. Nineteen pictures of abandoned homes shared with The Huffington Post by photographer Seph Lawless offer just such a sobering look at many of America's rural communities. Earlier this year, Lawless published a book, Autopsy of America, that documented the decline of the U.S. economy in memorable portraits of abandoned malls and empty factories.

His ongoing project, also called "Autopsy of America," aims to raise awareness of the struggles faced in the Deep South and Rust Belt regions. "We hear about the crisis that plagues inner cities and urban areas but seldom hear about what's happening in southern cities and rural areas," Lawless told HuffPost in an email, pointing to struggles such as high unemployment and poverty. 15 Creepiest Places on Google Street View… Huset övergavs för mer än 30 år sedan, men det fotografen hittade på insidan är makalöst. Fun City - An abandoned amusement park in Sweden. Prepare to be amazed: 30 breathtaking images of abandoned places. There are places on Earth where time seems to have stopped, almost as if certain areas are under a mysterious spell, suspended in a bubble where time has taken a pause. 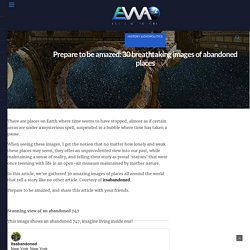 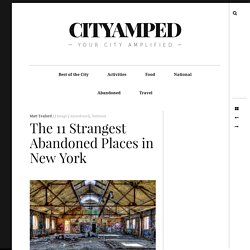 Homowack Lanes The rattling of pins at the end of the lanes has been replaced with silence, and the once freshly waxed floors are covered under a thick layer of dust. The area surrounding Homowack Lanes was once filled with bustling tourists, but now it sits uninterrupted on most days. This bowling alley is just the first stop in an area with plenty of abandoned places to explore. It’s always interesting when a tourist town comes to an end, because usually people don’t care what happens to the remains. 10. 25 Truly Stunning Shots of Abandoned Places. There are places out there in the world which human beings abandoned long ago, leaving nature to reclaim them in their entirety. 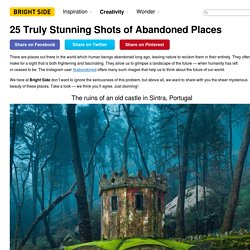 They often make for a sight that is both frightening and fascinating. They allow us to glimpse a landscape of the future — when humanity has left or ceased to be. The Instagram user itsabandoned offers many such images that help us to think about the future of our world. We here at Bright Side don’t want to ignore the seriousness of this problem, but above all, we want to share with you the sheer mysterious beauty of these places. Take a look — we think you’ll agree. Abandoned States: Places In Idyllic 1960s Postcards Have Transformed Into Scenes Of Abandonment. I found the old matchbook lying on a desk. 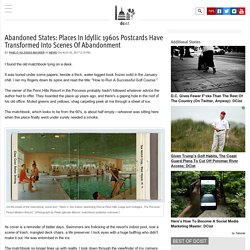 It was buried under some papers, beside a thick, water-logged book frozen solid in the January chill. I ran my fingers down its spine and read the title: "How to Run A Successful Golf Course. " The owner of the Penn Hills Resort in the Poconos probably hadn't followed whatever advice the author had to offer. They boarded the place up years ago, and there's a gaping hole in the roof of his old office. Muted greens and yellows, shag carpeting peek at me through a sheet of ice. The matchbook, which looks to be from the 60's, is about half empty—whoever was sitting here when this place finally went under surely needed a smoke. On the inside of the matchbook, some text: "Swim n' Sun Indoor Swimming Pool at Penn Hills Lodge and Cottages. Creepy Abandoned Military Sites From Around the World. The Village That Nature Reclaimed. At the mouth of the Yangtze River, on the East Coast of China, rests an old and long forgotten fishing village that is being reclaimed by the nature surrounding it. 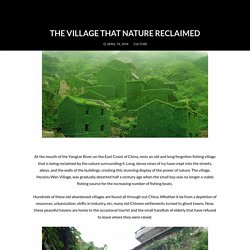 Long, dense vines of ivy have crept into the streets, alleys, and the walls of the buildings, creating this stunning display of the power of nature. The village, Houtou Wan Village, was gradually deserted half a century ago when the small bay was no longer a viable fishing source for the increasing number of fishing boats. 30 abandoned places that look truly beautiful. Skyddsrummet mitt i stan. Creepy Mansion Is Strangely Abandoned In 1976 And You Are About To See Why... Built in the thirties, this spectacular mansion definitely saw its share of grandiose affairs in its day, but sadly, its been abandoned since the seventies. Located just outside of New York City, the home is like a time capsule for a much more glamorous era — but it also happens to be full of creepy old relics as well.

Photographer Bryan Sansivero decided to document the mansion as it is now, and what he found inside is pretty haunting. It’s also an incredible property, complete with a bowling alley, indoor tennis court, library, and two bars. See the abandoned mansion in all of its spooky glory below. The mansion has 57 rooms, and looks like something out of a horror movie. 31 Haunting Images Of Abandoned Places That Will Give You Goose Bumps. The world is full of wondrous things, some consistently packed with gawking tourist and others almost entirely abandoned. Here’s a selection of some of those fascinating empty spaces, ghost towns that are rich with history and the stories of the people that used to occupy them. While most continue to rust and crumble in their neglect, all remain hauntingly beautiful. 1.

Urban Explorer and Photographer Dan Marbaix Takes Stunning Photographs of Abandoned Buildings. Photographer Dan Marbaix is what is known as an "urban explorer. " A Rich Woman Abandoned This Apartment In 1942. What They Just Found Inside Is Incredible. Madame de Florian was a French socialite and actress who fled to the south of France during World War II. She kept her apartment in Paris on the Right Bank near the Opéra Garnier, though, in case she wanted to return. Slottet övergavs efter en brand 1932. 83 år senare gör insidan en hel värld stum av beundran.