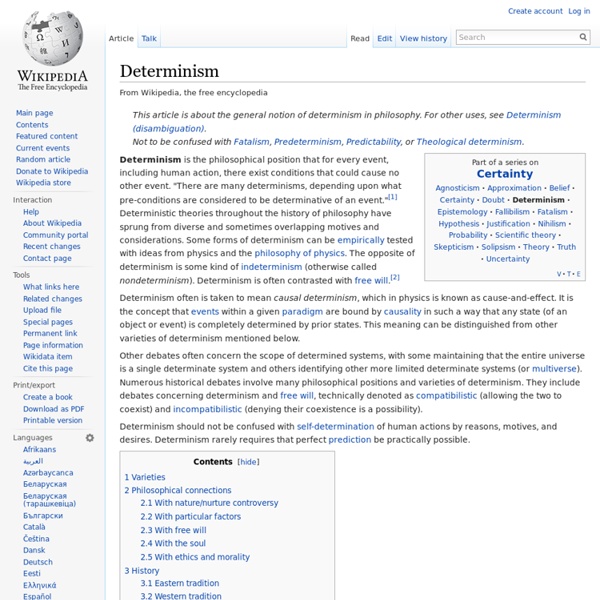 Determinism is the philosophical position that for every event, including human action, there exist conditions that could cause no other event. "There are many determinisms, depending upon what pre-conditions are considered to be determinative of an event."[1] Deterministic theories throughout the history of philosophy have sprung from diverse and sometimes overlapping motives and considerations. Some forms of determinism can be empirically tested with ideas from physics and the philosophy of physics. The opposite of determinism is some kind of indeterminism (otherwise called nondeterminism). Other debates often concern the scope of determined systems, with some maintaining that the entire universe is a single determinate system and others identifying other more limited determinate systems (or multiverse). Varieties[edit] Below appear some of the more common viewpoints meant by, or confused with "determinism". Philosophical connections[edit] With nature/nurture controversy[edit]

Nihilism Nihilism is also a characteristic that has been ascribed to time periods: for example, Jean Baudrillard and others have called postmodernity a nihilistic epoch,[4] and some Christian theologians and figures of religious authority have asserted that postmodernity[5] and many aspects of modernity[3] represent a rejection of theism, and that such rejection of their theistic doctrine entails nihilism. Forms of nihilism[edit] Nihilism has many definitions, and thus can describe philosophical positions that are arguably independent. [edit] Metaphysical nihilism is the philosophical theory that there might be no objects at all—that is, that there is a possible world where there are no objects at all—or at least that there might be no concrete objects at all—so that even if every possible world contains some objects, there is at least one that contains only abstract objects. Epistemological nihilism[edit] Mereological nihilism[edit] This interpretation of existence must be based on resolution.

Absolute space and time Absolute space and time is a concept in physics and philosophy about the properties of the universe. In physics, absolute space and time may be a preferred frame. Before Newton[edit] A version of the concept of absolute space (in the sense of a preferred frame[clarification needed]) can be seen in Aristotelian physics.[1] Robert S. Westman writes that a "whiff" of absolute space can be observed in Copernicus's classic work De revolutionibus orbium coelestium, where Copernicus uses the concept of an immobile sphere of stars.[2][clarification needed] Newton[edit] Originally introduced by Sir Isaac Newton in Philosophiæ Naturalis Principia Mathematica, the concepts of absolute time and space provided a theoretical foundation that facilitated Newtonian mechanics.[3] According to Newton, absolute time and space respectively are independent aspects of objective reality:[4] Absolute space, in its own nature, without regard to anything external, remains always similar and immovable. Einstein[edit]

German philosophy German philosophy, here taken to mean either (1) philosophy in the German language or (2) philosophy by Germans, has been extremely diverse, and central to both the analytic and continental traditions in philosophy for centuries, from Gottfried Wilhelm Leibniz through Immanuel Kant, Georg Wilhelm Friedrich Hegel, Arthur Schopenhauer, Karl Marx, Friedrich Nietzsche, Martin Heidegger and Ludwig Wittgenstein to contemporary philosophers. Søren Kierkegaard (a Danish philosopher) is frequently included in surveys of German (or Germanic) philosophy due to his extensive engagement with German thinkers.[1][2][3][4] 17th century[edit] Leibniz[edit] Leibniz Gottfried Wilhelm Leibniz (1646–1716) was both a philosopher and a mathematician who wrote primarily in Latin and French. Leibniz is noted for his optimism - his Théodicée[5] tries to justify the apparent imperfections of the world by claiming that it is optimal among all possible worlds. 18th century[edit] Wolff[edit] Kant[edit] Immanuel Kant G.

Ted Honderich Ted Honderich (born 30 January 1933) is a Canadian-born British philosopher, Grote Professor Emeritus of the Philosophy of Mind and Logic, University College London.[1] His work has been mainly about five things: consciousness and mind, including the consciousness–brain relation; right and wrong in the contemporary world particularly with democracy, terrorism and war; advocacy of the Principle of Humanity; determinism and freedom; particular problems in logical analysis and metaphysics; the supposed justification of punishment by the state; the political tradition of conservatism. He has given lectures and talks in British, continental European, Irish, American, Canadian, Asian, Russian, and African universities. Biography[edit] Honderich was born Edgar Dawn Ross Honderich on 30 January 1933 in Baden, Ontario, Canada. An undergraduate at the University of Toronto, qualifying as B.A. His papers in philosophical journals have been published in three volumes by Edinburgh University Press.

Humanism Home Center for Naturalism Applied Naturalism Spirituality Philosophy [back to Antifoundationalism] Humanism and Postmodernism: A Reconciliation (This originally appeared in the Humanist, 1993, V53, #1, pp. 18-23.) Humanism is often characterized as a secular alternative to religion in our quest for a good, moral, and self-fulfilling life. I would not want such an anti-foundationalist critique to be construed as an attack on core humanist values, since I share and want to protect these values. I don't think that I am setting up a straw man to contend that secular humanists often resort to rather simplistic appeals to reason, science, and human nature to butress their case against religion. All this is not to deny that many humanists are aware that the assumptions underlying their agenda are just that, assumptions in need of whatever further justification can be mustered. Postmodern Anti-Foundationalism Cognitive Contingency and Relativity

Absurdism Absurdism is very closely related to existentialism and nihilism and has its origins in the 19th century Danish philosopher Søren Kierkegaard, who chose to confront the crisis humans faced with the Absurd by developing existentialist philosophy.[3] Absurdism as a belief system was born of the European existentialist movement that ensued, specifically when the French Algerian philosopher and writer Albert Camus rejected certain aspects from that philosophical line of thought[4] and published his essay The Myth of Sisyphus. The aftermath of World War II provided the social environment that stimulated absurdist views and allowed for their popular development, especially in the devastated country of France. Overview[edit] "... in spite of or in defiance of the whole of existence he wills to be himself with it, to take it along, almost defying his torment. Relationship with existentialism and nihilism[edit] Related works by Søren Kierkegaard[edit] What is the Absurd? What, then, is the absurd?

Henri Poincaré French mathematician, physicist, engineer, and philosopher of science Jules Henri Poincaré (,[4] ;[5][6][7] French: [ɑ̃ʁi pwɛ̃kaʁe] ( listen);[8][9] 29 April 1854 – 17 July 1912) was a French mathematician, theoretical physicist, engineer, and philosopher of science. As a mathematician and physicist, he made many original fundamental contributions to pure and applied mathematics, mathematical physics, and celestial mechanics.[11] In his research on the three-body problem, Poincaré became the first person to discover a chaotic deterministic system which laid the foundations of modern chaos theory. Poincaré made clear the importance of paying attention to the invariance of laws of physics under different transformations, and was the first to present the Lorentz transformations in their modern symmetrical form. The Poincaré group used in physics and mathematics was named after him. Life[edit] Education[edit] First scientific achievements[edit] Career[edit] Students[edit] Death[edit] Work[edit]

Stoicism School of Hellenistic Greek philosophy Stoicism is a school of Hellenistic philosophy which was founded by Zeno of Citium, in Athens, in the early 3rd century BC. Stoicism is a philosophy of personal ethics informed by its system of logic and its views on the natural world. According to its teachings, as social beings, the path to eudaimonia (happiness) for humans is found in accepting the moment as it presents itself, by not allowing oneself to be controlled by the desire for pleasure or fear of pain, by using one's mind to understand the world and to do one's part in nature's plan, and by working together and treating others fairly and justly. Stoicism flourished throughout the Roman and Greek world until the 3rd century AD, and among its adherents was Emperor Marcus Aurelius. It experienced a decline after Christianity became the state religion in the 4th century AD. Name[edit] Stoicism was originally known as ‘Zenonism’, after the founder Zeno of Citium. Basic tenets[edit] Logic[edit]

Indeterminism Indeterminism is the concept that events (certain events, or events of certain types) are not caused, or not caused deterministically (cf. causality) by prior events. It is the opposite of determinism and related to chance. It is highly relevant to the philosophical problem of free will, particularly in the form of metaphysical libertarianism. In science, most specifically quantum theory in physics, indeterminism is the belief that no event is certain and the entire outcome of anything is a probability. Causation without determinism[edit] A number of philosophers have argued that lack of determinism does not entail absence of causation. Necessary but insufficient causation[edit] Indeterminists do not have to deny that causes exist. If x is a necessary cause of y; then the presence of y necessarily implies that x preceded it. If x is a sufficient cause of y, then the presence of x necessarily implies the presence of y. Probabilistic causation[edit] Philosophy[edit] Aristotle[edit] John D.