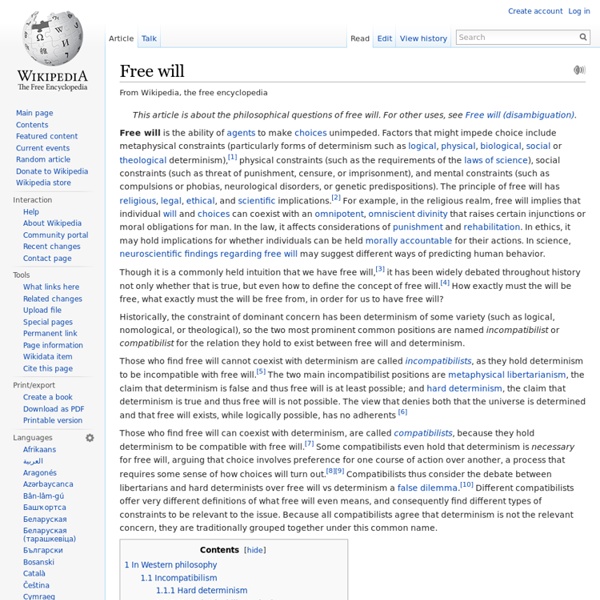 Though it is a commonly held intuition that we have free will,[3] it has been widely debated throughout history not only whether that is true, but even how to define the concept of free will.[4] How exactly must the will be free, what exactly must the will be free from, in order for us to have free will? Historically, the constraint of dominant concern has been determinism of some variety (such as logical, nomological, or theological), so the two most prominent common positions are named incompatibilist or compatibilist for the relation they hold to exist between free will and determinism. In Western philosophy[edit] The underlying issue is: Do we have some control over our actions, and if so, what sort of control, and to what extent? These questions predate the early Greek stoics (for example, Chrysippus), and some modern philosophers lament the lack of progress over all these millennia.[11][12] Below are the classic arguments bearing upon the dilemma and its underpinnings. [edit] Notes

Related:  IA • The problems with philosophy

Irvin_D American existential psychiatrist (born 1931) Irvin David Yalom (; born 13 June 1931) is an American existential psychiatrist who is emeritus professor of psychiatry at Stanford University, as well as author of both fiction and nonfiction. Early life[edit] Yalom was born in Washington, D.C.[1] About fifteen years prior to his birth in the United States, Yalom's Jewish parents emigrated from Russia (though their country of origin was Poland) and eventually opened a Washington DC grocery store. Yalom spent much of his childhood reading books in the family home above the grocery store and in a local library. After graduating from high school, he attended George Washington University and then Boston University School of Medicine.

How AI Is Helping Companies Break Silos AI is helping companies coordinate their workflows to achieve great efficiency and more synchronization. MIT SMR Frontiers This article is part of an MIT SMR initiative exploring how technology is reshaping the practice of management.

en.m.wikipedia The Unconscious God (German: Der Unbewußte Gott) is a book by Viktor E. Frankl, the Viennese psychiatrist and founder of Logotherapy. The book was the subject of his dissertation for a Ph.D. in philosophy in 1948.[1] The Unconscious God is an examination of the relation of psychology and religion. en.wikipedia Viktor Emil Frankl (26 March 1905 – 2 September 1997)[1] was an Austrian neurologist and psychiatrist as well as a Holocaust survivor, surviving Theresienstadt, Auschwitz, Kaufering and Türkheim.[2] Frankl was the founder of logotherapy (literally "healing through meaning") a meaning-centered school of psychotherapy, considered the Third Viennese School of Psychotherapy[3] following the theories developed by Sigmund Freud and Alfred Adler. Logotherapy is part of existential and humanistic psychology theories.[4] He is the author of over 39 books; he is most noted for his best-selling book Man's Search for Meaning based on his experiences in various Nazi concentration camps.[5] Early Life[edit] Professional career[edit]

en.m.wikipedia Karl Ludwig Bühler (27 May 1879 – 24 October 1963) was a German psychologist and linguist. In psychology he is known for his work in gestalt psychology, and he was one of the founders of the Würzburg School of psychology. In linguistics he is known for his organon model of communication and his treatment of deixis as a linguistic phenomenon. in.ernet.dli.2015 Donor Challenge: Help us reach our goal! To the Internet Archive Community, Time is running out: please help the Internet Archive today. The average donation is $45. If everyone chips in $5, we can keep our website independent, strong and ad-free. Max Wertheimer - Wikipedia Max Wertheimer (April 15, 1880 – October 12, 1943) was an Austro-Hungarian-born psychologist who was one of the three founders of Gestalt psychology, along with Kurt Koffka and Wolfgang Köhler. He is known for his book, Productive Thinking, and for conceiving the phi phenomenon as part of his work in Gestalt psychology. Wertheimer became interested in psychology and studied under Carl Stumpf at the University of Berlin.[1] Wertheimer then went on to obtain his PhD in 1904 under Oswald Külpe, at the University of Würzburg[1] and then began his intellectual career teaching at the Frankfurt University.

Gestalt psychology Gestalt psychology or gestaltism (German: Gestalt – "shape or form") is a theory of mind of the Berlin School. The central principle of gestalt psychology is that the mind forms a global whole with self-organizing tendencies. This principle maintains that the human mind considers objects in their entirety before, or in parallel with, perception of their individual parts; suggesting the whole is other than the sum of its parts. The Decade Tech Lost Its Way Two Silicon Valley entrepreneurs start a photo-sharing app that quickly becomes a sensation, spawning thousands of subcultures and Kardashian selfies. The first Instagram post. Kevin Systrom, co-founder: I wanted to make a massive multiplayer game, where you would check in at a location around the city — at a cafe, a bar, a park, whatever. But as I started to show it to people, it was clear that they didn’t actually want it to be a game.