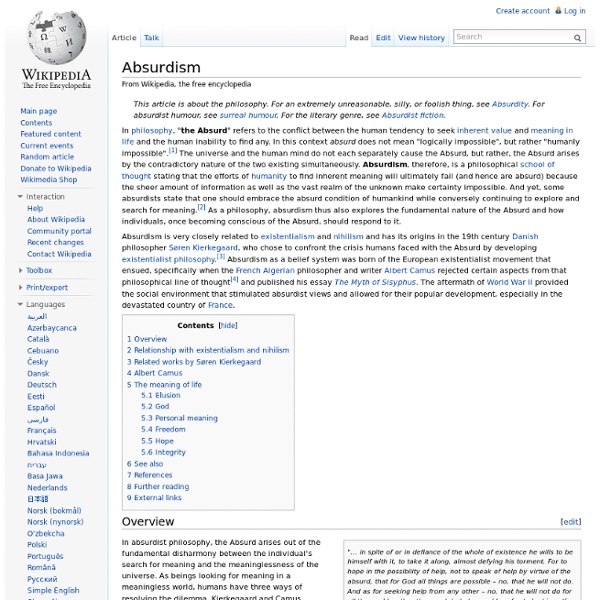 Absurdism is very closely related to existentialism and nihilism and has its origins in the 19th century Danish philosopher Søren Kierkegaard, who chose to confront the crisis humans faced with the Absurd by developing existentialist philosophy.[3] Absurdism as a belief system was born of the European existentialist movement that ensued, specifically when the French Algerian philosopher and writer Albert Camus rejected certain aspects from that philosophical line of thought[4] and published his essay The Myth of Sisyphus. The aftermath of World War II provided the social environment that stimulated absurdist views and allowed for their popular development, especially in the devastated country of France. Overview[edit] "... in spite of or in defiance of the whole of existence he wills to be himself with it, to take it along, almost defying his torment. Relationship with existentialism and nihilism[edit] Related works by Søren Kierkegaard[edit] What is the Absurd? What, then, is the absurd?

Related:  Being a Human Being, a Person, and a Man • gemoedstoestand

Multitasking Is Impossible, So Batch Tasks Instead Ah, but there's the caveat. When it comes to actually doing the tasks that require that creativity — writing, designing, saving the world — batching has its drawbacks. That's because creative ideas don't just burst forth from a never-ending fountain; at a certain point, you run dry. Gallows humor Gallows humor is humor in the face of or about very unpleasant, serious, or painful circumstances. Any humor that treats serious matters, such as death, war, disease, crime, etc., in a light, silly or satirical fashion is considered gallows humor.[1][2] Gallows humor has been described as a witticism in the face of – and in response to – a hopeless situation.[3] It arises from stressful, traumatic, or life-threatening situations, often in circumstances such that death is perceived as impending and unavoidable. Gallows humor is typically made by or about the victim of such a situation, but not the perpetrator of it.[4] Nature and functions[edit] Gallows humor has the social effect of strengthening the morale of the oppressed and undermines the morale of the oppressors.[6][7] According to Wylie Sypher, "to be able to laugh at evil and error means we have surmounted them.

Determinism Determinism is the philosophical position that for every event, including human action, there exist conditions that could cause no other event. "There are many determinisms, depending upon what pre-conditions are considered to be determinative of an event."[1] Deterministic theories throughout the history of philosophy have sprung from diverse and sometimes overlapping motives and considerations. Meaning of life Questions Questions about the meaning of life have been expressed in a broad variety of ways, including the following: What is the meaning of life?

This Trick Will Keep You From Choking Under Pressure Previous research suggests it has a lot to do with a person's perspective. In a 2012 study from those same CIT researchers, participants were more likely to choke on a hand-eye coordination challenge if they were highly loss averse — in other words, if they disliked losing money more than they enjoyed winning it. Their 2014 study found that the structure of a reward system played a major role, too, though. People were more likely to choke on the challenge if they were trying to win a large sum of money than if they were trying to avoid losing a large sum of money. (This held true even for people who were highly loss averse.)

Macabre A death head wearing the Imperial Crown of the Holy Roman Empire, on the sarcophagus of Habsburg emperor Charles VI in the crypt of the Capuchin church in Vienna, Austria. The Triumph of Death in St Maria in Bienno In works of art, macabre (US /məˈkɑːb/ mə-KAHB or UK /məˈkɑːbrə/; French: [makabʁ]) is the quality of having a grim or ghastly atmosphere. Macabre works emphasize the details and symbols of death. The term also refers to works particularly gruesome in nature. Existentialism Existentialism is a term applied to the work of certain late 19th- and 20th-century philosophers who, despite profound doctrinal differences,[1][2][3] shared the belief that philosophical thinking begins with the human subject—not merely the thinking subject, but the acting, feeling, living human individual.[4] In existentialism, the individual's starting point is characterized by what has been called "the existential attitude", or a sense of disorientation and confusion in the face of an apparently meaningless or absurd world.[5] Many existentialists have also regarded traditional systematic or academic philosophies, in both style and content, as too abstract and remote from concrete human experience.[6][7] Definitional issues and background[edit] There has never been general agreement on the definition of existentialism.

Nihilism Nihilism is also a characteristic that has been ascribed to time periods: for example, Jean Baudrillard and others have called postmodernity a nihilistic epoch,[4] and some Christian theologians and figures of religious authority have asserted that postmodernity[5] and many aspects of modernity[3] represent a rejection of theism, and that such rejection of their theistic doctrine entails nihilism. Forms of nihilism[edit] Nihilism has many definitions, and thus can describe philosophical positions that are arguably independent. [edit] Metaphysical nihilism is the philosophical theory that there might be no objects at all—that is, that there is a possible world where there are no objects at all—or at least that there might be no concrete objects at all—so that even if every possible world contains some objects, there is at least one that contains only abstract objects. Epistemological nihilism[edit]

More Tragic Reasons Why You Shouldn’t Punish Your Kids! Authoritarian parenting is all about authority and the use of power to make children listen and follow the rules and guidelines that these parents set for them. What does this type of parenting teach kids, if not the idea that the use of brute force and authority solves all life problems, instills fear in people, and makes them listen to you? This is never ok. The more you punish your kids and tell them that they should either obey you or suffer the consequences, the more they will hate you for it, lose their self-esteem because their feelings and opinions aren’t respected, and then start to believe that aggressiveness, if not violence, is the key in life. Your kids might end up doing this to other people, including their own children in the future.

Black comedy A black comedy (or dark comedy) is a comic work that makes light of serious, disturbing and/or taboo subject matter. Black comedy corresponds to the earlier concept of gallows humor.[1][2][3][4][5][6] Black comedy is often controversial due to its subject matter. History and etymology[edit] Origin of the term[edit] Breton coined the term for his book Anthology of Black Humor (Anthologie de l'humour noir), in which he credited Jonathan Swift as the originator of black humor and gallows humor, and included excerpts from 45 other writers. Breton included both examples in which the wit arises from a victim with which the audience empathizes, as is more typical in the tradition of gallows humor, and examples in which the comedy is used to mock the victim.

Naturalism (philosophy) Naturalism is "the idea or belief that only natural (as opposed to supernatural or spiritual) laws and forces operate in the world; (occas.) the idea or belief that nothing exists beyond the natural world."[1] Adherents of naturalism (i.e., naturalists) assert that natural laws are the rules that govern the structure and behavior of the natural universe, that the changing universe at every stage is a product of these laws.[2] "Naturalism can intuitively be separated into a [metaphysical] and a methodological component.

Deconstruction Deconstruction (French: déconstruction) is a form of philosophical and literary analysis derived principally from Jacques Derrida's 1967 work Of Grammatology.[1] In the 1980s it designated more loosely a range of theoretical enterprises in diverse areas of the humanities and social sciences, including—in addition to philosophy and literature—law,[2][3][4] anthropology,[5] historiography,[6] linguistics,[7] sociolinguistics,[8] psychoanalysis, political theory, feminism, and gay and lesbian studies. Deconstruction still has a major influence in the academe of Continental Europe and South America where Continental philosophy is predominant, particularly in debates around ontology, epistemology, ethics, aesthetics, hermeneutics, and the philosophy of language. It also influenced architecture (in the form of deconstructivism), music,[9] art,[10] and art criticism.[11] Etymology[edit] On deconstruction[edit]