The Problem of Perception 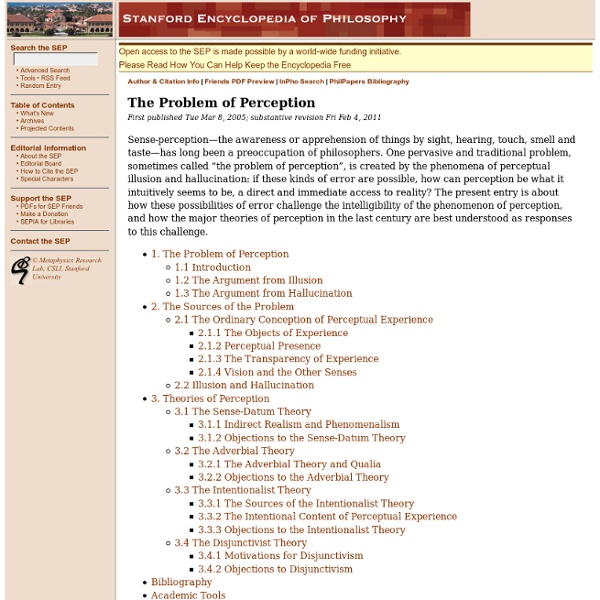 First published Tue Mar 8, 2005; substantive revision Fri Feb 4, 2011 Sense-perception—the awareness or apprehension of things by sight, hearing, touch, smell and taste—has long been a preoccupation of philosophers. One pervasive and traditional problem, sometimes called “the problem of perception”, is created by the phenomena of perceptual illusion and hallucination: if these kinds of error are possible, how can perception be what it intuitively seems to be, a direct and immediate access to reality? 1. 1.1 Introduction This entry will focus on a single, central problem of perception: how to reconcile some apparently obvious truths about our experience of the world with the possibility of certain kinds of perceptual error. This problem is not the same as the epistemological problem of how perception can give us knowledge of the external world (see the entry on epistemological problems of perception). 1.2 The Argument from Illusion An illusion here may be defined, with A.D. 2.

Psychology Wiki ParadigmOfComplexity The last few decades have seen the emergence of a growing body of literature devoted to a critique of the so-called “old” or “Cartesian-Newtonian” paradigm which, in the wake of the prodigious successes of modern natural science, came to dominate the full range of authoritative intellectual discourse and its associated worldviews. Often coupled with a materialistic, and indeed atomistic, metaphysics, this paradigm has been guided by the methodological principle of reductionism. The critics of reductionism have tended to promote various forms of holism, a term which, perhaps more than any other, has served as the rallying cry for those who see themselves as creators of a “new paradigm.” At the forefront of such a challenge, and in many ways the herald of the new paradigm, is the relatively new movement of transpersonal psychology. In taking seriously such experiences, transpersonal theory has been compelled to transcend the disciplinary boundaries of mainstream psychology. C.

Brain research shows psychopathic criminals do not lack empathy, but fail to use it automatically Criminal psychopathy can be both repulsive and fascinating, as illustrated by the vast number of books and movies inspired by this topic. Offenders diagnosed with psychopathy pose a significant threat to society, because they are more likely to harm other individuals and to do so again after being released. A brain imaging study in the Netherlands shows individuals with psychopathy have reduced empathy while witnessing the pains of others. When asked to empathize, however, they can activate their empathy. This could explain why psychopathic individuals can be callous and socially cunning at the same time. Why are psychopathic individuals more likely to hurt others? The Dutch judicial system, however, seems to be an exception. Next, the participants watched the same clips again. "In the third and final part, we performed similar hand interactions with the participants themselves, while they were lying in the scanner, having their brain activity measured", adds Meffert.

Study identifies brain circuits involved in learning and decision making (Medical Xpress)—Research from the National Institutes of Health has identified neural circuits in mice that are involved in the ability to learn and alter behaviors. The findings help to explain the brain processes that govern choice and the ability to adapt behavior based on the end results. Researchers think this might provide insight into patterns of compulsive behavior such as alcoholism and other addictions. "Much remains to be understood about exactly how the brain strikes the balance between learning a behavioral response that is consistently rewarded, versus retaining the flexibility to switch to a new, better response," said Kenneth R. The study, published online in Nature Neuroscience, indicates that specific circuits in the forebrain play a critical role in choice and adaptive learning. Like other addictions, alcoholism is a disease in which voluntary control of behavior progressively diminishes and unwanted actions eventually become compulsive.

New ADHD findings A combination of rare and common genetic variations could play a part in biological pathways linked to Attention Deficit Hyperactivity Disorder (ADHD). Cardiff University scientists revealed last year that children with the condition, like those with autism, were more likely than unaffected individuals to carry duplicated or omitted small DNA segments known as copy number variants (CNVs). The findings suggested that rare genetic variations contribute to ADHD risk. Now a wider study by the same team and colleagues in Eire and Scotland has replicated the initial findings that these large, rare CNVs are more common in children with ADHD than amongst the general population. Attention Deficit Hyperactivity Disorder is characterised by extreme restlessness, fidgetiness, concentration problems and impulsiveness leading to social and educational difficulties. The team also examined more common SNP variants and found there was no significant difference between children with or without ADHD.