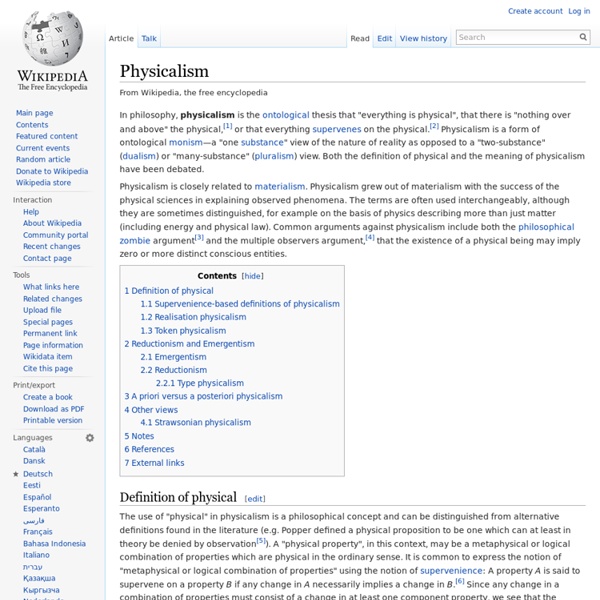 Physicalism is closely related to materialism. Physicalism grew out of materialism with the success of the physical sciences in explaining observed phenomena. The terms are often used interchangeably, although they are sometimes distinguished, for example on the basis of physics describing more than just matter (including energy and physical law). Definition of physical[edit] The use of "physical" in physicalism is a philosophical concept and can be distinguished from alternative definitions found in the literature (e.g. From the notion of supervenience, we see that, assuming that mental, social, and biological properties supervene on physical properties, it follows that two hypothetical worlds cannot be identical in their physical properties but differ in their mental, social or biological properties.[2] Two common approaches to defining "physicalism" are the theory-based and object-based approaches. Supervenience-based definitions of physicalism[edit] Realisation physicalism[edit]

“The Precession of Simulacra” by Jean Baudrillard, Translated from English into American | Carney | continent. continent. 2.2 (2012): 99–135 Originally appeared in Baudrillard’s Simulations and Simulacra, 1981. This adaptation is based on an English translation by Paul Foss and Paul Patton. What a cutie Precession of Simulacra You think you understand the fucking real, man? “The simulacrum is never that which conceals the truth—it is the truth which conceals that there is none. BOOM. Is that too much to handle? Lez get started. The best story ever told about simulation is by this guy Jorge Luis Borges—an Argentine with a taste for blood and liberalism in general. In today’s world, the idea of something being abstract has nothing to do with it being a copy of something else or like a mirror of it. Fuck The Matrix. You know what? So now that we’re in this space where nothing is real, simulation begins by murdering the shit out of anything that references the real world. The Holy Image Doesn't Mean Shit Anymore Let me toss an idea at you... To “simulate” is to pretend to have what you don’t. OMG. 1.

Indra's net "Imagine a multidimensional spider's web in the early morning covered with dew drops. And every dew drop contains the reflection of all the other dew drops. And, in each reflected dew drop, the reflections of all the other dew drops in that reflection. And so ad infinitum. Indra's net (also called Indra's jewels or Indra's pearls, from इंद्रजाल in Sanskrit) is a metaphor used to illustrate the concepts of emptiness, dependent origination,[3] and interpenetration[4] in Buddhist philosophy. The metaphor of Indra's net was developed by the Mahayana school in the 3rd century scriptures of the Avatamsaka Sutra and later by the Huayan school between the 6th and 8th centuries. Huayan school[edit] Far away in the heavenly abode of the great god Indra, there is a wonderful net which has been hung by some cunning artificer in such a manner that it stretches out infinitely in all directions. Proto-Sāṃkhya and early Buddhism[edit] Cognition[edit] Indra[edit] Buddhism[edit] Time[edit] Atharva Veda[edit]

UNMAKEABLELOVE Simulated reality Simulated reality is the hypothesis that reality could be simulated—for example by computer simulation—to a degree indistinguishable from "true" reality. It could contain conscious minds which may or may not be fully aware that they are living inside a simulation. This is quite different from the current, technologically achievable concept of virtual reality. Virtual reality is easily distinguished from the experience of actuality; participants are never in doubt about the nature of what they experience. Simulated reality, by contrast, would be hard or impossible to separate from "true" reality. There has been much debate over this topic, ranging from philosophical discourse to practical applications in computing. Types of simulation[edit] Brain-computer interface[edit] Virtual people[edit] In a virtual-people simulation, every inhabitant is a native of the simulated world. Arguments[edit] Simulation argument[edit] 1. 2. 3. Relativity of reality[edit] Computationalism[edit] Dreaming[edit]

"Is the Cosmos a Vast Computer Simulation?" New Theory May Offer Clues If the cosmos is a numerical simulation, there ought to be clues in the spectrum of high energy cosmic rays. Now more than two thousand years since Plato suggested that our senses provide only a weak reflection of objective reality, experts believe they have solved the riddle using mathetical models known as the lattice QCD approach in an attempt to recreate - on a theoretical level - a simulated reality. Lattice QCD is a complex approach that that looks at how particles known as quarks and gluons relate in three dimensions. "We consider ourselves on some level universe simulators because we calculate the interactions of particles by basically replacing space and time by a grid and putting it in a box," said Beane. "In doing that we face lots of problems for instance the box and the grid size breaks Einstein's special theory of relativity so we know how to fix this in order to get physical predictions that are meaningful." Image credit: With thanks to Rex Features

Physics News :: Earth's mantle helps hunt for fifth force of nature Interactions NASAElectrons' spin may give rise to a force that allows particles to interact over very long distances. In general, people tend to use the phrase "force of nature" loosely, as in "she's a real force of nature." But physicists are pickier--they reserve the phrase for just four separate, universal forces they call the "fundamental forces": gravity, electro-magnetism, and the strong and weak nuclear forces, which hold the nucleus together and are involved with radioactive decay, respectively. That doesn't mean physicists rule out the possibility that other forces exist. Scientists search for the 'unparticle' The long-sought Higgs boson particle seems finally to have been found at an accelerator in Geneva, and scientists are now hot on the trail of another tiny piece of the universe, this one tied ...

Quantum nonlocality Quantum nonlocality is the phenomenon by which the measurements made at a microscopic level necessarily refute one or more notions (often referred to as local realism) that are regarded as intuitively true in classical mechanics. Rigorously, quantum nonlocality refers to quantum mechanical predictions of many-system measurement correlations that cannot be simulated by any local hidden variable theory. Many entangled quantum states produce such correlations when measured, as demonstrated by Bell's theorem. Experiments have generally favoured quantum mechanics as a description of nature, over local hidden variable theories.[1][2] Any physical theory that supersedes or replaces quantum theory must make similar experimental predictions and must therefore also be nonlocal in this sense; quantum nonlocality is a property of the universe that is independent of our description of nature. Example[edit] Imagine two experimentalists, Alice and Bob, situated in separate laboratories. and P(b0|A1) = or