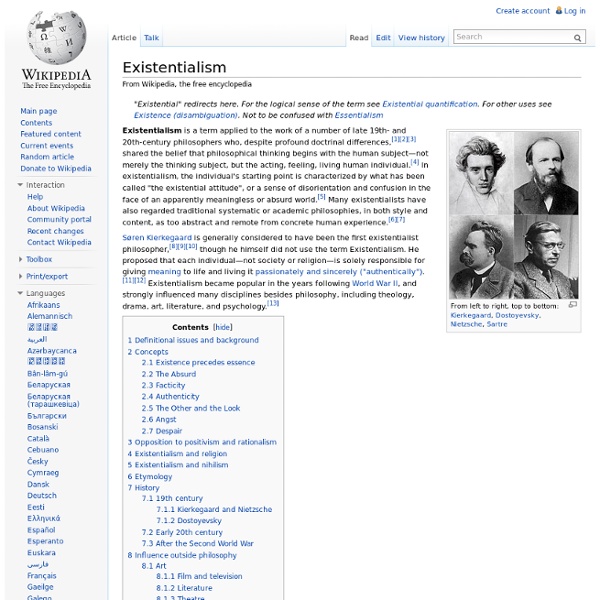 Existentialism is a term applied to the work of certain late 19th- and 20th-century philosophers who, despite profound doctrinal differences,[1][2][3] shared the belief that philosophical thinking begins with the human subject—not merely the thinking subject, but the acting, feeling, living human individual.[4] In existentialism, the individual's starting point is characterized by what has been called "the existential attitude", or a sense of disorientation and confusion in the face of an apparently meaningless or absurd world.[5] Many existentialists have also regarded traditional systematic or academic philosophies, in both style and content, as too abstract and remote from concrete human experience.[6][7] Definitional issues and background[edit] There has never been general agreement on the definition of existentialism. The term is often seen as an historical convenience as it was first applied to many philosophers in hindsight, long after they had died. Concepts[edit] The Absurd[edit]

Related:  Filosofia • The problems with philosophy

Higher-order logic The term "higher-order logic", abbreviated as HOL, is commonly used to mean higher-order simple predicate logic. Here "simple" indicates that the underlying type theory is simple, not polymorphic or dependent.[1] Quantification scope[edit] First-order logic quantifies only variables that range over individuals; second-order logic, in addition, also quantifies over sets; third-order logic also quantifies over sets of sets, and so on. Higher-order logic is the union of first-, second-, third-, …, nth-order logic; i.e., higher-order logic admits quantification over sets that are nested arbitrarily deeply. Semantics[edit] 'Aesthetics' "Aesthetician" redirects here. For a cosmetologist who specializes in the study of skin care, see Esthetician. More specific aesthetic theory, often with practical implications, relating to a particular branch of the arts is divided into areas of aesthetics such as art theory, literary theory, film theory and music theory. An example from art theory is aesthetic theory as a set of principles underlying the work of a particular artist or artistic movement: such as the Cubist aesthetic.[6] Etymology[edit]

Relation (history of concept) The concept of relation has a long and complicated history in philosophy. For the ancient Greeks the relation between one thing and another was just one of many ways in which any particular thing could be described. An interest was also developing at the time in the difference between the relations and the things themselves culminating in one view that the things in themselves cannot be known except through their relations. The debate continues into modern philosophy with further investigation into types of relation and whether relations exist only in the mind or the real world or both. An understanding of types of relation is important to an understanding of relations between many things including that between people, communities and the wider world. Most of these are complex relations but of the simpler, analytical relations out of which they are formed there are generally held to be three types, although opinion on the number may differ.

Existential therapy Background[edit] The starting point of existential philosophy (see Warnock, 1970; Macquarrie, 1972; Mace, 1999; Van Deurzen and Kenward, 2005) can be traced back to the nineteenth century and the work of Søren Kierkegaard and Friedrich Nietzsche. Both were in conflict with the predominant ideologies of their time and committed to the exploration of reality as it can be experienced in a passionate and personal manner. Kierkegaard (1813–55) protested vigorously against popular misunderstanding and abuse of Christian dogma and the so-called 'objectivity' of science (Kierkegaard, 1841, 1844). He thought that both were ways of avoiding the anxiety inherent in human existence. He had great contempt for the way in which life was being lived by those around him and believed that truth could ultimately only be discovered subjectively by the individual in action.

Model theory This article is about the mathematical discipline. For the informal notion in other parts of mathematics and science, see Mathematical model. Model theory recognises and is intimately concerned with a duality: It examines semantical elements (meaning and truth) by means of syntactical elements (formulas and proofs) of a corresponding language. To quote the first page of Chang and Keisler (1990):[1] universal algebra + logic = model theory.

'Consequentialism' Consequentialism is usually distinguished from deontological ethics (or deontology), in that deontology derives the rightness or wrongness of one's conduct from the character of the behaviour itself rather than the outcomes of the conduct. It is also distinguished from virtue ethics, which focuses on the character of the agent rather than on the nature or consequences of the act (or omission) itself, and pragmatic ethics which treats morality like science: advancing socially over the course of many lifetimes, such that any moral criterion is subject to revision. Consequentialist theories differ in how they define moral goods. Determinism Determinism is the philosophical position that for every event, including human action, there exist conditions that could cause no other event. "There are many determinisms, depending upon what pre-conditions are considered to be determinative of an event.

Property (philosophy) Daniel Dennett distinguishes between lovely properties (such as loveliness itself), which, although they require an observer to be recognised, exist latently in perceivable objects; and suspect properties which have no existence at all until attributed by an observer (such as being a suspect in a murder enquiry)[3] Property dualism: the exemplification of two kinds of property by one kind of substance Property dualism describes a category of positions in the philosophy of mind which hold that, although the world is constituted of just one kind of substance—the physical kind—there exist two distinct kinds of properties: physical properties and mental properties.

Humanistic psychology Humanistic psychology is a psychological perspective which rose to prominence in the mid-20th century in response to the limitations of Sigmund Freud's psychoanalytic theory and B.F. Skinner's behaviorism.[1] With its roots running from Socrates through the Renaissance, this approach emphasizes individuals inherent drive towards self-actualization and creativity. It typically holds that people are inherently good. It adopts a holistic approach to human existence and pays special attention to such phenomena as creativity, free will, and human potential. It encourages viewing ourselves as a "whole person" greater than the sum of our parts and encourages self exploration rather than the study of behavior in other people. Humanistic psychology acknowledges spiritual aspiration as an integral part of the human psyche.

Structure The structure of a DNA molecule is essential to its function. Load-bearing[edit] A traditional Sami food storage structure Gothic quadripartite cross-ribbed vaults of the Saint-Séverin church in Paris Buildings, aircraft, skeletons, anthills, beaver dams and salt domes are all examples of load-bearing structures. The results of construction are divided into buildings and non-building structures, and make up the infrastructure of a human society.

'Axiology' History[edit] Between the 5th and 6th century B.C., it was important in Greece to be knowledgeable if you were to be successful. Philosophers began to recognize that differences existed between the laws and morality of society. Socrates held the belief that knowledge had a vital connection to virtue, making morality and democracy closely intertwined. Socrates' student, Plato furthered the belief by establishing virtues which should be followed by all. With the fall of the government, values became individual, causing skeptic schools of thought to flourish, ultimately shaping a pagan philosophy that is thought to have influenced and shaped Christianity.

Nihilism Nihilism is also a characteristic that has been ascribed to time periods: for example, Jean Baudrillard and others have called postmodernity a nihilistic epoch,[4] and some Christian theologians and figures of religious authority have asserted that postmodernity[5] and many aspects of modernity[3] represent a rejection of theism, and that such rejection of their theistic doctrine entails nihilism. Forms of nihilism[edit] Nihilism has many definitions, and thus can describe philosophical positions that are arguably independent. [edit] Metaphysical nihilism is the philosophical theory that there might be no objects at all—that is, that there is a possible world where there are no objects at all—or at least that there might be no concrete objects at all—so that even if every possible world contains some objects, there is at least one that contains only abstract objects.