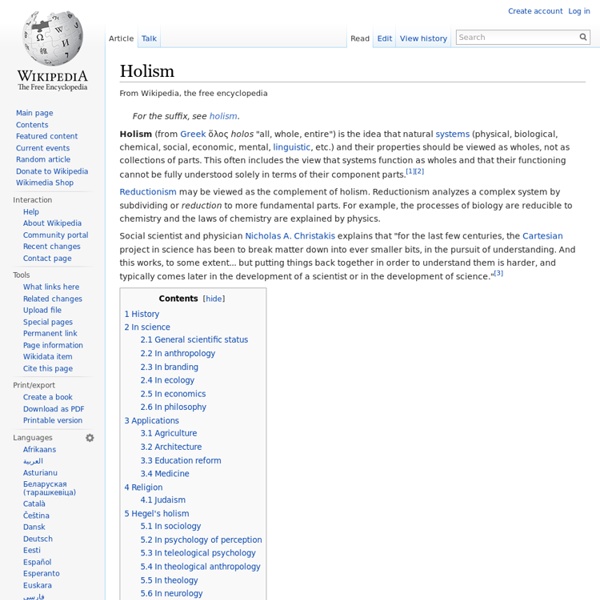 For the suffix, see holism. Holism (from Greek ὅλος holos "all, whole, entire") is the idea that natural systems (physical, biological, chemical, social, economic, mental, linguistic, etc.) and their properties should be viewed as wholes, not as collections of parts. This often includes the view that systems function as wholes and that their functioning cannot be fully understood solely in terms of their component parts.[1][2] Reductionism may be viewed as the complement of holism. Reductionism analyzes a complex system by subdividing or reduction to more fundamental parts. Social scientist and physician Nicholas A. History[edit] The term "holism" was coined in 1926 by Jan Smuts, a South African statesman, in his book Holism and Evolution.[4] Smuts defined holism as the "tendency in nature to form wholes that are greater than the sum of the parts through creative evolution".[5] The idea has ancient roots. In science[edit] General scientific status[edit] In anthropology[edit] In branding[edit] Related:  Philosophy

Spiritual ecology - Wikipedia Introduction[edit] Contributors in the field of Spiritual Ecology contend there are spiritual elements at the root of environmental issues. Those working in the arena of Spiritual Ecology further suggest that there is a critical need to recognize and address the spiritual dynamics at the root of environmental degradation.[citation needed] The field is largely emerging through three individual streams of formal study and activity: science and academia, religion and spirituality, and ecological sustainability.[1] Despite the disparate arenas of study and practice, the principles of spiritual ecology are simple: In order to resolve such environmental issues as depletion of species, global warming, and over-consumption, humanity must examine and reassess our underlying attitudes and beliefs about the earth, and our spiritual responsibilities toward the planet.[2] U.S. History[edit] During the modern age, reason became valued over faith, tradition, and revelation. Indigenous wisdom[edit]

George Lakoff George P. Lakoff (/ˈleɪkɒf/, born May 24, 1941) is an American cognitive linguist, best known for his thesis that lives of individuals are significantly influenced by the central metaphors they use to explain complex phenomena. The more general theory that elaborated his thesis is known as embodied mind. He is professor of linguistics at the University of California, Berkeley, where he has taught since 1972. Work[edit] [edit] Although some of Lakoff's research involves questions traditionally pursued by linguists, such as the conditions under which a certain linguistic construction is grammatically viable, he is most famous for his reappraisal of the role that metaphors play in socio-political lives of humans. Metaphor has been seen within the Western scientific tradition as purely a linguistic construction. He suggested that: "Our ordinary conceptual system, in terms of which we both think and act, is fundamentally metaphorical in nature." Linguistics wars[edit] Embodied mind[edit]

Hylozoism - Wikipedia Hylozoism is the philosophical point of view that matter is in some sense alive. The concept dates back at least as far as the Milesian school of pre-Socratic philosophers. The term was introduced to English by Ralph Cudworth in 1678. Distinction from similar theories[edit] Although there is a distinction between possessing a mind (hylopsychism) and possessing life (hylozoism); in practice this division is difficult to maintain, because the ancient hylozoists not only regarded the spirits of the material universe and plant world as alive, but also as more or less conscious. Ancient hylozoism[edit] In Renaissance and early Modernity[edit] In the Renaissance, Bernardino Telesio, Paracelsus, Cardanus, and Giordano Bruno revived the doctrine of hylozoism. In England, some of the Cambridge Platonists approached hylozoism as well. Spinoza's idealism also tends toward hylozoism. Contemporary hylozoism[edit] Martin Buber too takes an approach that is quasi-hylozoic. Alice A. Influenced by Alice A.

Stigmergy Kind people have stigmergically translated this article into German, French, and Spanish. This article is part of a series now incorporated into : ‘Binding Chaos’. Stigmergy is a mechanism of indirect coordination between agents or actions. The principle is that the trace left in the environment by an action stimulates the performance of a next action, by the same or a different agent. In that way, subsequent actions tend to reinforce and build on each other, leading to the spontaneous emergence of coherent, apparently systematic activity. A personality based system can never allow for mass collaboration on a global scale without representation such as that seen in organizations like the United Nations. Currently, the typical response to a situation which requires an action is to create a noun, in the form of a committee, commission, organization, corporation, ngo, government body, etc. Most systems are now run by competitive organizations. Hierarchical System Consensus Hierarchy Stigmergy

Olika trender och tips Hylomorphism - Wikipedia Hylomorphism (or hylemorphism) is a philosophical theory developed by Aristotle, which conceives being (ousia) as a compound of matter and form. The word is a 19th-century term formed from the Greek words ὕλη hyle, "wood, matter", and μορφή, morphē, "form". Matter and form[edit] Aristotle defines X's matter as "that out of which" X is made.[1] For example, letters are the matter of syllables.[2] Thus, "matter" is a relative term:[3] an object counts as matter relative to something else. For example, clay is matter relative to a brick because a brick is made of clay, whereas bricks are matter relative to a brick house. Change is analyzed as a material transformation: matter is what undergoes a change of form.[4] For example, consider a lump of bronze that's shaped into a statue. According to Aristotle's theory of perception, we perceive an object by receiving its form with our sense organs.[7] Thus, forms include complex qualia such as colors, textures, and flavors, not just shapes.[8]

Five routes to more innovative problem solving - McKinsey Quarterly - Strategy - Strategic Thinking Rob McEwen had a problem. The chairman and chief executive officer of Canadian mining group Goldcorp knew that its Red Lake site could be a money-spinner—a mine nearby was thriving—but no one could figure out where to find high-grade ore. The terrain was inaccessible, operating costs were high, and the unionized staff had already gone on strike. In short, McEwen was lumbered with a gold mine that wasn’t a gold mine. Then inspiration struck. McEwen intuitively understood the value of taking a number of different approaches simultaneously to solving difficult problems. This article presents an approach for doing just that. The flexons approach Finding innovative solutions is hard. Obviously, people do not always have think tanks of PhDs trained in various approaches at their disposal. To accommodate the world of business problems, we have identified five flexons, or problem-solving languages. Networks flexon Imagine a map of all of the people you know, ranked by their influence over you.

How the Science of Swarms Can Help Us Fight Cancer and Predict the Future | Wired Science The first thing to hit Iain Couzin when he walked into the Oxford lab where he kept his locusts was the smell, like a stale barn full of old hay. The second, third, and fourth things to hit him were locusts. The insects frequently escaped their cages and careened into the faces of scientists and lab techs. The room was hot and humid, and the constant commotion of 20,000 bugs produced a miasma of aerosolized insect exoskeleton. Many of the staff had to wear respirators to avoid developing severe allergies. “It wasn’t the easiest place to do science,” Couzin says. In the mid-2000s that lab was, however, one of the only places on earth to do the kind of science Couzin wanted. Couzin would put groups of up to 120 juveniles into a sombrero-shaped arena he called the locust accelerator, letting them walk in circles around the rim for eight hours a day while an overhead camera filmed their movements and software mapped their positions and orientations. Click to Open Overlay Gallery

Ram Dass - Wikipedia Youth and education[edit] Richard Alpert was born to a Jewish family in Newton, Massachusetts. His father, George Alpert, was a lawyer in Boston. While Alpert did have a bar mitzvah, he was "disappointed by its essential hollowness".[3] He considered himself an atheist[4] and did not profess any religion during his early life, describing himself as "inured to religion. I didn’t have one whiff of God until I took psychedelics Harvard professorship and research[edit] McClelland moved to Cambridge to teach at Harvard University, and helped Alpert accept a tenure-track position there in 1958 as an assistant clinical psychology professor.[5][7][8] Alpert worked with the Social Relations Department, the Psychology Department, the Graduate School of Education, and the Health Service, where he was a therapist. Millbrook and psychedelic counterculture (1963–1967)[edit] In 1967 Alpert gave talks at the League for Spiritual Discovery's center in Greenwich Village.[19] Be Here Now[edit] Later life[edit]

Holism is sometimes seen as being the opposite of reductionism. Reductionism argues that the way of solving a large problem is to define it as a series of smaller problems which may be solved separately and the sum of the solutions will represent the solution of the larger problem. Holism asserts that some problems are not amenable to reductionist approaches and these need to be studied or researched in a different way. A holistic orientated researcher will also argue that if a research problem is reduced to smaller problems than a simple summation of the findings of the smaller solutions may not adequately answer the greater or larger problem.