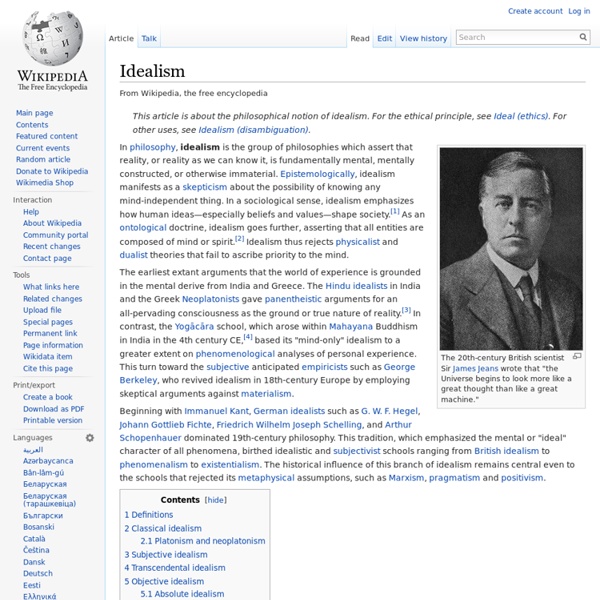 The 20th-century British scientist Sir James Jeans wrote that "the Universe begins to look more like a great thought than like a great machine." Beginning with Immanuel Kant, German idealists such as G. W. F. Definitions[edit] Any philosophy that assigns crucial importance to the ideal or spiritual realm in its account of human existence may be termed "idealist". Subjective idealists like George Berkeley are anti-realists in terms of a mind-independent world, whereas transcendental idealists like Immanuel Kant are strong skeptics of such a world, affirming epistemological and not metaphysical idealism. Classical idealism[edit] Monistic idealism holds that consciousness, not matter, is the ground of all being. Anaxagoras (480 BC) was known as "Nous" ("Mind") because he taught that "all things" were created by Mind, that Mind held the cosmos together and gave human beings a connection to the cosmos or a pathway to the divine. Many religious philosophies are specifically idealist. therefore; Related:  Part 1 - second main division of the transcentital dialectic

plato.stanford 1. Introduction The terms “idealism” and “idealist” are by no means used only within philosophy; they are used in many everyday contexts as well. Optimists who believe that, in the long run, good will prevail are often called “idealists”. This is not because such people are thought to be devoted to a philosophical doctrine but because of their outlook on life generally; indeed, they may even be pitied, or perhaps envied, for displaying a naïve worldview and not being philosophically critical at all. Even within philosophy, the terms “idealism” and “idealist” are used in different ways, which often makes their meaning dependent on the context. Within modern philosophy there are sometimes taken to be two fundamental conceptions of idealism: Idealism in sense (1) has been called “metaphysical” or “ontological idealism”, while idealism in sense (2) has been called “formal” or “epistemological idealism”. Of course these strategies can be combined by a single philosopher. 2. that but that 3. 4.

branch_idealism Introduction | History of Idealism | Subjective Idealism | Transcendental Idealism | Objective Idealism | Absolute Idealism | Other Types of Idealism Idealism is the metaphysical and epistemological doctrine that ideas or thoughts make up fundamental reality. Essentially, it is any philosophy which argues that the only thing actually knowable is consciousness (or the contents of consciousness), whereas we never can be sure that matter or anything in the outside world really exists. Idealism is a form of Monism (as opposed to Dualism or Pluralism), and stands in direct contrast to other Monist beliefs such as Physicalism and Materialism (which hold that the only thing that can be truly proven to exist is physical matter). A broad enough definition of Idealism could include many religious viewpoints, although an Idealistic viewpoint need not necessarily include God, supernatural beings, or an existence after death. Gottfried Leibniz expressed a form of Idealism known as Panpsychism. G.

Skepticism Doubtful attitude toward knowledge claims Skepticism, also spelled scepticism, is a questioning attitude or doubt toward knowledge claims that are seen as mere belief or dogma.[1][2] For example, if a person is skeptical about claims made by their government about an ongoing war then the person doubts that these claims are accurate. In such cases, skeptics normally recommend not disbelief but suspension of belief, i.e. maintaining a neutral attitude that neither affirms nor denies the claim. Philosophical skepticism is one important form of skepticism. Skepticism has been responsible for many important developments in science and philosophy. Definition and semantic field[edit] Skepticism, also spelled scepticism, (from the Greek 'σκέπτομαι' skeptomai, to search, to think about or look for) refers to a doubtful attitude toward knowledge claims.[5][6][7] So if a person is skeptical of their government's claims about an ongoing war then the person has doubts that these claims are true.

www.britannica Greek and Roman materialism Though Thales of Miletus (c. 580 bce) and some of the other pre-Socratic philosophers have some claims to being regarded as materialists, the materialist tradition in Western philosophy really begins with Leucippus and Democritus, Greek philosophers who were born in the 5th century bce. Leucippus is known only through his influence on Democritus. According to Democritus, the world consists of nothing but atoms (indivisible chunks of matter) in empty space (which he seems to have thought of as an entity in its own right). These atoms can be imperceptibly small, and they interact either by impact or by hooking together, depending on their shapes. Because Epicurus’s philosophy was expounded in a lengthy poem by Lucretius, a Roman philosopher of the 1st century bce, Epicurus (died 270 bce) was easily the most influential Greek materialist. Modern materialism The 18th-century French materialists had been reacting against orthodox Christianity.

en.m.wikipedia Space, time and causality—the necessary ways in which phenomena are related to one another—do not have an existence 'outside' of us, separate from phenomena. Rather, like the phenomena, these forms of interrelatedness are mind-dependent, i.e. originate in our mental faculties. Kant's doctrine is commonly presented as the notion that time, space, and causality are not independently existing entities, but constitute the necessary mental preconditions of experiencing the world. Background[edit] Although it influenced the course of subsequent German philosophy dramatically, exactly how to interpret this concept was a subject of some debate among 20th century philosophers. Transcendental idealism is associated with formalistic idealism on the basis of passages from Kant's Prolegomena to any Future Metaphysics, although recent research has tended to dispute this identification. Kant's transcendental idealism[edit] Kant was aware of problems with the positions of both of these thinkers. P.

Imagination Creative ability Imagination is the production or simulation of novel objects, sensations, and ideas in the mind without any immediate input of the senses. Stefan Szczelkun characterises it as the forming of experiences in one's mind, which can be re-creations of past experiences, such as vivid memories with imagined changes, or completely invented and possibly fantastic scenes.[1] Imagination helps make knowledge applicable in solving problems and is fundamental to integrating experience and the learning process.[2][3][4][5] As an approach to build theory, it is called "disciplined imagination".[6] A basic training for imagination is listening to storytelling (narrative),[2][7] in which the exactness of the chosen words is the fundamental factor to "evoke worlds".[8] One view of imagination links it with cognition,[9][10][11] seeing imagination as a cognitive process used in mental functioning. Imagination can also be expressed through stories such as fairy tales or fantasies. Books

Descartes4 Descartes' proof of the External World Let me remind you of the breathtaking follow-up to the proofs of God's existence: 'I do not see how God could be understood to be anything but a deceiver if these ideas [that sense gives us] were transmitted by a source other than corporeal things. We have explored Descartes' conception of 'mind' or 'a mind'. So from the Cogito he has the conclusion that 'mind', or 'a mind' exists. Mind or minds? Having proved to his own satisfaction that God exists, Descartes then argues that if there is a God, the ordinary things around us must also exist. Can you write in a sentence what this argument is? Overhead 402 Can you suggest objections to this argument? Overhead 403 Overhead 404 Though these objections were put to Descartes, he was unmoved by them, and maintained the conclusions he had set out. The Cogito proved the existence of mind or a mind, and the argument from that proved the existence first of God and via that of a populated external world. Overhead 9 1.

Idealism (NOTE: You must read only those linked materials that are preceded by the capitalized word READ.) This is the view that the only reality is the ideal world. This would be the world of ideas. Idealism is the metaphysical view that associates reality to ideas in the mind rather than to material objects. IDEALISM of Plato A well known exponent of this view was Plato, a philosopher in ancient Greece (428-347 B.C.). READ The ideas of Bishop Berkeley George Berkeley was an Anglican bishop from Ireland who challenged the irrationality of the notion that matter exists autonomously outside the mind as Locke and other contemporaneous empiricists speculated. Christian Science view of idealism Christian Scientists generally believe that God is a disembodied spirit who is omnipotent, omniscient, and omnipresent. Hinduism There is the Advaita Vendantin tradition in Hinduism and in it a form of Idealism. This is Berkeley's position. For an overview of IDEALISM READ Dallas Roark Chapter 10

Anthropomorphism Personification is the related attribution of human form and characteristics to abstract concepts such as nations, emotions, and natural forces, such as seasons and weather. Both have ancient roots as storytelling and artistic devices, and most cultures have traditional fables with anthropomorphized animals as characters. People have also routinely attributed human emotions and behavioural traits to wild as well as domesticated animals.[3] Etymology Anthropomorphism derives from its verb form anthropomorphize,[a] itself derived from the Greek ánthrōpos (ἄνθρωπος, lit. Examples in prehistory From the beginnings of human behavioural modernity in the Upper Paleolithic, about 40,000 years ago, examples of zoomorphic (animal-shaped) works of art occur that may represent the earliest evidence we have of anthropomorphism. This anthropomorphic art has been linked by archaeologist Steven Mithen with the emergence of more systematic hunting practices in the Upper Palaeolithic (Mithen 1998). Fables

materialism Materialism - Definitions & Doctrines Materialism can refer either to the simple preoccupation with the material world, as opposed to intellectual or spiritual concepts, or to the theory that physical matter is all there is. This theory is far more than a simple focus on material possessions. It states that everything in the universe is matter, without any true spiritual or intellectual existence. Materialism can also refer to a doctrine that material success and progress are the highest values in life. This doctrine appears to be prevalent in western society today. Materialism - Philosophies & Worldviews Materialism and its theories can be traced as far back as the poem The Nature of Things, written in the first century B.C. by Lucretius. Materialism as a philosophy is held by those who maintain that existence is explainable solely in material terms, with no accounting of spirit or consciousness. Continue Your Investigation!

www.thoughtco Idealism is important to philosophical discourse because its adherents assert that reality is actually dependent upon the mind rather than something that exists independent of the mind. Or, put another way, that the ideas and thoughts of the mind constitute the essence or fundamental nature of all reality. Extreme versions of Idealism deny that any world at all exists outside of our minds. Narrower versions of Idealism claim that our understanding of reality reflects the workings of our mind first and foremost—that the properties of objects have no standing independent of the minds perceiving them. Theistic forms of idealism limit reality to the mind of God. In any case, we cannot truly know anything for certain about whatever external world may exist; all we can know are the mental constructs created by our minds, which we can then attribute to an external world. The Meaning of the Mind Platonic Idealism Epistemological Idealism Subjective Idealism Objective Idealism Transcendental Idealism

Anthropomorphism When you talk to your dog, your computer, your teddy bear, or your car as if you were speaking to another person, you are anthropomorphizing—or attributing human characteristics like emotions and intent to a non-human entity. Anthropomorphism is a universal mental process—pretty much everyone does it—but research shows that the degree to which individuals anthropomorphize can have significant consequences in their lives. Ascribing human qualities to inanimate objects is generally associated with innocuous, often positive effects like "cuteness," humor, empowerment, and a mature sense of responsibility. Extreme examples of this type of behavior, however, are also linked to psychological issues and social concerns, such as an anxious attachment to objects that leads to hoarding, forcing wild animals to behave in unnatural ways for the sake of human entertainment, and social acceptance of androids (robots) that undermines the unique qualities and value of humans.