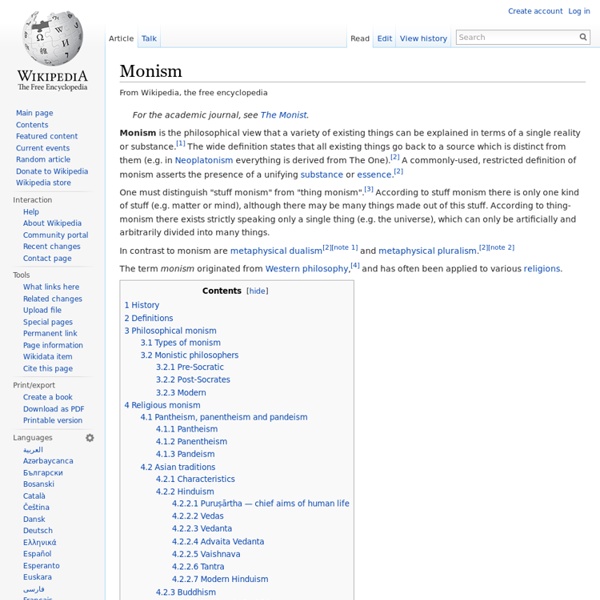 Monism is the philosophical view that a variety of existing things can be explained in terms of a single reality or substance. The wide definition states that all existing things go back to a source which is distinct from them (e.g. in Neoplatonism everything is derived from The One). A commonly-used, restricted definition of monism asserts the presence of a unifying substance or essence. One must distinguish "stuff monism" from "thing monism".[3] According to stuff monism there is only one kind of stuff (e.g. matter or mind), although there may be many things made out of this stuff. The term monism originated from Western philosophy,[4] and has often been applied to various religions. History[edit] It was later also applied to the theory of absolute identity set forth by Hegel and Schelling. According to Jonathan Schaffer, monism lost popularity due to the emergence of Analytic philosophy in the early twentieth century, which revolted against the neo-Hegelians. Definitions[edit] a. b.

Eternalism (philosophy of time) Conventionally, time is divided into three distinct regions; the "past", the "present", and the "future". Using that representational model, the past is generally seen as being immutably fixed, and the future as undefined and nebulous. As time passes, the moment that was once the present becomes part of the past; and part of the future, in turn, becomes the new present. In this way time is said to pass, with a distinct present moment "moving" forward into the future and leaving the past behind. This conventional model presents a number of difficult philosophical problems, and seems difficult to reconcile with currently accepted scientific theories such as the theory of relativity. Many philosophers have argued that relativity implies eternalism.[3] Although he disagrees in a qualified sense, philosopher of science, Dean Rickles, notes that "the consensus among philosophers seems to be that special and general relativity are incompatible with presentism The philosopher Katherin A. Notes

Analytic geometry Cartesian coordinates Analytic geometry, or analytical geometry, has two different meanings in mathematics. The modern and advanced meaning refers to the geometry of analytic varieties. This article focuses on the classical and elementary meaning. In classical mathematics, analytic geometry, also known as coordinate geometry, or Cartesian geometry, is the study of geometry using a coordinate system. This contrasts with synthetic geometry. Analytic geometry is widely used in physics and engineering, and is the foundation of most modern fields of geometry, including algebraic, differential, discrete, and computational geometry. History[edit] The eleventh century Persian mathematician Omar Khayyám saw a strong relationship between geometry and algebra, and was moving in the right direction when he helped to close the gap between numerical and geometric algebra[4] with his geometric solution of the general cubic equations,[5] but the decisive step came later with Descartes.[4] Coordinates[edit]

Calculus ratiocinator The Calculus Ratiocinator is a theoretical universal logical calculation framework, a concept described in the writings of Gottfried Leibniz, usually paired with his more frequently mentioned characteristica universalis, a universal conceptual language. Two views[edit] There are two contrasting points of view on what Leibniz meant by calculus ratiocinator. The analytic view[edit] The received point of view in analytic philosophy and formal logic, is that the calculus ratiocinator anticipates mathematical logic — an "algebra of logic".[1] The analytic point of view understands that the calculus ratiocinator is a formal inference engine or computer program which can be designed so as to grant primacy to calculations. The synthetic view[edit] A contrasting point of view stems from synthetic philosophy and fields such as cybernetics, electronic engineering and general systems theory. Notes[edit] Jump up ^ Fearnley-Sander 1982: p.164 See also[edit] References[edit] Louis Couturat, 1901.

Metric space The metric space which most closely corresponds to our intuitive understanding of space is the 3-dimensional Euclidean space. In fact, the notion of "metric" is a generalization of the Euclidean metric arising from the four long-known properties of the Euclidean distance. The Euclidean metric defines the distance between two points as the length of the straight line segment connecting them. Other metric spaces occur for example in elliptic geometry and hyperbolic geometry, where distance on a sphere measured by angle is a metric, and the hyperboloid model of hyperbolic geometry is used by special relativity as a metric space of velocities. A metric space also induces topological properties like open and closed sets which leads to the study of even more abstract topological spaces. History[edit] Maurice Fréchet introduced metric spaces in his work Sur quelques points du calcul fonctionnel, Rendic. Definition[edit] A metric space is an ordered pair where is a set and such that for any about of in

Dialectic Dialectic (also dialectics and the dialectical method) is a method of argument for resolving disagreement that has been central to European and Indian philosophy since antiquity. The word dialectic originated in ancient Greece, and was made popular by Plato in the Socratic dialogues. The dialectical method is discourse between two or more people holding different points of view about a subject, who wish to establish the truth of the matter guided by reasoned arguments.[1] The term dialectics is not synonymous with the term debate. While in theory debaters are not necessarily emotionally invested in their point of view, in practice debaters frequently display an emotional commitment that may cloud rational judgement. Debates are won through a combination of persuading the opponent; proving one's argument correct; or proving the opponent's argument incorrect. The Sophists taught aretē (Greek: ἀρετή, quality, excellence) as the highest value, and the determinant of one's actions in life.