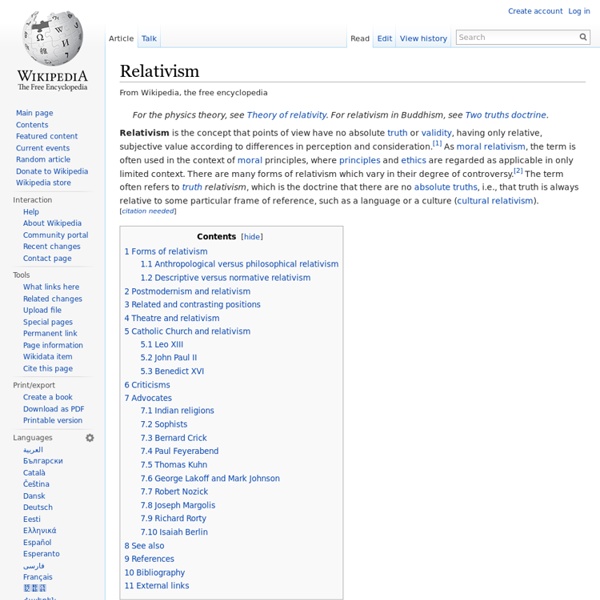 Forms of relativism[edit] Anthropological versus philosophical relativism[edit] Anthropological relativism refers to a methodological stance, in which the researcher suspends (or brackets) his or her own cultural biases while attempting to understand beliefs and behaviors in their local contexts. This has become known as methodological relativism, and concerns itself specifically with avoiding ethnocentrism or the application of one's own cultural standards to the assessment of other cultures.[3] This is also the basis of the so-called "emic" and "etic" distinction, in which: Philosophical relativism, in contrast, asserts that the truth of a proposition depends on the metaphysical, or theoretical frame, or the instrumental method, or the context in which the proposition is expressed, or on the person, groups, or culture who interpret the proposition.[4] Descriptive versus normative relativism[edit] Postmodernism and relativism[edit] Related and contrasting positions[edit] Leo XIII[edit]

Quantum indeterminacy Quantum indeterminacy is the apparent necessary incompleteness in the description of a physical system, that has become one of the characteristics of the standard description of quantum physics. Prior to quantum physics, it was thought that (a) a physical system had a determinate state which uniquely determined all the values of its measurable properties, and conversely (b) the values of its measurable properties uniquely determined the state. Albert Einstein may have been the first person to carefully point out the radical effect the new quantum physics would have on our notion of physical state.[1] Quantum indeterminacy can be quantitatively characterized by a probability distribution on the set of outcomes of measurements of an observable. Indeterminacy in measurement was not an innovation of quantum mechanics, since it had been established early on by experimentalists that errors in measurement may lead to indeterminate outcomes. Measurement[edit] Example[edit] The Pauli spin matrices A.

Open-mindedness Open-mindedness is receptiveness to new ideas. Open-mindedness relates to the way in which people approach the views and knowledge of others, and "incorporate the beliefs that others should be free to express their views and that the value of others’ knowledge should be recognized."[1][2] There are various scales for the measurement of open-mindedness.[3] It has been argued that schools should emphasize open-mindedness more than relativism in their science instruction, because the scientific community does not embrace a relativistic way of thinking.[4] Open-mindedness is generally considered an important personal attribute for effective participation in management teams and other groups.[5] According to What Makes Your Brain Happy and Why You Should Do the Opposite, closed-mindedness, or an unwillingness to consider new ideas, can result from the brain's natural dislike for ambiguity. References[edit] Jump up ^ Tjosvold, Dean; Poon, Margaret (September 1998). Further reading[edit]

monism.pdf Consciousness Representation of consciousness from the seventeenth century At one time consciousness was viewed with skepticism by many scientists, but in recent years it has become a significant topic of research in psychology, neuropsychology and neuroscience. The primary focus is on understanding what it means biologically and psychologically for information to be present in consciousness—that is, on determining the neural and psychological correlates of consciousness. The majority of experimental studies assess consciousness by asking human subjects for a verbal report of their experiences (e.g., "tell me if you notice anything when I do this"). Issues of interest include phenomena such as subliminal perception, blindsight, denial of impairment, and altered states of consciousness produced by drugs and alcohol, or spiritual or meditative techniques. Etymology and early history[edit] John Locke, British philosopher active in the 17th century In the dictionary[edit] Philosophy of mind[edit]

Awareness Concept[edit] Awareness is a relative concept. An animal may be partially aware, may be subconsciously aware, or may be acutely unaware of an event. Awareness may be focused on an internal state, such as a visceral feeling, or on external events by way of sensory perception. Awareness provides the raw material from which animals develop qualia, or subjective ideas about their experience. Self-awareness[edit] Main article: Self-awareness Popular ideas about consciousness suggest the phenomenon describes a condition of being aware of one's awareness or, self-awareness.[2] Efforts to describe consciousness in neurological terms have focused on describing networks in the brain that develop awareness of the qualia developed by other networks.[3] Neuroscience[edit] Neural systems that regulate attention serve to attenuate awareness among complex animals whose central and peripheral nervous system provides more information than cognitive areas of the brain can assimilate. Basic awareness[edit]

Living Homegrown — Exploring how to live homegrown, local and fresh from the garden Naturally Fermented Dill Pickles Welcome! If you want to lose weight, gain muscle, increase energy levels or just generally look and feel healthier you've come to the right place. Here's where to start: Visit the Start Here and Primal Blueprint 101 pages to learn more about the Primal Lifestyle. Thanks for visiting! Of all the food transformations that occur in a kitchen, few are as exciting as that of a cucumber into a pickle. If it’s so easy to transform a cucumber into a pickle, though, then why are grocery store shelves filled with so many mediocre specimens? There are brands of naturally fermented pickles to be found in stores, although they can be expensive. As much as you will love your first batch of homemade pickles, also be prepared for your mind to immediately start coming up with new variations. This recipe is for one jar of pickles but can easily be doubled, which is a good thing. Ingredients: 6-8 small (3-4 inches long) un-waxed cucumbers. Instructions: Combine salt and water and let sit until salt dissolves