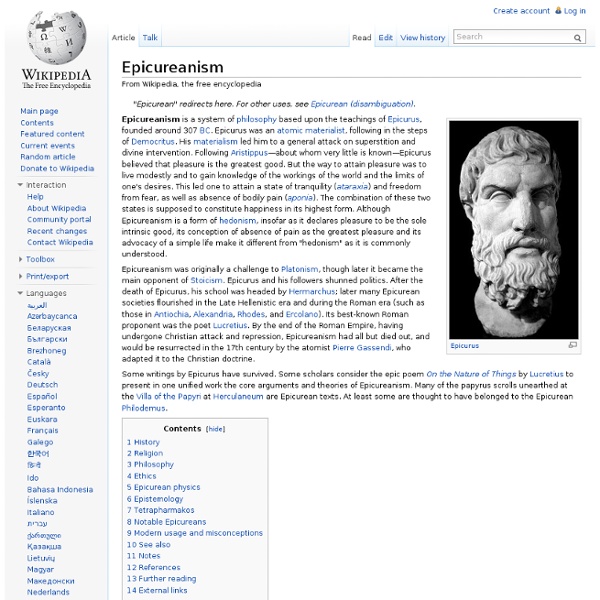 Epicureanism is a system of philosophy based upon the teachings of Epicurus, founded around 307 BC. Epicurus was an atomic materialist, following in the steps of Democritus. His materialism led him to a general attack on superstition and divine intervention. Following Aristippus—about whom very little is known—Epicurus believed that what he called "pleasure" is the greatest good, but the way to attain such pleasure is to live modestly and to gain knowledge of the workings of the world and the limits of one's desires. This led one to attain a state of tranquility (ataraxia) and freedom from fear, as well as absence of bodily pain (aponia). Epicureanism was originally a challenge to Platonism, though later it became the main opponent of Stoicism. Some writings by Epicurus have survived. History[edit] The early Christian writer Lactantius criticizes Epicurus at several points throughout his Divine Institutes. Religion[edit] Philosophy[edit] "Live unknown was one of [key] maxims. Ethics[edit]

About JeSaurai which means “I will know” in French, is a global webzine covering the stories behind and around the story of the day. JeSaurai started back in 2003, was relaunched in 2005 with a new design and also put out a print edition in 2007. It went away for a little before a brand new news/magazine format was launched in 2011. The world is changing media moguls are crumbling and new ideas are sprouting everywhere which need a voice, we aim to play a large part in a new world. JeSaurai’s goal remains the same as it was in 2003, to inform about the people, places, events, ideas, food and drink that you are not exposed to in your day to day media consumption. Many people ask why we have a French name when the majority of the articles are in English. JeSaurai prides itself on publishing independant, thoughtful and unique articles which are not easily slotted into neat categories. We need you to contribute articles and money, and encourage your comments on all our articles. Learn and enjoy.

Asceticism - Wikipedia, the free encyclopedia - Aurora Asceticism (/əˈsɛtɪsɪz(ə)m/; from the Greek: ἄσκησις áskēsis, "exercise" or "training") is a lifestyle characterized by abstinence from various worldly pleasures, often with the aim of pursuing spiritual goals. Many religious traditions, such as Hinduism, Buddhism, Jainism, and some Christian groups (for example, the Desert Fathers) include practices that involve restraint with respect to actions of body, speech, and mind. The founders and earliest practitioners of these religions lived extremely austere lifestyles, refraining from sensual pleasures and the accumulation of material wealth. They practised asceticism not as a rejection of the enjoyment of life, or because the practices themselves are virtuous, but as an aid in the pursuit of physical and metaphysical health. They eschewed worldy pleasures and led an abstemious lifestyle. Etymology[edit] The adjective "ascetic" derives from the ancient Greek term askēsis, which means training or exercise. Religious motivation[edit]

Zeno's paradoxes Zeno's arguments are perhaps the first examples of a method of proof called reductio ad absurdum also known as proof by contradiction. They are also credited as a source of the dialectic method used by Socrates.[3] Some mathematicians and historians, such as Carl Boyer, hold that Zeno's paradoxes are simply mathematical problems, for which modern calculus provides a mathematical solution.[4] Some philosophers, however, say that Zeno's paradoxes and their variations (see Thomson's lamp) remain relevant metaphysical problems.[5][6][7] The origins of the paradoxes are somewhat unclear. Paradoxes of motion[edit] Achilles and the tortoise[edit] Distance vs. time, assuming the tortoise to run at Achilles' half speed Dichotomy paradox[edit] Suppose Homer wants to catch a stationary bus. The resulting sequence can be represented as: This description requires one to complete an infinite number of tasks, which Zeno maintains is an impossibility. There are two versions of the dichotomy paradox.

Friedrich Nietzsche 1. Life: 1844–1900 In the small German village of Röcken bei Lützen, located in a rural farmland area southwest of Leipzig, Friedrich Wilhelm Nietzsche was born at approximately 10:00 a.m. on October 15, 1844. The date coincided with the 49th birthday of the Prussian King, Friedrich Wilhelm IV, after whom Nietzsche was named, and who had been responsible for Nietzsche's father's appointment as Röcken's town minister. Nietzsche's uncle and grandfathers were also Lutheran ministers, and his paternal grandfather, Friedrich August Ludwig Nietzsche (1756–1826), was further distinguished as a Protestant scholar, one of whose books (1796) affirmed the “everlasting survival of Christianity.” When Nietzsche was nearly 5 years old, his father, Karl Ludwig Nietzsche (1813–1849) died from a brain ailment (July 30, 1849) and the death of Nietzsche's two-year-old brother, Ludwig Joseph, traumatically followed six months later (January 4, 1850). 2. 3. 4. 5. 6. 7.

Platonism - Wikipedia, the free encyclopedia - Aurora Platonism (with a capital "P") is the philosophy of Plato or the name of other philosophical systems considered closely derived from it. With a lower case "p", "platonism" refers to the philosophy that affirms the existence of abstract objects, which are asserted to "exist" in a "third realm distinct both from the sensible external world and from the internal world of consciousness, and is the opposite of nominalism (with a lower case "n").[1] Lower case "platonists" need not accept any of the doctrines of Plato.[1] Philosophy[edit] The primary concept is the Theory of Forms. The only true being is founded upon the forms, the eternal, unchangeable, perfect types, of which particular objects of sense are imperfect copies. [Socrates:]"Since the beautiful is opposite of the ugly, they are two." Platonist ethics is based on the Form of the Good. History[edit] The Academy[edit] Site of Plato's Academy in Athens Around 266 BC, Arcesilaus became head of the Academy. Middle Platonism[edit]

Socrates Socrates (/ˈsɒkrətiːz/;[2] Greek: Σωκράτης [sɔːkrátɛːs], Sōkrátēs; 470/469 – 399 BC)[1] was a classical Greek (Athenian) philosopher credited as one of the founders of Western philosophy. He is an enigmatic figure known chiefly through the accounts of classical writers, especially the writings of his students Plato and Xenophon and the plays of his contemporary Aristophanes. Plato's dialogues are among the most comprehensive accounts of Socrates to survive from antiquity, though it is unclear the degree to which Socrates himself is "hidden behind his 'best disciple', Plato".[3] Through his portrayal in Plato's dialogues, Socrates has become renowned for his contribution to the field of ethics, and it is this Platonic Socrates who lends his name to the concepts of Socratic irony and the Socratic method, or elenchus. Socratic problem Nothing written by Socrates remains extant. Socrates as a figure Socrates as a philosopher Biography Early life Military service Arrest of Leon Trial and death Notes

Dokkōdō The "Dokkōdō" [ (Japanese: 独行道?); "The Path of Aloneness", "The Way to Go Forth Alone", or "The Way of Walking Alone"] is a short work written by Miyamoto Musashi (宮本 武蔵) a week before he died in 1645. It consists of either nineteen or twenty-one precepts; precepts 4 and 20 are omitted from the former version. Precepts[edit] References[edit] Stoicism - Wikipedia, the free encyclopedia - Aurora School of Hellenistic Greek philosophy Stoicism is a school of Hellenistic philosophy which was founded by Zeno of Citium, in Athens, in the early 3rd century BC. Stoicism is a philosophy of personal ethics informed by its system of logic and its views on the natural world. According to its teachings, as social beings, the path to eudaimonia (happiness) for humans is found in accepting the moment as it presents itself, by not allowing oneself to be controlled by the desire for pleasure or fear of pain, by using one's mind to understand the world and to do one's part in nature's plan, and by working together and treating others fairly and justly. Stoicism flourished throughout the Roman and Greek world until the 3rd century AD, and among its adherents was Emperor Marcus Aurelius. Name[edit] Stoicism was originally known as ‘Zenonism’, after the founder Zeno of Citium. Sometimes Stoicism is therefore referred to as just ‘The Stoa’, or the philosophy of ‘The Porch’.[5] Basic tenets[edit]

Zeno of Elea Zeno of Elea (/ˈziːnoʊ əv ˈɛliə/; Greek: Ζήνων ὁ Ἐλεάτης; c. 490 – c. 430 BC) was a pre-Socratic Greek philosopher of southern Italy and a member of the Eleatic School founded by Parmenides. Aristotle called him the inventor of the dialectic.[1] He is best known for his paradoxes, which Bertrand Russell has described as "immeasurably subtle and profound".[2] Life[edit] Other perhaps less reliable details of Zeno's life are given by Diogenes Laërtius in his Lives and Opinions of Eminent Philosophers,[5] where it is reported that he was the son of Teleutagoras, but the adopted son of Parmenides, was "skilled to argue both sides of any question, the universal critic," and that he was arrested and perhaps killed at the hands of a tyrant of Elea. According to Plutarch, Zeno attempted to kill the tyrant Demylus, and failing to do so, "with his own teeth bit off his tongue, he spit it in the tyrant’s face Works[edit] Zeno's paradoxes[edit] See also[edit] Notes[edit] References[edit]

Orphism (religion) - Wikipedia, the free encyclopedia - Aurora Orphic mosaics were found in many late-Roman villas Orphism (more rarely Orphicism) (Ancient Greek: Ὀρφικά) is the name given to a set of religious beliefs and practices[1] originating in the ancient Greek and the Hellenistic world,[2] as well as by the Thracians,[3] associated with literature ascribed to the mythical poet Orpheus, who descended into Hades and returned. Orphics also revered Persephone (who annually descended into Hades for a season and then returned) and Dionysus or Bacchus (who also descended into Hades and returned). Orpheus was said to have invented the Mysteries of Dionysus.[4] Poetry containing distinctly Orphic beliefs has been traced back to the 6th century BC[5] or at least 5th century BC, and graffiti of the 5th century BC apparently refers to "Orphics".[6] The main elements of Orphism differed from popular ancient Greek religion in the following ways: Compare with Christianity, Hinduism, Buddhism and Gnosticism. I am a son of Earth and starry sky.

Immanuel Kant Immanuel Kant (/kænt/;[1] German: [ɪˈmaːnu̯eːl kant]; 22 April 1724 – 12 February 1804) was a German philosopher who is widely considered to be a central figure of modern philosophy. He argued that fundamental concepts structure human experience, and that reason is the source of morality. His thought continues to have a major influence in contemporary thought, especially the fields of metaphysics, epistemology, ethics, political philosophy, and aesthetics.[2] Kant's major work, the Critique of Pure Reason (Kritik der reinen Vernunft, 1781),[3] aimed to explain the relationship between reason and human experience. With this project, he hoped to move beyond what he took to be failures of traditional philosophy and metaphysics. Kant argued that our experiences are structured by necessary features of our minds. Kant aimed to resolve disputes between empirical and rationalist approaches. Biography[edit] Young Kant was a solid, albeit unspectacular, student. Young scholar[edit] Early work[edit]