Links to hundreds of Psychology studies running on the internet 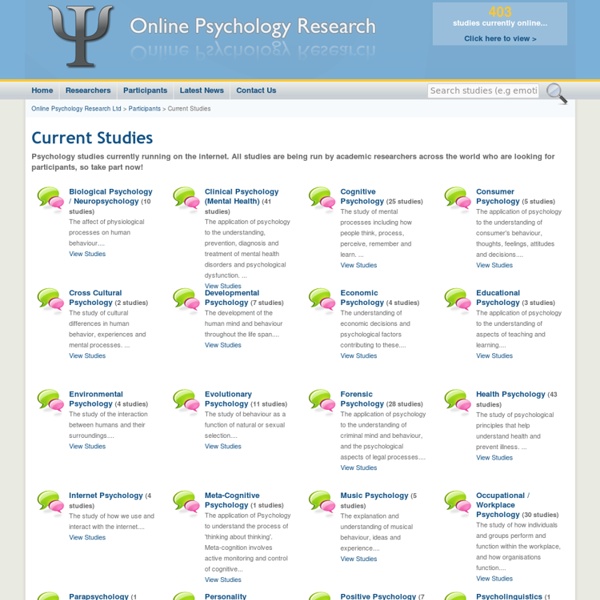 What Do Blind People See When They Dream? - DivineCaroline - StumbleUpon There’s a dream I had years ago that has always stayed with me, mostly because it was so unlike anything I’d experienced before. I dreamed that I was sleepwalking down a hallway painted in the most vibrant colors I’d ever seen and covered in an unrecognizable, hieroglyphic-like language. Upon waking, I marveled at my brain’s ability to create such fantastic imagery that I’d never seen in real life. I’ve heard people ask questions like, “Do blind people dream?” When the Sightless See In 1999, researchers at the University of Hartford set out to determine what, if anything, the blind can see while dreaming. It all depends on how long a person experiences the world with sight, as opposed to without. It’s similar to the black-and-white dream phenomenon some older individuals experience. People with sight tend to have highly visual dreams with some auditory qualities. Regardless of how we see, almost all of our dreams have a narrative quality.

The scientific argument for being emotional - Neuroscience At the end of his second year of Harvard graduate school, neuroscientist and bestselling author Richard Davidson did something his colleagues suspected would mark the end of his academic career: He skipped town and went to India and Sri Lanka for three months to “study meditation.” In the ’70s, just as today, people tended to lump meditation into the new-age category, along with things like astrology, crystals, tantra and herbal “remedies.” But contrary to what his skeptics presumed, not only did Davidson return to resume his studies at Harvard, his trip also marked the beginning of Davidson’s most spectacular body of work: neuroscientific research indicating that meditation (and other strictly mental activity) changes the neuroplasticity of the brain. Thirty years later, Davidson is still researching and writing about the intersection of neuroscience and emotion — he currently teaches psychology and psychiatry at the University of Wisconsin-Madison. That’s a great example.

How to Memorize Anything In college, I memorized 7 chapters of my psychology textbook — over 23,000 words. Yes, I could actually recite the entire 7 chapters to anyone willing to listen. Why did I do this? Determined to be the first student to ace his test, I memorized all 7 chapters. If you’re looking for a way to increase the capacity of your memory or pass a test, you don’t need to memorize 23,000 words. First, use a pencil or word processor (I prefer the latter because it’s faster) to type, in complete sentences, any fact you think might appear on the test. After a study session, take a quick nap. I eventually became so good at this technique that I could complete all my studying for any information heavy mid-term or final exam in less than 6 hours. I’m not saying you should ignore your classes until the last minute (please don’t — I rarely studied at the last minute myself), but it’s good to know there is a way to save yourself if you do. Does it Really Work? My best advice is to try it for yourself. Apr

Anatomy of the Great Adderall Drought Last May, Stephanie Lee couldn’t find a pharmacy in Atlanta that stocked Adderall, the prescription drug cocktail of amphetamine salts that helps her treat her attention deficit hyperactivity disorder, or ADHD. She called her local pharmacy. All amphetamine salts, as well as generic, extended release Adderall XR were nowhere to be found, thanks to a limit set on the amount of amphetamines produced every year by the federal government. Luckily, Stephanie’s insurance covered name-brand Adderall XR, so she was still intermittently able to get her prescription filled. At one point, she was trading some XR pills with her sister-in-law for amphetamine salts because pharmacies were all out. When the shortage began, Stephanie had just begun a new job. Today, Adderall is only legal in the United States and Canada. Everybody’s favorite focus drug For many people with ADHD, Adderall is what best manages their symptoms. Click graphic to see a larger version Quotas must be insufficient

THE DRUG DOES WORK Buy a bottle of perfume and you could pay as much for its advertising as its contents. The Sceptical Shopper sniffs out some niche alternatives ... From INTELLIGENT LIFE magazine, January/February 2012 Wearing scent is one of life’s pleasures. Heavily advertised, widely worn perfumes can smell good. Unfortunately, having a bespoke perfume made just for you will cost upwards of £600 for 100ml of eau de parfum (the most concentrated form of perfume), whereas a similar volume of a globally available brand typically costs £70. What, if any, is the actual difference? Mass-market perfumes often nab you from the first sniff—they put all the bang into their top notes, because they want an instant sale. Stockists juliettehasagun.com; nezanez.net; coudray-parfumeur.com Illustration by Richard Rockwood Read the Sceptical Shopper on paint, men's watches, iPad cases, coffee and more

How to increase serotonin in the human brain without drugs Never too soon: Means to reduce violence may start in utero It's hard to think of a baby being violent or destructive, but the seeds of violence may be planted before a child is born, according to research at the University of Pennsylvania School of Nursing. Attention to health factors as early as the prenatal stage could prevent violence in later life, reports Penn Nursing Assistant Professor Jianghong Liu, PhD, RN, in the journal Aggression and Violent Behavior. Recent research demonstrates a biological basis of crime, says Dr. Liu. Dr. Evidence shows that the risk factors for delinquency and crime begin early in life and that the brain undergoes the most critical development in children in the first 36 months, highlighting the importance of early intervention. Among the early health risk factors Dr. "Violence affects everyone in society and the cost of violence also has an indirect impact on our lives," says Dr. In this capacity, nurses can have a central role in prenatal care, says Dr.

New brain connections form in clusters during learning New connections between brain cells emerge in clusters in the brain as animals learn to perform a new task, according to a study published in Nature on February 19 (advance online publication). Led by researchers at the University of California, Santa Cruz, the study reveals details of how brain circuits are rewired during the formation of new motor memories. The researchers studied mice as they learned new behaviors, such as reaching through a slot to get a seed. They observed changes in the motor cortex, the brain layer that controls muscle movements, during the learning process. Specifically, they followed the growth of new "dendritic spines," structures that form the connections (synapses) between nerve cells. "For the first time we are able to observe the spatial distribution of new synapses related to the encoding of memory," said Yi Zuo, assistant professor of molecular, cell and developmental biology at UC Santa Cruz and corresponding author of the paper.

Sum of bilingual baby's ability equal to others › News in Science (ABC Science) News in Science Monday, 20 February 2012 Kerry SheridanAFP Dual learning Babies who are raised in homes where more than one language is spoken may appear to talk later than those learning just one language, leaving parents puzzled and concerned as to the reasons why. But they need not worry says one US researcher. Conventional wisdom often suggests that bilingual children are confused and so they take longer to talk. "Both of these views are wrong," says University of Florida Atlantic psychologist Erika Hoff who is presenting at the American Association for the Advancement of Science meeting in Vancouver. "It is not the case that hearing two languages confuses the child and impairs their ability to acquire anything. Instead, psychologists should take a different approach to testing young children, one that measures their proficiency in both languages instead of just one. Merits of self-reporting Highlights other disorders "About four-fifths of children will recover.