Cinematic VR Crash Course - Produce Virtual Reality Films. “[VR is] the next major computing platform that will come after mobile. 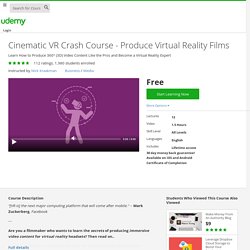 " -- Mark Zuckerberg, Facebook Are you a filmmaker who wants to learn the secrets of producing immersive video content for virtual reality headsets? Then read on.. People interested in cinematic VR drown in the waterfall of tech news, become demotivated by the utter lack of clear information, and get lost in the jungle of obscure internet fora in search of much needed tips and tricks. This is why many simply give up.. Do you ever feel overwhelmed by the amount of problems you need to solve before you can finally start shooting some content? The Cinematic VR Crash Course teaches you everything you need to know to start shooting your own mind-bending cinematic VR experiences. Concepts are introduced gradually, so that even a beginner will be able to follow along and become a virtual reality expert in no-time! Upon successful completion of this course you will be able to:

The Lion King Musical in VR Is an Incredible Experience. If you’ve seen Disney’s The Lion King on Broadway, it’s likely that you’ve never seen anything else quite like it. 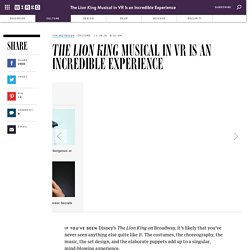 The costumes, the choreography, the music, the set design, and the elaborate puppets add up to a singular, mind-blowing experience. But even if you’ve seen the show from the best seat in the house, you haven’t seen anything like the new VR video of the show’s opening number. If you’re in the show, or if you’ve viewed your fair share of VR content, you’ve still never seen anything like this.

So, you should watch it. Vrse: Storytelling for Virtual Reality. How The NY Times Is Sparking the VR Journalism Revolution. Street artists normally work in the shadows. 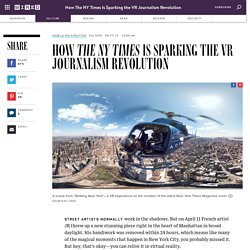 But on April 11 French artist JR threw up a new stunning piece right in the heart of Manhattan in broad daylight. His handiwork was removed within 24 hours, which means like many of the magical moments that happen in New York City, you probably missed it. A New VR Experience Puts You in Bryce Harper’s Mind and Cleats. In these early days of virtual reality, the content is rather unorthodox. 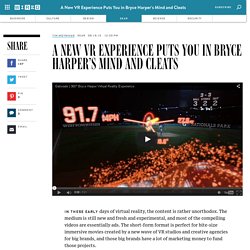 The medium is still new and fresh and experimental, and most of the compelling videos are essentially ads. The short-form format is perfect for bite-size immersive movies created by a new wave of VR studios and creative agencies for big brands, and those big brands have a lot of marketing money to fund those projects. To date, we’ve seen very cool VR brand experiences from Marriott, from Cedar Point amusement park, and from Marvel for The Avengers: Age of Ultron, to name just a few. Now, Gatorade is getting into the VR act in honor of its 50th anniversary. A new short live-action-and-CGI piece, which was developed in collaboration with communications company OMD and production company The Mill, puts you in the batter’s box at Nationals Park in Washington, D.C. Then you become Bryce Harper. Click to Open Overlay Gallery Dario Raciti, U.S. “We worked with (The Mill) to build the appropriate rig,” says Raciti. How a Pixar Vet Is Shaping the Future of VR Storytelling.

As we’ve noted many times on this site, virtual reality is the Wild West of filmmaking. 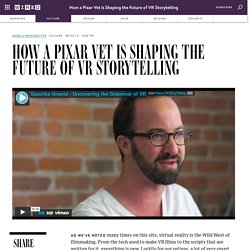 From the tech used to make VR films to the scripts that are written for it, everything is new. Luckily for our retinas, a lot of very smart people are trying to figure it out. High at the top of that list: Saschka Unseld, the Pixar veteran who is now the creative director of Oculus Story Studio. Through the two VR experiences Story Studio has made already—Lost and Henry—and the ones it has forthcoming, Unseld and his team are slowly learning the grammar of what plays well inside a headset. These FX Wizards May Have Solved VR Films’ Biggest Problem.

Sebastian Marino already has an Academy Award for his special-effects work on James Cameron’s Avatar, but the other evening he became a director, and staged a tiny shoot in his apartment. 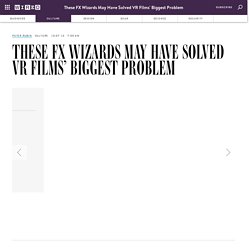 He and a small crew set up an array of cameras and filmed two actresses in front of a green screen. Only one of them delivered lines. “I imagine you’re feeling a bit like Alice right now,” she said enigmatically, “tumbling down the rabbit hole. Like her, I would suggest that you choose carefully.” She pointed in one direction, then another. Lytro Immerge: Groundbreaking Camera Will Let You Move Around in VR Video. Ever since Lytro burst onto the scene with its first light-field camera three years ago, it’s done things very differently.

The company’s imaging technology has always been groundbreaking: They make still cameras that allow you to capture a shot, then decide where to focus and how to adjust the depth-of-field after the fact. All of a sudden, “fix it in post” applied to things that were never before possible in still photography—with a single camera, at least. But Lytro’s first two cameras weren’t smash hits, for good reason. The company’s first consumer product, a little kaleidoscope-looking shooter with basic controls and a tiny viewfinder screen, was extremely limited for its $400-to-$500 price. Its second camera, the Lytro Illum, looked more like a DSLR and offered deeper controls. Oculus’ New Tool Lets You Animate Films Inside of VR.

Last fall, after weeks of frustration, Inigo Quilez sent an email to his bosses at Oculus Story Studio that essentially said This isn’t working. 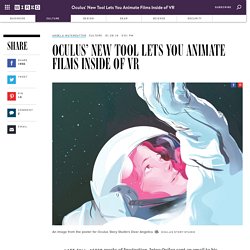 The visual effects supervisor had been trying to make headway on the studio’s virtual reality movie Dear Angelica, but it just didn’t look right. “We were trying to transform 2-D illustrations into VR and it wasn’t looking good enough,” Quilez says. “So I was like, ‘No one is doing anything about it.'” To find a solution, Quilez asked for a two-week sabbatical from his normal duties. By the end of it, he’d coded an entirely new program that allows artists to paint completely within a VR environment using an Oculus Rift headset and the company’s Touch controllers. At least, it had better be: Wesley Allsbrook is moving her life across the country to use it. Virtual reality filmmaking. Behind the scenes of virtual reality: how to create 360-degree video - Primacy. The latest buzzword in the tech world is virtual reality (VR). 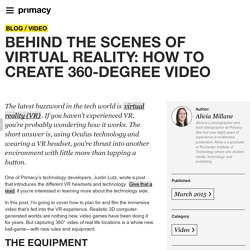 Technology - Jaunt. 6 Rules for Making Movies in the VR Age. Making movies for virtual reality is unlike any previous kind of filmmaking. 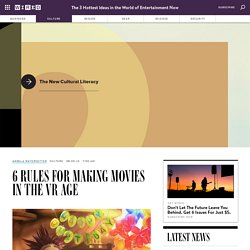 You can’t “frame” a 360-degree shot. There are no cuts. And, weirdly enough, the characters can know you’re there. It lets filmmakers surround you with their world, but it also means they have to factor in a lot more to make sure they don’t just immerse you in an uncanny valley. We asked Oculus Story Studio’s creative director Saschka Unseld and character lead Bernhard Haux to explain that process for Henry, their bittersweet animated short about a balloon-loving hedgehog. Make Eye Contact Because viewers are in Henry’s space, he does something almost no other protagonist has done before: look them in the eye.