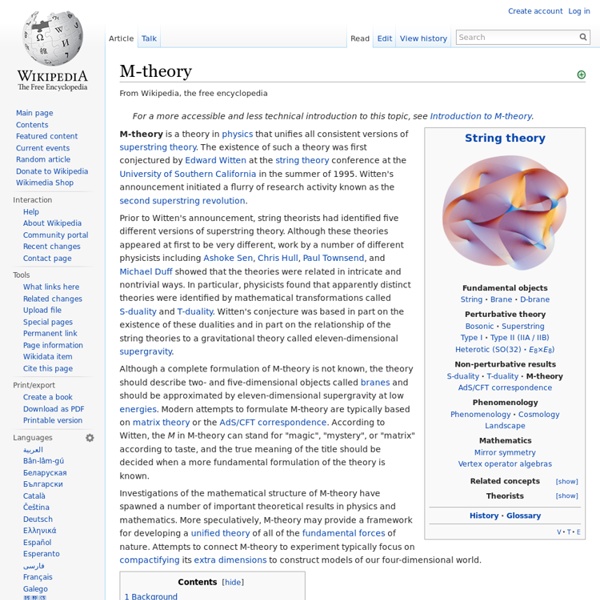 M-theory is a theory in physics that unifies all consistent versions of superstring theory. The existence of such a theory was first conjectured by Edward Witten at the string theory conference at the University of Southern California in the summer of 1995. Witten's announcement initiated a flurry of research activity known as the second superstring revolution. Background[edit] Quantum gravity and strings[edit] One of the deepest problems in modern physics is the problem of quantum gravity. Number of dimensions[edit] In everyday life, there are three familiar dimensions of space (up/down, left/right, and forward/backward), and there is one dimension of time (later/earlier). Despite the obvious relevance of four-dimensional spacetime for describing the physical world, there are several reasons why physicists often consider theories in other dimensions. Dualities[edit] Main articles: S-duality and T-duality A diagram of string theory dualities. and winding number in the dual description. .

Introduction to M-theory In non-technical terms, M-theory presents an idea about the basic substance of the universe. Background[edit] In the early years of the 20th century, the atom – long believed to be the smallest building-block of matter – was proven to consist of even smaller components called protons, neutrons and electrons, which are known as subatomic particles. Beginning in the 1960s, other subatomic particles were discovered. In the 1970s, it was discovered that protons and neutrons (and other hadrons) are themselves made up of smaller particles called quarks. Quantum theory is the set of rules that describes the interactions of these particles. In the 1980s, a new mathematical model of theoretical physics called string theory emerged. These "strings" vibrate in multiple dimensions, and depending on how they vibrate, they might be seen in three-dimensional space as matter, light, or gravity. Status[edit] See also[edit] Superstring theory References[edit] Further reading[edit] External links[edit]

11: Number theory Introduction Number theory is one of the oldest branches of pure mathematics, and one of the largest. Of course, it concerns questions about numbers, usually meaning whole numbers or rational numbers (fractions). Elementary number theory involves divisibility among integers -- the division "algorithm", the Euclidean algorithm (and thus the existence of greatest common divisors), elementary properties of primes (the unique factorization theorem, the infinitude of primes), congruences (and the structure of the sets Z/nZ as commutative rings), including Fermat's little theorem and Euler's theorem extending it. But the term "elementary" is usually used in this setting only to mean that no advanced tools from other areas are used -- not that the results themselves are simple. The remaining parts of number theory are more or less closely allied with other branches of mathematics, and typically use tools from those areas. Other areas of number theory are also quite analytical. History Subfields

Number theory Number theory (or arithmetic[note 1]) is a branch of pure mathematics devoted primarily to the study of the integers, sometimes called "The Queen of Mathematics" because of its foundational place in the discipline.[1] Number theorists study prime numbers as well as the properties of objects made out of integers (e.g., rational numbers) or defined as generalizations of the integers (e.g., algebraic integers). Integers can be considered either in themselves or as solutions to equations (Diophantine geometry). Questions in number theory are often best understood through the study of analytical objects (e.g., the Riemann zeta function) that encode properties of the integers, primes or other number-theoretic objects in some fashion (analytic number theory). One may also study real numbers in relation to rational numbers, e.g., as approximated by the latter (Diophantine approximation). The older term for number theory is arithmetic. History[edit] Origins[edit] Dawn of arithmetic[edit] such that .

Grand Unified Theory A Grand Unified Theory (GUT) is a model in particle physics in which at high energy, the three gauge interactions of the Standard Model which define the electromagnetic, weak, and strong interactions, are merged into one single interaction characterized by one larger gauge symmetry and thus one unified coupling constant. During the grand unification epoch, the gauge force separated from the gravitational force. Models that do not unify all interactions using one simple Lie group as the gauge symmetry, but do so using semisimple groups, can exhibit similar properties and are sometimes referred to as Grand Unified Theories as well. Unifying gravity with the other three interactions would provide a theory of everything (TOE), rather than a GUT. Because their masses are predicted to be just a few orders of magnitude below the Planck scale, at the GUT scale, well beyond the reach of foreseen particle colliders experiments, novel particles predicted by GUT models cannot be observed directly.

Edward Witten Edward Witten (born August 26, 1951) is an American theoretical physicist and professor of mathematical physics at the Institute for Advanced Study in Princeton, New Jersey. Witten is a researcher in string theory, quantum gravity, supersymmetric quantum field theories, and other areas of mathematical physics. In addition to his contributions to physics, Witten's work has significantly impacted pure mathematics.[4] In 1990, he became the first physicist to be awarded a Fields Medal by the International Mathematical Union, awarded for his 1981 proof of the positive energy theorem in general relativity.[5] Early life and education[edit] Witten was born in Baltimore, Maryland, to a Jewish family.[6] He is the son of Lorraine (Wollach) Witten and Louis Witten, a theoretical physicist specializing in gravitation and general relativity.[7] Research[edit] Fields medal work[edit] In a written address to the ICM, Michael Atiyah said of Witten,[4] M-theory[edit] Other work[edit] Awards and honors[edit]