Why do Modern People have so few Children? If you’re reading this article, you probably believe that Darwinian theory can shed light on human behaviour. 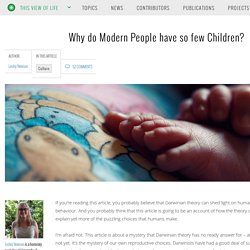 And you probably think that this article is going to be an account of how the theory can explain yet more of the puzzling choices that humans make. I’m afraid not. This article is about a mystery that Darwinian theory has no ready answer for – at least not yet. It’s the mystery of our own reproductive choices. Darwinists have had a good deal of success convincing the general public that evolutionary theory can provide a means of gaining an understanding of their own behaviour. Why are we producing so few children? At a superficial level, it isn’t puzzling.

But we Darwinists aren’t satisfied with superficial explanations so it’s time we discussed this. The desire to mate seems to be an important driver of reproduction in many non-human animals. The world as you've never seen it before. Pax Humanitas. Family Matters. Cohabitable. Collapsnickity.

Humanitas. Societal Gumbo. Human Condition. Close Quarters. Population Clock. Population 7 Billion - Pictures, More From National Geographic magazine. One day in Delft in the fall of 1677, Antoni van Leeuwenhoek, a cloth merchant who is said to have been the long-haired model for two paintings by Johannes Vermeer—“The Astronomer” and “The Geographer”—abruptly stopped what he was doing with his wife and rushed to his worktable. 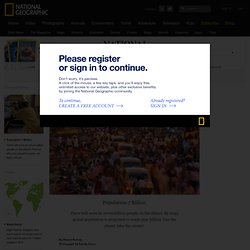 Cloth was Leeuwenhoek’s business but microscopy his passion. He’d had five children already by his first wife (though four had died in infancy), and fatherhood was not on his mind. “Before six beats of the pulse had intervened,” as he later wrote to the Royal Society of London, Leeuwenhoek was examining his perishable sample through a tiny magnifying glass. Its lens, no bigger than a small raindrop, magnified objects hundreds of times. Leeuwenhoek had made it himself; nobody else had one so powerful. Leeuwenhoek became a bit obsessed after that. Nobody then really had any idea; there were few censuses. Historians now estimate that in Leeuwenhoek’s day there were only half a billion or so humans on Earth.

Data Visualization Gallery. The Pattern which Connects from KaliYuga to Tao: Introduction. The basic thesis and the reason of this blog are that the current historical period can and must be symbolized (among many possible) with what is defined in the indian mythology KaliYuga, an age (Yuga) of destruction and death dominated by the hindu demon Kali. 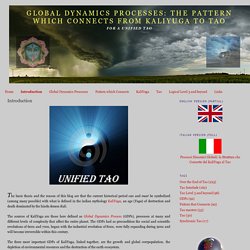 The sources of KaliYuga are those here defined as Global Dynamics Process (GDPs), processes at many and different levels of complexity that affect the entire planet. The GDPs had as precondition the social and scientific revolutions of 600s and 700s, began with the industrial revolution of 800s, were fully expanding during 900s and will become irreversible within this century. Overpopulation is a myth. All the populations of the world. World Population Prospects, the 2010 Revision. International Programs - People and Households. 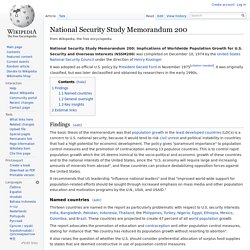 Security and Overseas Interests (NSSM200) was completed on December 10, 1974 by the United States National Security Council under the direction of Henry Kissinger. It was adopted as official U.S. policy by President Gerald Ford in November 1975[citation needed]. It was originally classified, but was later declassified and obtained by researchers in the early 1990s. Findings[edit] The basic thesis of the memorandum was that population growth in the least developed countries (LDCs) is a concern to U.S. national security, because it would tend to risk civil unrest and political instability in countries that had a high potential for economic development. 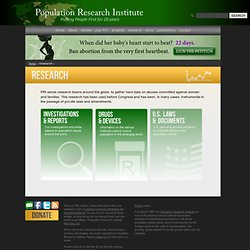 This research has been used before Congress and has been, in many cases, instrumental in the passage of pro-life laws and amendments. World Life Expectancy. Animal group terminology. 172 unusual names for groups of animals. Many species of animals, particularly those domesticated, have been given specific names for the male, the female, and the young of the species. 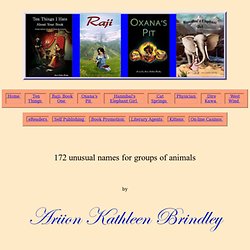 There are a few generic terms, "bull-cow-calf", for instance, that are found across species, but many species have been granted unique names for these gender/age characteristics. It is thought that many of the bizarre words used for collective groupings of animals were first published in 1486 in the Book of St. Albans, in an essay on hunting attributed to a Dame Juliana Barnes.

Many of the words are thought to be chosen simply for the humorous or poetic images they conjured up in her lively imagination. Story credit: Wikipedia, the free encyclopedia en.wikipedia.org Albatross come in groups called a rookery. StatPlanet Map Maker ? Interactive Mapping & Visualization Software.