The Nature of Reality 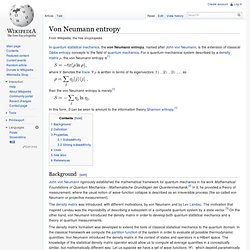 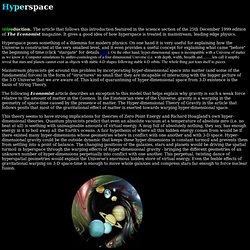 The article that follows this introduction featured in the science section of the 25th December 1999 edition of The Economist magazine. It gives a good idea of how hyperspace is treated in mainstream, leading edge physics. Hyperspace poses something of a dilemma for modern physics. On one hand it is very useful for explaining how the Universe is constructed at the very smallest level, and it even provides a useful concept for explaining what came "before" the beginning of time (click "stargate" for details µµµ). Quantum dot. Colloidal quantum dots irradiated with a UV light. 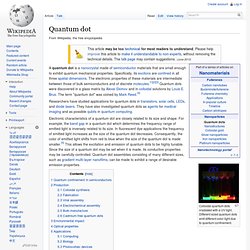 Different sized quantum dots emit different color light due to quantum confinement. Researchers have studied applications for quantum dots in transistors, solar cells, LEDs, and diode lasers. They have also investigated quantum dots as agents for medical imaging and as possible qubits in quantum computing. Electronic characteristics of a quantum dot are closely related to its size and shape. “Everybody wants to be transformed, but no-one wants to change” Water: Top Secret Masaru Emoto. HIDDEN MESSAGES IN WATER - Dr. Masaru Emoto Experiment With Meditation At Brahma Kumaris HQ. 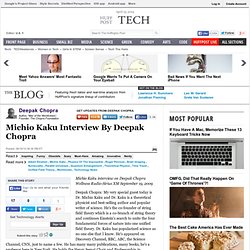 Michio Kaku and Dr. Kaku is a theoretical physicist and best-selling author and popular writer of science.

Quantum physics. Nassim Haramein on synchronicity. What the Bleep Do We Know!? This hard-to-describe movie, which combines talking-head documentary footage with a fictional narrative, attempts to explain quantum physics in terms most audiences can understand. 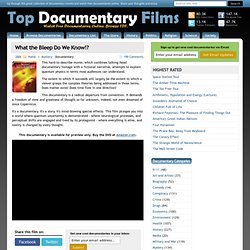 Subatomic Particles. Paul Davies, a cosmologist at Arizona State University in Tempe, admires the fact that Aharonov’s team has always striven to verify its claims experimentally. 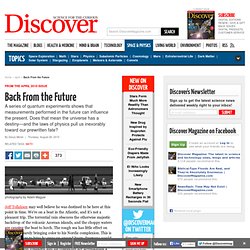 “This isn’t airy-fairy philosophy—these are real experiments,” he says. Davies has now joined forces with the group to investigate the framework’s implications for the origin of the cosmos (See “Does the Universe Have a Destiny?” Below). Quantum mechanics. Solution to Schrödinger's equation for the hydrogen atom at different energy levels. 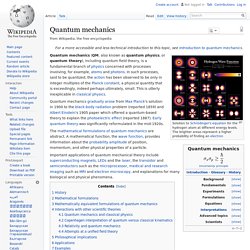 The brighter areas represent a higher probability of finding an electron Quantum mechanics gradually arose from Max Planck's solution in 1900 to the black-body radiation problem (reported 1859) and Albert Einstein's 1905 paper which offered a quantum-based theory to explain the photoelectric effect (reported 1887). Quantum field theory. Garrett Lisi: A beautiful new theory of everything. Athene’s Theory of Everything. Bachir "Chiren" Boumaaza, aka Athene, is an extravagant Internet celebrity, with over 240 million upload views, and a professional gamer. 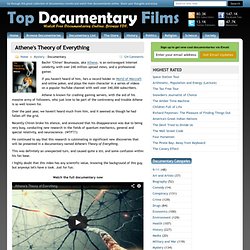 If you haven't heard of him, he's a record holder in World of Warcraft and online poker, and plays the main character in a series of videos on a popular YouTube channel with well over 340,000 subscribers. Athene is known for crashing gaming servers, with the aid of his massive army of followers, who just love to be part of the controversy and trouble Athene is so well known for. Over the past year, we haven't heard much from him, and it seemed as though he had fallen off the grid. Recently Chiren broke his silence, and announced that his disappearance was due to being very busy, conducting new research in the fields of quantum mechanics, general and special relativity, and neuroscience. M-theory. M-theory is a theory in physics that unifies all consistent versions of superstring theory. 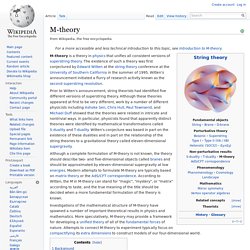 The existence of such a theory was first conjectured by Edward Witten at the string theory conference at the University of Southern California in the summer of 1995. Witten's announcement initiated a flurry of research activity known as the second superstring revolution. Background[edit] Quantum gravity and strings[edit] One of the deepest problems in modern physics is the problem of quantum gravity.

Number of dimensions[edit] In everyday life, there are three familiar dimensions of space (up/down, left/right, and forward/backward), and there is one dimension of time (later/earlier). Despite the obvious relevance of four-dimensional spacetime for describing the physical world, there are several reasons why physicists often consider theories in other dimensions. Dualities[edit] Main articles: S-duality and T-duality. Hyperspace. From Wikipedia, the free encyclopedia Hyperspace may refer to: In fiction: In technology: Internet, the World Wide Web. 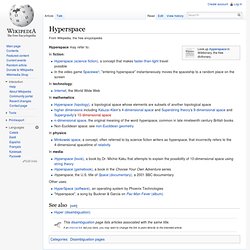 Hyperspace Physics. A Universe From Nothing (Lecture)